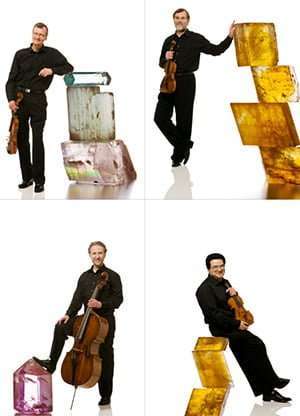 Whoever chose this programme knew what they were doing: three varied masterpieces, yet not so disparate as to appear to have been thrown together. Perhaps one might have looked for a linking thread or two – “old heads on young shoulders”, perhaps, or “young heads on old shoulders” (Brahms never appears “young” in that sense) – in which case perhaps Britten might be the connection, for he used to take miniature scores of Haydn String Quartets to bed to read, and he certainly changed his views about Brahms, as well as remaining familiar with his music.

Haydn and Britten is a terrific combination: here we could hear first-hand how much the latter learned from the former, though one doubts if even the East Anglian would have imagined a finer performance than that given by the Endellion Quartet, its playing of this centrifugal masterpiece of European art was incredibly fine. Tempos were absolutely right (the first-movement exposition repeat thankfully observed – not every ensemble I’ve heard does so), so too tuning, phrasing and that wondrous element of genuine chamber-music playing – the authentic ‘give-and-take’ of like-minded players, each secure in the knowledge of their colleagues’ artistry – was a joy. The work itself is wondrous – composed a few years after the crowning glories of the ‘London’ Symphonies, yet investing Haydn’s late creation of the genuine scherzo with brand-new structural inventiveness, such as would have caused Beethoven to suck a few hollow teeth. The very opening – those chords – recalled at the end; the dazzling surprises of the scherzo itself, and the depths of the slow movement – this is a great composer at his greatest in terms of original creativity.

What a composer! One might have said the same after the Britten: he must have known the Haydn before writing his scherzo (though it’s placed second, unlike Haydn’s), and that astoundingly original ingenuity of the young man (28 at the time), the imagination that begins a slow movement with rather so-so invention yet which becomes so much deeper and profound as to put most of his contemporaries writing quartets during World War Two in the shade. The Endellion members know this work intimately and they know how eminent and innovative it is: it was privilege to hear this performance.

Brahms’s Piano Quintet bought Benjamin Grosvenor to the platform, and the combination of youthful instinct and mature experience was just what this still-astonishing work needs, and although one or two aspects of tempo relationships were open to question – the 2/4 passages in the scherzo were less than organic, and a shade rushed – the result was a reading of no little depth and insight from all concerned. It was also good to hear the first-movement exposition repeat observed – absolutely essential, in structural terms. At times, though, I wondered if the piano might have blended better had the lid been on half stick: not that Grosvenor played too loudly, far from it, but with regard to internal balance it obtruded on the strings. This is not to criticise Grosvenor: he is exceptionally gifted, and on this showing a genuine chamber musician, whose contribution to this memorable concert was on a par with that of his colleagues.

I must commend Joanna Wyld’s programme notes – well written, intelligent and informative, although was the quote from Hermann Levi in the final paragraph correct? It seemed to be missing a “not”.