Delibes
Coppélia – comic ballet in three Acts originally choreographed by Arthur Saint-Léon with a libretto by Charles Nuitter, the mise-en-scène based upon the stories Sandman and Die Puppe by ETA Hoffmann; this version’s choreography by Ronald Hynd after Marius Petipa 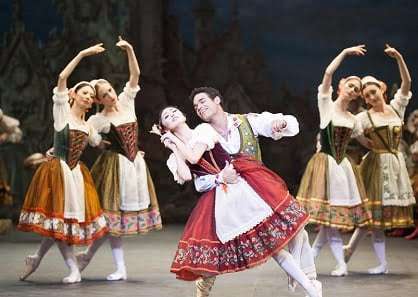 There are few ballets as delightful as Coppélia, and the United Kingdom is blessed with three productions which can claim direct lineage to the root of all modern interpretations, namely the 1894 Enrico Cecchetti revision by Marius Petipa (the original 1870 of Saint-Léon for Théâtre Imperial l’Opéra, Paris, is now lost). The Royal Ballet performs a re-creation of Ninette de Valois’s 1954 production; Birmingham Royal Ballet presents Peter Wright’s wholly satisfactory version, and English National Ballet possess Ronald Hynd’s thirty-year-old mise-en-scène, which is brightly revived at The Coliseum, and is set to tour. Its return is to be welcomed, for Coppélia, in a world of six o’clock legs, deep meaning or barely suppressed aggression is somewhat old-fashioned – warm, funny and superb entertainment. The company gives the ballet in Desmond Healey’s over-fussy design, which presents pleasing tableaux nonetheless, and his costumes are a delight, not least Swanilda’s last-Act dress, which is both fine and subtle.

A huge cheer for Gavin Sutherland and the Orchestra who have a ball with Delibes’s magical score, here returned, I understand, to the composer’s original orchestration, which features four bassoons. Sutherland can lay claim to being one of the most intelligent and sympathetic of dance conductors, such is his connection to the stage without allowing any compromise of musical standards. 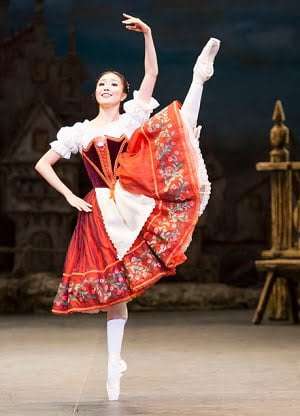 ENB is looking spry, and the dancers engage in this Ruritanian romp with evident relish, the mazurkas and the ‘Czárdás’ taken at a lick and with the requisite boot-tapping aplomb. A hint of raggedness in ensemble work encroached, the First Act ballabile betraying frayed musicality, and the Third Act festivities not always as synchronised as they could be. However, ballet is not gymnastics, and performance counts – the company possesses dancers of character, and they certainly give a performance, which is, ultimately, what counts. The choreography is no breeze either, and it is refreshing to see the demands that Hynd (and through him Cecchetti and Petipa) makes on all concerned – tight footwork, fast, clearly delineated movement, and a rounded softness in the arms, although far greater of the upper body pliancy that Cecchetti in particular requires to make the movement truly sing is needed in a fee places.

It is of note when a dancer of Tamara Rojo’s stature takes on the lead role, and doubly so given her position as the company Director. She is not a natural Swanilda – the demi-caractère quality the role requires simply does not come to her naturally, and we can see her work hard to achieve it – you could even argue that she was wrong to cast herself in the part, but an artist of her intelligence can bring much to something to which she may not seem at first suited. Technically, she sailed through the majority of the challenges, even if her movement could never be termed as soubrettish. There were also moments of genuine fun, not least in the shenanigans of the Second Act when Rojo seemed to let go a little and enjoy herself.

One of the joys of an ‘authentic’ Coppélia is the amount of mime it contains. Giving something of a masterclass was Michael Coleman as Coppélius, the dotty inventor who fashions the doll Coppélia and thereby setting the whole story in motion. Coleman understands the stage and what is needed to communicate with the audience, and portrayed a warm and sympathetic character.

Guest Artist Alban Lendorf, the toast of Copenhagen and the Royal Danish Ballet, played the village scamp Franz to perfection – his eyes twinkled and he, brought up on Bournonville’s story ballets, was more than adept at the role’s mime. In terms of dancing, he displayed a few weaknesses, but remained a considerable force, his Danish schooling apparent in every move, from his tight entrechats and perfectly pointed feet, to a springy jump. Both he and Rojo made light work of the final pas de deux and coda that crown this most enjoyable of ballets. Long live Coppélia!