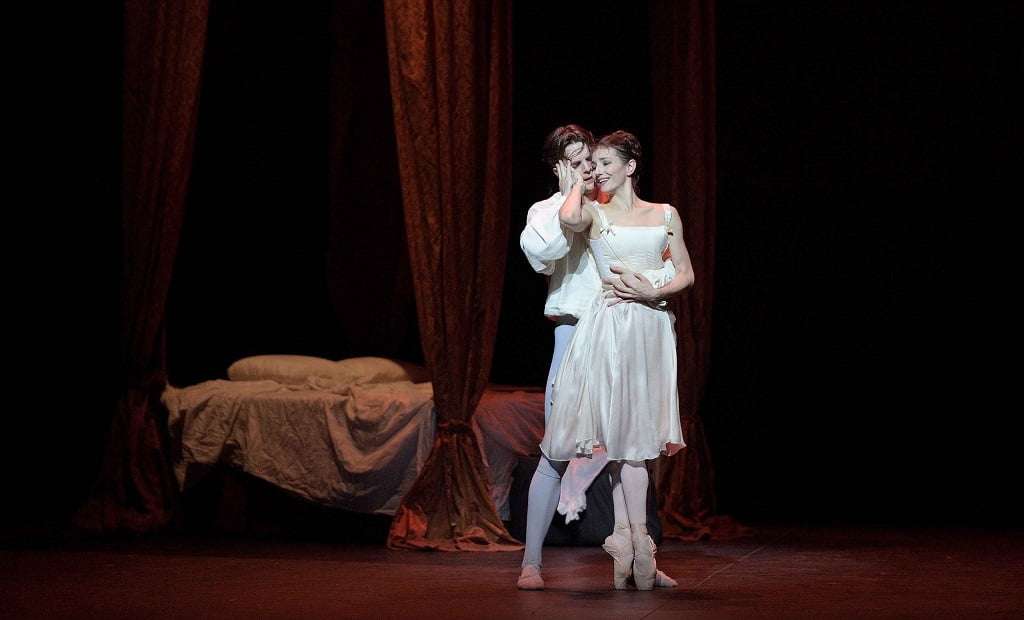 This is a fine revival of Kenneth MacMillan’s arguably most widely-loved full-length ballet; English National Ballet enter fully into its style and aesthetic even though, as a work, it is not part of the company DNA in the way it is with The Royal Ballet. The success is largely down to the impressive roster of coaches and teachers who have been called in: from the originator of the role of Des Grieux, Anthony Dowell, to Irek Mukhamedov, a great interpreter of that role and also the scheming Lescaut, and Viviana Durante, one of the finest ever Manons. Their careful work has borne fruit with a lively and focussed cast delivering MacMillan’s vision of Abbé Prévost’s tragic tale with style, and, even if the production (borrowed from Copenhagen) remains a shock to those used to Nicholas Georgiadis’s original, it produces a highly satisfying night at the theatre, down not least to an excellent quartet of main characters.

Musical standards are high under Orlando Jopling who, however, luxuriates in Massenet’s melodies perhaps a little too much; his tempos are over-indulgent, which only serves to slow the action and to pull at the seams of the choreography, robbing it at times of its sweep and urgency. 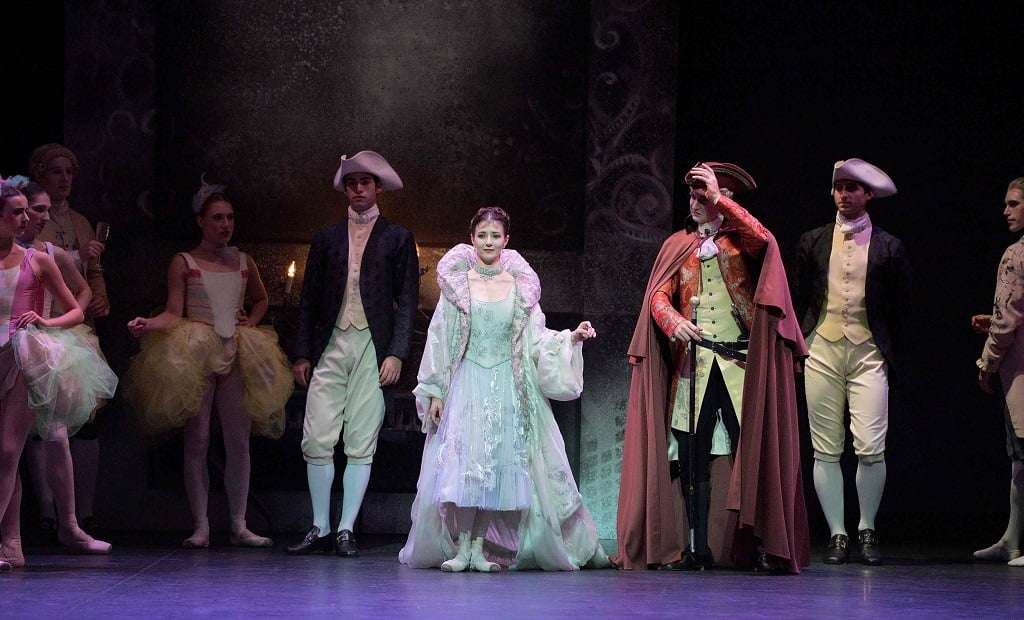 The set designs are impressive in their sparseness – the Act Three quayside simply features the silhouette of a ship – which means that much of the stage effects come from the lighting. This, alas, errs of the side of ‘atmospheric’ which means that in the Act Two brothel there is a suitably louche atmosphere but faces and, at times, bodies, are lost. Costumes are on the light side both literally in terms of their weight and also their colour – pale shades dominate and the brothel scene is graced with somewhat acid pastels. If there is an overall complaint, it is that it is all too nice, too clean for a tale set in the grubby Régence.

But the dancing is the thing, and in that all acquit themselves most honourably, from an elegant trio of dancing gentlemen to the preening courtesans. Named roles often have a different emphasis from when they are performed at Covent Garden – Monsieur G. M., always an older character dancer at The Royal, is here the svelte Junor Souza, who makes up with his vigour what he loses in aged corruption, while Daniel Kraus was a young, sexually predatory Gaoler, more emphatic in his pawing at Manon’s exhausted body than is usual. Crystal Costa made for a petite and distinctly pert Mistress, perhaps overdoing it a trifle with moues of her mouth and flashing of her eyes but in secure command of her choreography, while Lescaut, her amour, was danced with bravado by Ken Saruhashi. He gave a rounded portrayal of a scoundrel on the make, alive to every opportunity for profit – his opening solo was confidently danced and in his brothel ‘drunken’ duet with Costa he judged the comedy with astuteness. 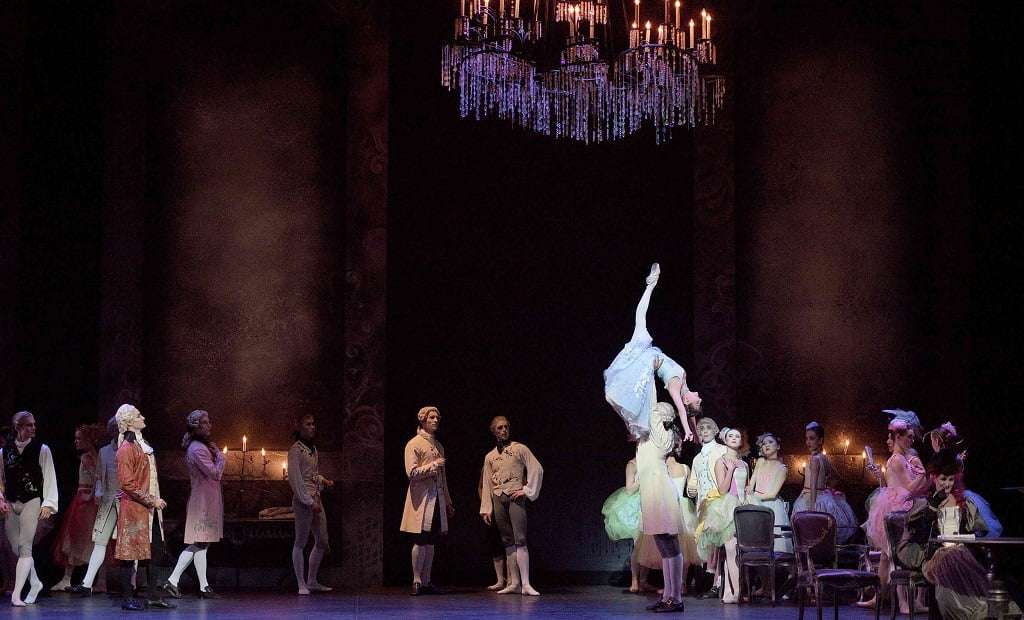 As the hapless Des Grieux, Aitor Arrieta had a great deal to recommend: a long-limbed elegance and subtle and detailed acting made his every appearance welcome as he traced the sorry story of a young innocent destroyed by his love for an amoral woman. Throughout, the beacon of his character’s goodness shone bright in his portrayal while there was no doubting his obsession for Manon. Perhaps the highlight was the second bedroom pas de deux where his deep love for her was sorely challenged by her clinging to the jewels of her courtesan life. He partnered strongly throughout, and it was in the final, desperate duet that he truly let rip and injected the note of danger which thrills an audience. In his own dancing, he is yet fully to develop the lyricism that the role requires (which characterised the dancing of Dowell perhaps more than anything). There was at times a jerky quality which sits oddly on this choreography which above all needs a seamlessness of execution to make it sing, and he needs to demonstrate greater epaulement and pliancy in his upper body.

Manon was Begoña Cao, who possesses all the attributes of a great Manon – from the off, she was a creature to beguile and seduce. She gave the smallest gesture meaning, made a simple glance drip with emotion and was exquisite in her use of hands and arms. In this she reminded one of Durante, which is no small compliment. Equally, her feet were beautifully placed and used, the fluttering bourrées Manon uses at several points notable in their lightness and tightness, while she was unafraid to be ‘ugly’ in the final scenes as exhaustion and illness hasten her demise. Cao’s Manon is a superb portrayal, in the finest traditions of the role, yet unmistakably her own.