Tchaikovsky
The Nutcracker, Op.71 – Ballet in two Acts to choreography by Wayne Eagling after Lev Ivanov, based on an original scenario by Marius Petipa after E. T. A. Hoffmann’s Nussknacker und Mausekönig 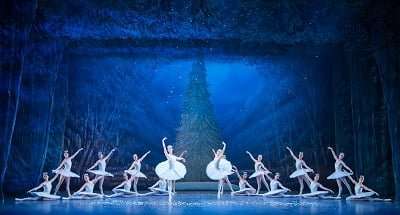 Excited children, slightly begrudging family groups and foreign tourists happy to have secured tickets – a typical Nutcracker audience in the run-up to Christmas, and an opportunity for the cash-strapped English National Ballet to fill its coffers a little. Wayne Eagling’s production, handsomely set by veteran ballet designer Peter Farmer, is now in its fifth season, and it displays the strengths and weaknesses it always has, not least of the latter for those used to Peter Wright’s impeccable stagings for both The Royal and Birmingham Royal Ballets, is a lack of dramatic logic. But with the ever-alert company orchestra under the watchful eye and baton of Music Director Gavin Sutherland lending strong musical underpinning, and some genuinely first-rate performances, the production carries the day, and tots, grannies and visitors go away content.

At the centre of this performance is the remarkable dancing of Alina Cojocaru. This beautiful dancer swapped the glamour of Covent Garden for a more precarious existence with ENB; her departure, closely following that of Tamara Rojo to lead ENB, left The Royal with a serious gap at the top of its ranks, a gap that remains for the large part unfilled, despite the hasty acquisition of Russian superstar Natalia Osipova. Cojocaru is on sparkling form, a true ballerina (the title is much bandied about and rarely correctly awarded) and an object lesson in how to fuse technical accomplishment with genuine lyricism, and an unforced but effective musicality. In all her appearances she draws the eye to her: her use of back, arms and hands adding grace-notes to the pin-point accuracy of her leg and foot-work. 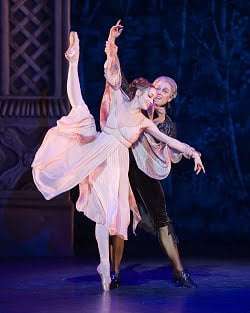 Cojocaru’s partner was a new arrival to ENB, Alejandro Virelles, whose cat’s paw landings and noble carriage are trademarks of his Cuban training. What he lacks at present is much of a stage personality – he smiles sweetly enough and is a solicitous cavalier and his dancing has a legato quality without yet any stamp of individuality. That may come. They make for a handsome couple, and with Cojocaru leading the way, their second-Act grand pas de deux was a highlight.

The company around them is looking good, despite the messiness of Eagling’s first-Act party – someone really has to tell the guests that scenery-chewing acting and (un)funny walks are not really what is required; the Waltzes of the Snowflakes and of the Flowers showed a corps de ballet with a pleasing uniformity of attack and some impressive soloist dancing: Laurretta Summerscales was the model of elegance in both, and the latter also presented twin brothers Guilherme and Vitor Menezes as the lead cavaliers – their identical body type, musculature and placement must be a ballet director’s dream (at the Cuban National Ballet School, there are, at present, the identical Castellano triplets making their way through their dance education – so watch this space!).

Ksenia Ovsyanick made light work of the considerable demands of Eagling’s Mirlitons divertissement, here an exotic butterfly partnered by James Streeter’s benign Drosselmeyer. I regret the changes to the Arabian Dance which now is much more pedestrian, Shevelle Dynott’s slave owner and four attendants going through suitably exotic swoonings make me miss the inclusion of Clara’s brother in what has always been a somewhat homoerotic episode (it also meant that we had little view of Barry Drummond, who is a young dancer in the company worth watching). The firecracker Russian Dance gave young Cesar Corrales (Mexican born, Canadian educated and of Cuban parentage) full rein to show off with turns and leaps which brought both a grin to his face and cheer from the audience.

So, a company, perhaps slightly constrained by the middle-of-the-roadness of The Nutcracker, but brimming with eager talent, and, most importantly, gives exemplars in the form of Cojocaru and Rojo of what top-class dancing actually is. Rojo has brought some talented dancers together – Swan Lake in the New Year should give them more opportunities.