Prokofiev
Romeo and Juliet, Op.64 – ballet in nine Scenes based on William Shakespeare’s play with choreography by Rudolf Nureyev

Artists of the Company, Students of English National Ballet School 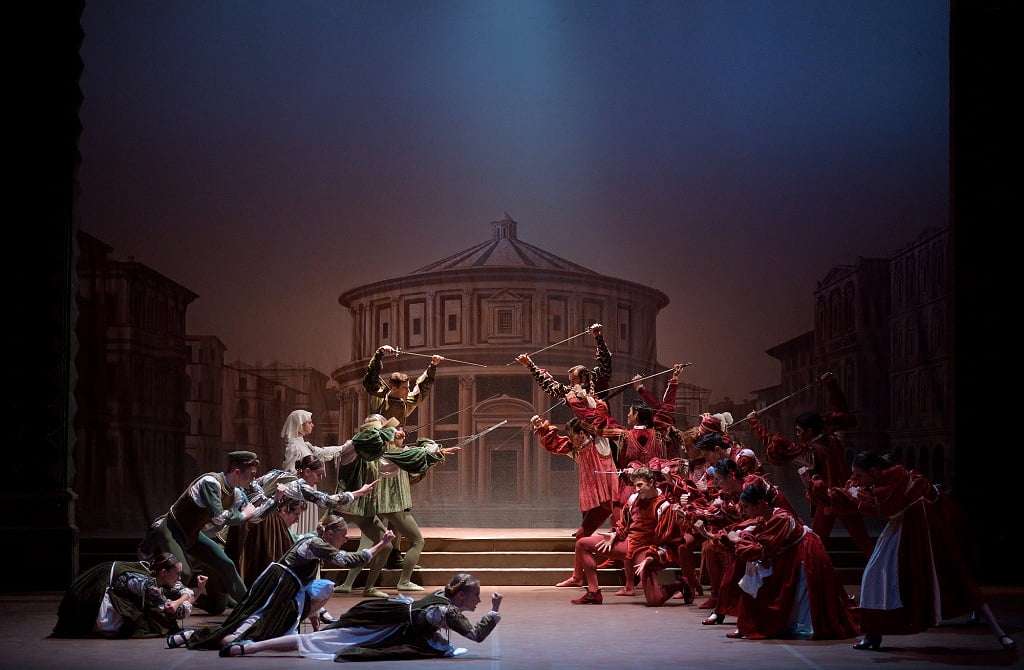 Rudolf Nureyev was not the greatest of choreographers, and his 1977 version of Romeo and Juliet is not the best dance-version of the story, but much of what he created has integrity and daring – where many follow the initial dramaturgy of the original Soviet version by Leonid Lavrovsky, he decided to return to Shakespeare, introducing episodes and details otherwise excised. English National Ballet is the re-brand of London Festival Ballet, the company for which he initially made this version, and it is with some pride that it revives it this summer, returning to its spiritual home: the Royal Festival Hall, converted not a little awkwardly into a proscenium-arched auditorium. If the stage is somewhat cramped, the make-shift orchestra pit wide and narrow (it is occupies the first five rows of the stalls) and the technical capabilities restricted, the auditorium itself makes a handsome venue for the audience, afforded excellent sight-lines. Alas, Ezio Frigerio’s magnificent designs are not seen to full extent or best effect here, certainly not in Tharon Musser’s lugubrious lighting. Costumes are sumptuous, and the stage-picture is often arresting, not least in the Capulets’ Ball which sees a back banqueting scene evoking Veronese.

Nureyev shifts much of the traditional emphasis, bringing a lighter touch to the depiction of the feuding Capulets and Montagues, here seemingly forever embroiled in mild scrapping, high spirits and light hooliganism, rather than the full-out vendetta of other versions. Within that is an unusually boyish and insouciant trio of Romeo, Mercutio and Benvolio, forever larking around – three lads on the town. Mercutio is a true joker, the sort who easily makes a crowd laugh, the sort you secretly wish would trip on his own shoe-laces; indeed his character is so brought to the fore that he often overshadows Romeo, who seems a good sort, the type of young man who will fool about but always have his homework done on time and be polite to his parents’ friends. Fernando Bufalá took the part of Mercutio with evident relish, enjoying being centre-stage and making the most of all the acting and dancing opportunities offered. Similarly, his nemesis, Tybalt, is more hot-head than psychopath, even if he dispatches Mercutio with a sneakily hurled dagger – James Streeter, valued and always-interesting stalwart of the company, danced the role with gusto. 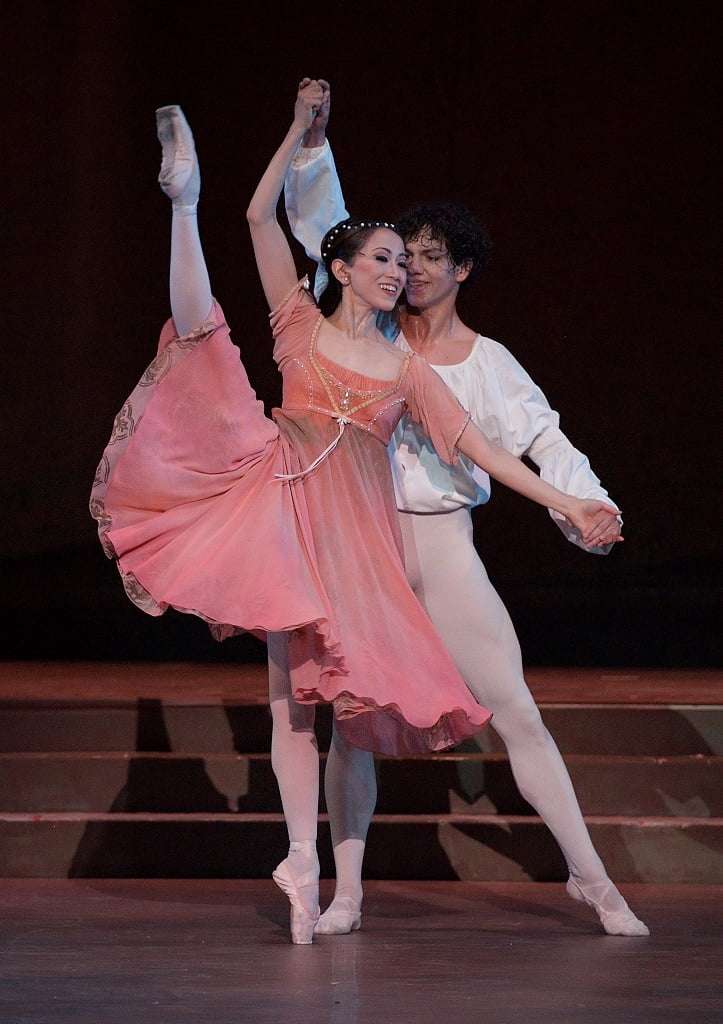 Nureyev has interesting ideas – he begins the ballet with a quartet of dice-throwers and a passing cart piled high with plague victims – this is no sanitized-ballet Verona, rather its Renaissance self in its dangerous, unpredictable glory. Throughout, there is uncommon bawdiness, grabbed crotches and breasts, slapped buttocks and vulgar gestures – even Juliet’s Nurse enjoys some heavy petting while her ward plays hide-and-seek with some other girls. Strange then that the relationship between the star-crossed lovers is essentially sexless – intimacy and attraction, yes, but no crackle of physicality, despite the at-times gymnastic choreography Nureyev gives them. The explanation is perhaps that the role of Romeo was created for himself. The ballet opens with an extended solo for Romeo, and throughout, the choreographer afforded himself ample opportunities to show off; even the ‘balcony’ pas de deux sees Romeo launch into virtuoso tricks. It could be the character trying to impress Juliet, or, more likely, Nureyev trying to impress the audience. Characterisation is thin for Romeo, no doubt because Nureyev knew that in the role, he could fill it in as he went along. Fine for Nureyev, but not particularly helpful for subsequent interpreters. The corollary is that Juliet is under-written in choreographic terms – she never really lets go in her dancing, restricted to often pedestrian movement. In the last act, when the dance must finally give way to more psychology, she takes centre-stage, and her torment at being forced to consent to marry Paris, her flight to Friar Lawrence, and her dilemma over whether to take his sleeping draught or stab herself, is well set out.

Isaac Hernández is an impressive dancer – slim, boyish-looking, with tousled hair and a natural grin, he makes for an attractive and endearing Romeo. Certainly, he sets about Nureyev’s over-complicated choreography with gusto, hurling himself into multiple turns, jumps and intricate footwork with unflinching vigour. He is just about fine as the carousing lad, having a laugh with his mates, but after falling for Juliet at the ball, he spends too much time staring into the middle distance or assuming the familiar expression which can translate as either ecstasy or anguish, joy or despair. His acting remains that of the ballet prince: generic. Nureyev doesn’t help, one suspects, but greater nuance and depth is called for.

Erina Takahashi made a delightful Juliet who, despite her technical assuredness, impressed most with her acting, the inescapable pressures on the character made clear. Nureyev introduces a telling episode absent from other versions: at Tybalt’s death, Juliet arrives in the square with her parents and is afforded a short solo of anguish, with the other characters frozen, an internal monologue in which the conflicts of her affection for the dead man and her family loyalties come up against her burgeoning love the killer. It is powerful, and powerfully conveyed by Takahashi. 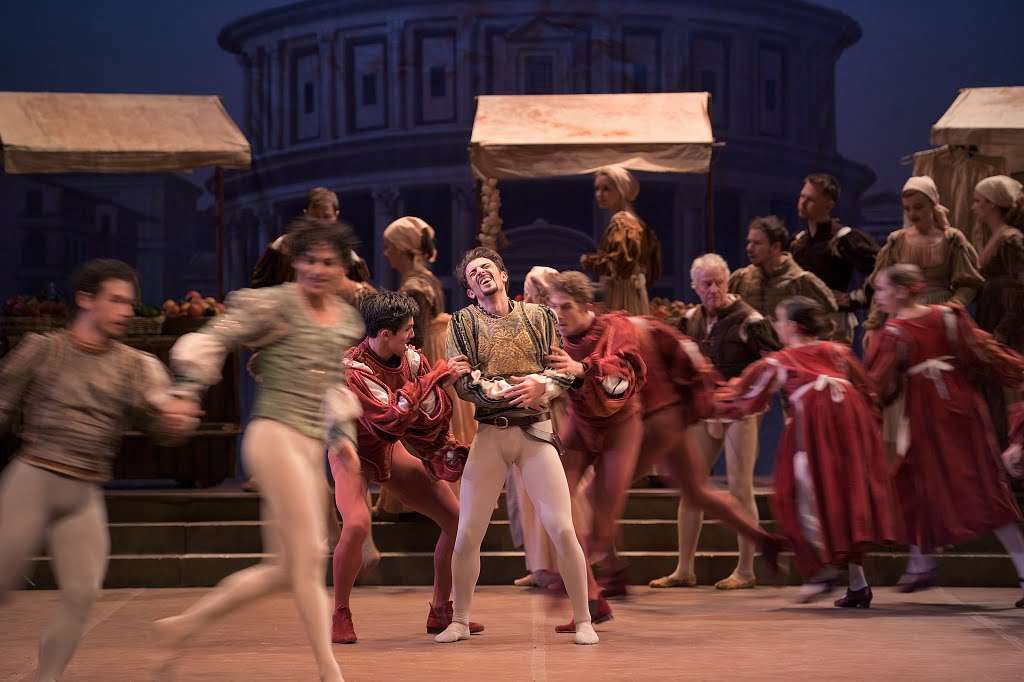 The choreographer does not always make the right decisions in his choice of episode depicted – indeed, he loses focus in the last scenes, with too many symbolic or dreamt sections, but there are many successful moments. This is very much a ‘danced’ Romeo and Juliet, with even old Friar Lawrence called upon to move about in distinctly unholy fashion. In this, Nureyev reveals his own influences, for, despite his exposure to Western ballet after his defection, his formative years and underlying aesthetic were resolutely Soviet – it was, after all, the heyday of the drambalet, the fusion of gesture and movement which avoided mime. And this Romeo and Juliet focusses on constant motion, too much, in fact. Rare is the moment of respite, of stasis and instead a never-ending flow of steps, too many steps in some cases; the short scene before the discovery of Juliet’s comatose body on the morning of her marriage to Paris here becomes a whole divertissement, with a solo for the bridegroom and protracted ensemble dancing, the whole not characterised by any particular musicality.

Nureyev plays fast-and-loose with Prokofiev’s score, making cuts, inserting repeats, re-ordering numbers. In that he also shows the usual, and sometimes healthy, Russian disregard for the sanctity of the text, rather bending and pruning the musical framework to suit his purpose. Praise to the ENB Philharmonic, who played with full engagement, even if Gavin Sutherland’s tempos erred on the slow side, perhaps necessitated by the need to give time for all those steps.