Tchaikovsky
The Sleeping Beauty, Op.66 – Ballet in a prologue and three acts to an original scenario conceived by Ivan Vsevolozhsky based on Charles Perrault’s La Belle au bois dormant

After the sugary Christmas excesses of The Nutcracker, English National Ballet moves on to tackle the more meaty fare of the ne plus ultra of Classical dance: The Sleeping Beauty, here given in Kenneth MacMillan’s production. MacMillan knew the ballet well, having danced in it in his early days with the Sadler’s Wells Ballet, and this version is broadly that still given by The Royal Ballet, with a few tweaks.

The company looked both engaged and energised at this first night, an added edge no doubt given by the fact that company director Tamara Rojo was also dancing the lead role of the Princess Aurora – nothing like performing with the boss to sharpen things up. The production looks wonderful with sumptuous costumes to Nicholas Georgiadis’s designs, beautifully made, and Peter Farmer’s evocative drop-cloths, nowhere more arresting than in the misty autumnal forest-scape for the Act Two Hunting Scene. The un-credited lighting designer must receive praise also for evocative and effective design – the moonlight of the vision scene was not, as is so often, stygian gloom, but pearl-like luminosity, allowing the dance to be seen properly. Graham Sutherland conducted a generally brisk performance of this Tchaikovsky marvel, wisely eschewing indulgence and eliciting impassioned playing from the company orchestra who give every impression of enjoying what they are doing. 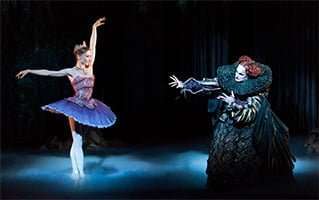 ENB is dancing well and in style, and Rojo’s decision to scatter principal dancers among the soloist roles works a treat, lifting the standard of dancing and treating Petipa’s choreography with the respect it deserves – all too often with other companies, such roles are under-cast in this blueprint for classical dance. Begoña Cao, for instance, an established principal scheduled to dance Aurora herself at later performances, brought her talent to the Fairy of the Crystal Fountain in the Prologue and Silver in Act Three, and to great effect. Nowhere was this better exemplified than by the casting of so established an artist as Daria Klimentová as the Lilac Fairy, who brought not only the required generosity of spirit but also a technical command which allowed her to execute the challenging solo in the Prologue without mishap and with style and calm.

Shiori Kose and Yonah Acosta in The Bluebird and Princess Florine pas de deux impressed hugely, she pin-point accurate with a pleasing use of rubato in her solo, he appropriately soaring in his jumps and strong in the fiendish footwork. Laurretta Summerscales was a grand Fairy of the Woodland Glade whose expansive movement quality allowed her to carve the choreography to great effect. I am in two minds about James Streeter’s Elizabeth I Carabosse: his mime is clear and he exudes the requisite malevolence, but at times his theatrical twitchiness was more Hilda Baker than Bette Davis. 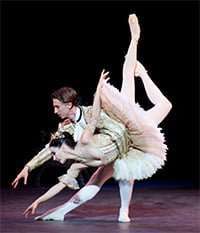 Vadim Muntagirov continues to develop on every occasion that he appears. He has both natural grace and reticence, and a long-limbed silhouette and a nobility of carriage which place him the exclusive club of danseurs nobles. His technical strength is more than apparent, nowhere more so than in his Act Three solo, which displayed his considerable talent to great effect, every challenge elegantly met. He clearly relishes all, and his smile is unforced; he could, if truth be told, try to look a little less jolly in the Hunting Scene where he is supposed to portray an unfulfilled and melancholy personality.

Tamara Rojo approaches Aurora with all the skill and technique of a consultant surgeon, expertly opening-up the choreography for her students to observe and learn from, but now too clinical. Not for her the joy of the radiant princess on the occasion of her sixteenth birthday – narry a smile, but in its place a steely determination to nail every technical challenge, for every balance to be held as long as possible, for her dancing to be the template. In that she succeeds, so that her Act One solo contains multiple pirouettes where lesser beings achieve but the two, the balances of the Rose Adagio prolonged by what seems to be sheer force of will. It is mightily impressive but does not move. Aurora has precious little character, so that which remains to a ballerina is to convey an inner warmth and a generosity of spirit, and the challenge of somehow making the transformation from the Act One sixteen year-old to the grand princess in Act Three. Rojo seems not to concern herself with such matters, but instead exults in the challenges and clearly demonstrates her command of technique. It is a cool, almost cold interpretation, and I would gladly swap fewer turns and balances for greater humanity.