In The Middle, Somewhat Elevated 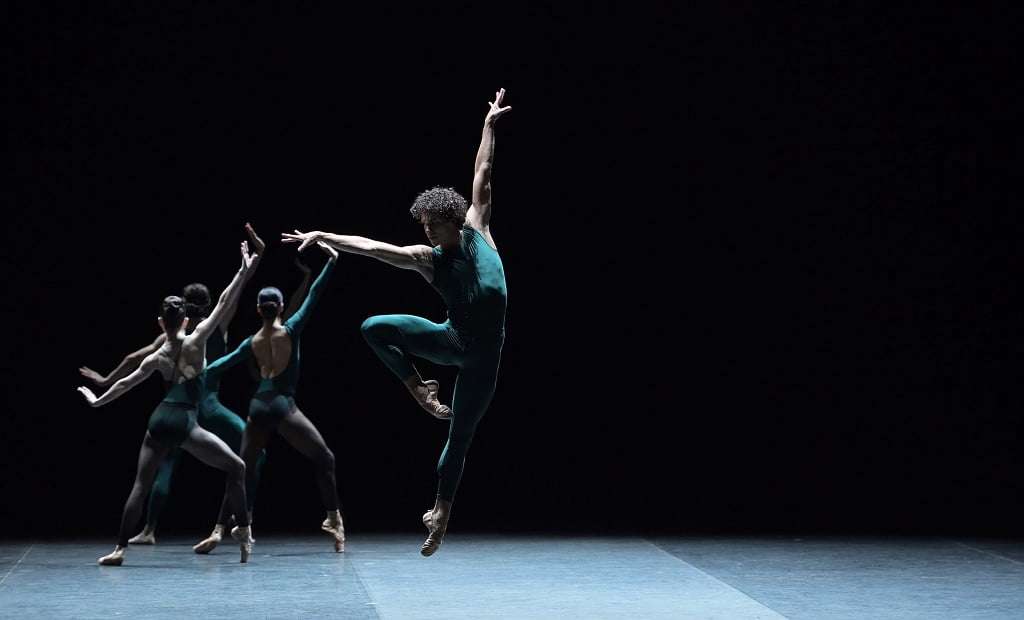 This is a meaty triple bill indeed, a trio of notable dance works from the 1970s and 80s, put together by ENB Director Tamara Rojo not only to expand her company’s repertoire and bring these works to the company’s audience but, perhaps more importantly, to stretch and fulfil her dancers who have to work hard to perform in three very differing styles. As an evening of dance, it works very well indeed, a judicious juxtaposition of contrasting ballets, each intense and highly focussed, coming together in a whole amounting to more than just the sum of its parts.

William Forsythe’s In The Middle, Somewhat Elevated (created in 1987 for Paris Opéra Ballet) burst onto The Royal Ballet’s stage in 1992, shaking the stucco and gilt of Covent Garden with Thom Willem’s insistent pots-and-pans score and dancing of explosive energy. At its centre Sylvie Guillem, fresh from her defection from Paris, and Laurent Hilaire, another French guest, powering their way through the extremes of Forsythe’s choreography, and followed by their British colleagues (Dracey Bussell, Deborah Bull et al.) in a state if exhilaration. If ENB’s dancers do not bring quite that sense of iconoclasm to their performances, it is because they do not possess a Guillem, whose acrobat’s extensions and bends were something entirely new to London, nor does the work itself pack quite the same punch because Forsythe is now firmly mainstream, and a work such as In The Middle, seen as an extension of, rather than a break from, classical dance. Add to that the fact that the company’s dancers, for all their exertions, possess, for the most part, a soft-grained quality in their dancing, at odds with the shiny, jagged, show-off nature of Forsythe in this work. They are also clearly nice people who do not naturally exude the ‘in-your-face’ attitude which typified Guillem with a lot to prove. Not that ENB dance this work badly – they hurl themselves into its spatchcocked classicism with evident gusto, even if the they do not yet ‘own’ it. 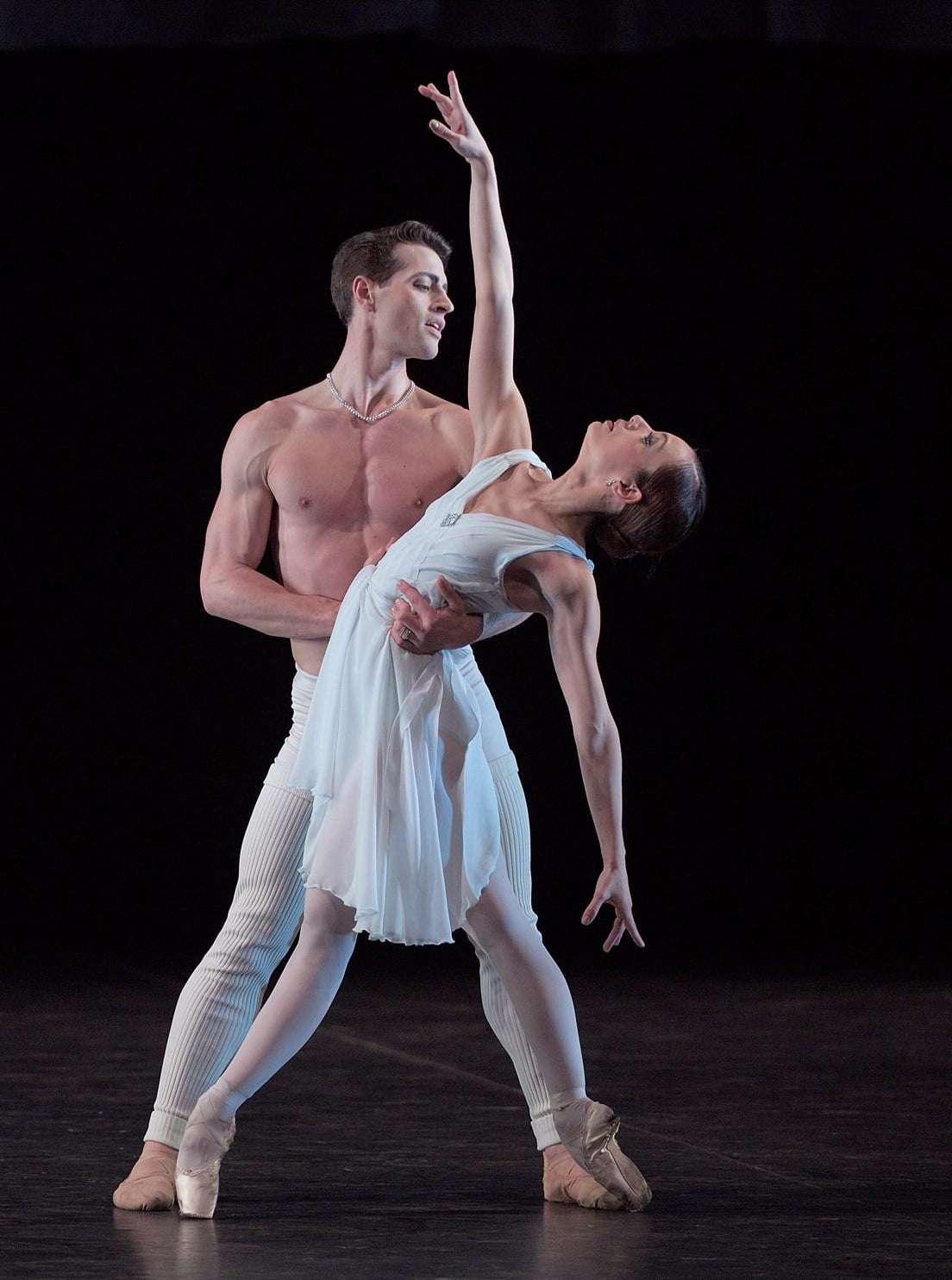 Isaac Hernández is a well-proportioned company principal, fearless in all elements of his role, but lacking in the bravura quality that makes the steps sing; Cesar Corrales, by contrast, shows how it can be done, his natural farouche flamboyance leading to explosive movement shot through with sassy arrogance – perfect for this ballet.

It was clever programming to schedule Hans van Manen’s Apollonian Adagio Hammerklavier after such a loud opener. Created by the Dutch master in 1973, it sets three plainly dressed couples in a spare interior, characterised by a a rippling curtain set high above them. It is a work that emerges directly from its music, the slow movement of Beethoven’s late masterpiece sonata, played with intensity by Olga Khoziainova. Van Manen created a ‘slow’ ballet, characterised by precise pose and an open, questing quality. The three couples interact with each other, but the atmosphere, while intriguing, is impenetrable – we watch as the six dancers go about their intensely beautiful business. The three female principals – Oliveira, Summerscales and Rojo herself – were very fine indeed, bringing a notable serenity to their movement and Rojo’s duet with Hernández was a highlight, a deeply concentrated pas de deux, with every gesture and look carefully weighed. 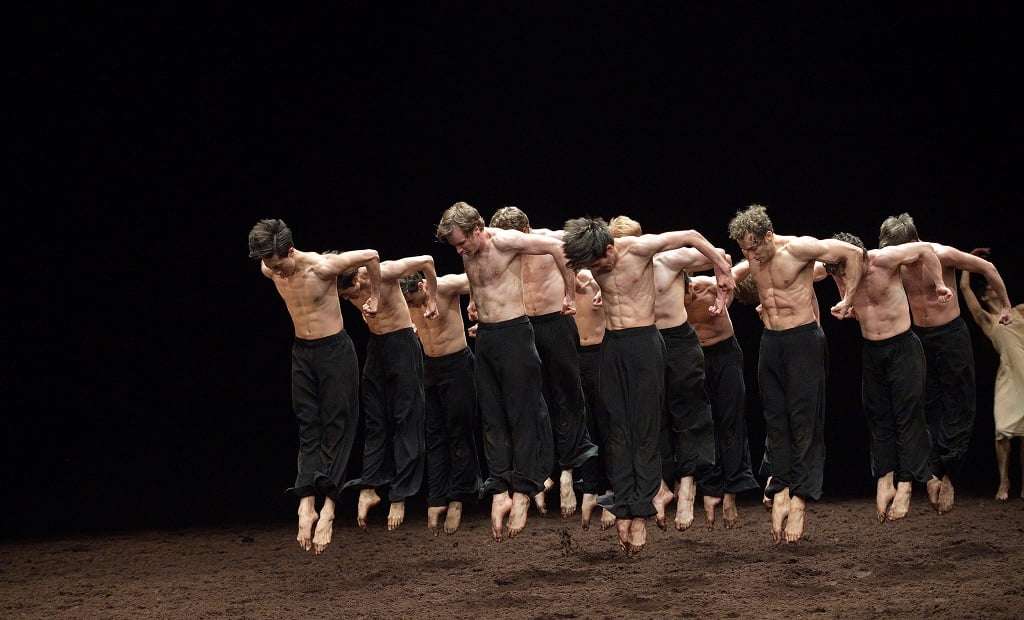 To secure Pina Bausch’s Le Sacre du Printemps is something of a coup for ENB – the late choreographer’s Wuppertal-based ensemble has only recently launched a policy of awarding the rights of performance on a wider scale. Bausch’s version to Stravinsky’s still-startling score, here played with forceful gusto by the company orchestra, stands as one of the very best, a raw, brutal interpretation for 28 dancers barefoot on a huge stage square of Wuppertal earth, the delivery and raking of which with the curtain raised has become a performance in itself. This is unknown territory for ENB’s resolutely balletic dancers who have to find a weightiness instead of elevation. and a far-from-rarified sensibility for the terrors of their rituals. My, how they work hard at it, and are to be applauded for a performance of genuine intensity. 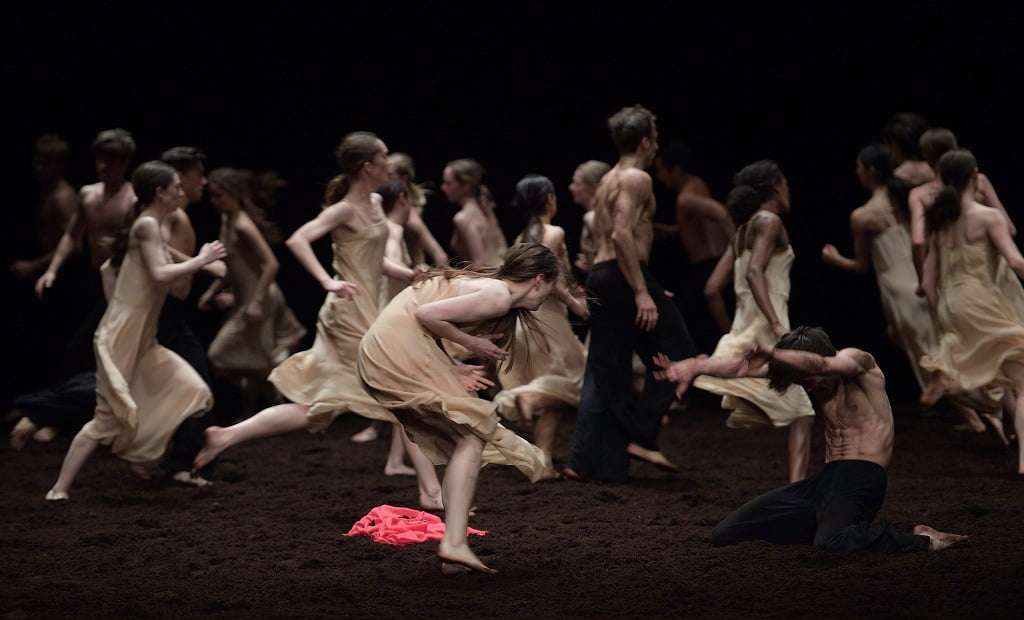 The women achieved great focus, as they shuddered and shook, ran with mounting desperation and huddled in a frightened mass – they successfully shod their swan and fairy focus to bring out vulnerable womanhood. The men were a tad more problematic – to be a ballet dancer, despite needing exceptional strength, a man must also unlearn so many ‘male’ attributes to focus on softness, grace and poise. These are harder to mask, and so the men in Sacre lacked a degree of force and punch in their movements, despite their evident efforts. But these are minor quibbles – ENB gave a superb performance of this exceptional work, no-one less so than Crystal Costa as the The Chosen One, who truly blazed in her Dance of Death.