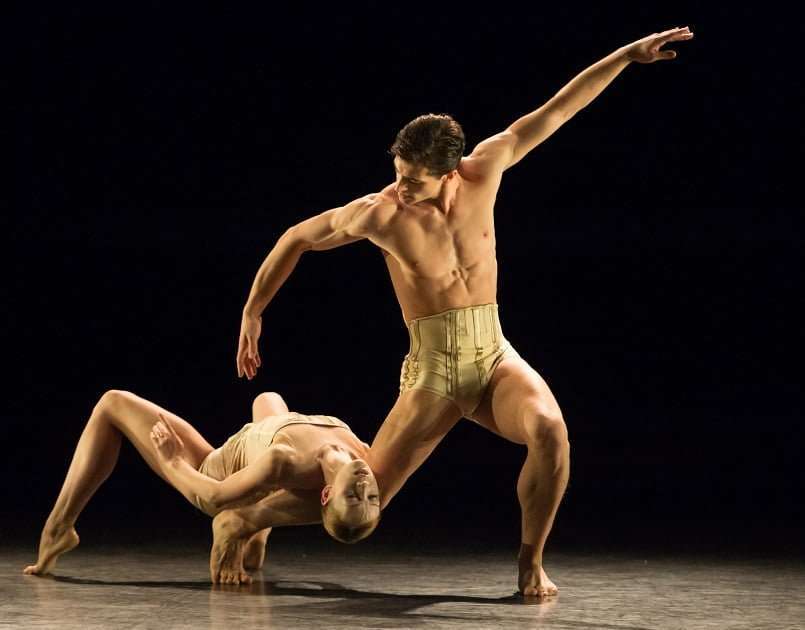 This programme, marking the beginning of the company’s Associate Artist status at Sadler’s Wells, is something of a watershed for English National Ballet. It is, perhaps, this country’s most traditional ballet ensemble, providing a seemingly endless diet of narrative classics from the nineteenth and twentieth centuries for its audiences on tour. It was not always thus, but financial strictures have meant that the rich and varied repertoire built-up from the 1950s to the 1980s has been consigned essentially to the history books. It is a brave and necessary step on the part of Director Tamara Rojo to programme an evening such as this – brave because box-office is far from assured, and necessary because her dancers need variety and the challenge of the new. Not that any of these three works is new – they are, as the programme’s title states, sans capitals, ‘modern classics’, works from living choreographers who have established themselves at the forefront of dance creation, even if all three are now of pensionable age. 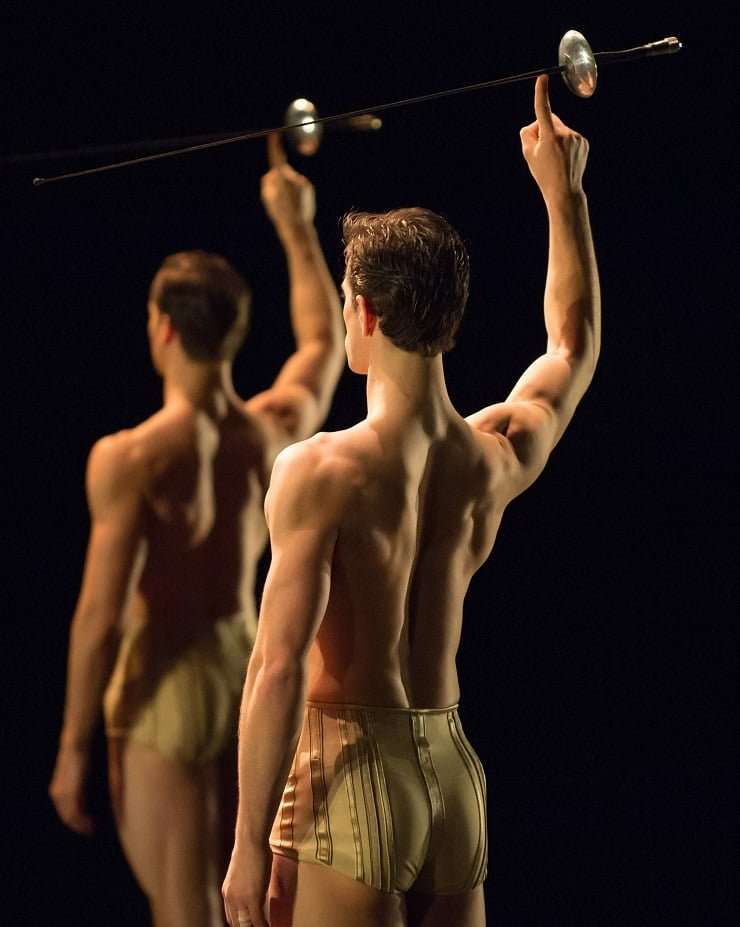 All three works were shot through with a varying degree of stylistic uncertainty as the dancers set about the choreography with both nervousness and a care to get it right. That is not in itself a criticism, given the newness of it all for them; indeed the vast majority of this talented group of dancers will only have seen these ballets on the internet, if at all. The unifying thread in this programme was the presence of John Cranko and his Stuttgart Ballet, under whose aegis all three choreographers, Jiří Kylián, John Neumeier and William Forsythe took their first steps in creating dance. It would have been both a coup and an intelligent gesture to acquire and programme a work by Cranko alongside those of his protegés.

Kylián’s Petite Mort is a good opener, nineteen minutes of undemanding but intriguing movement to two beguiling excerpts of Mozart. It contains props to pique interest – to open with bare chested men holding and manipulating fencing épées, to silence immediately grabs the attention – and Kylián fluently, if sometimes a little obviously follows the ebbs and flows of the glorious music. It is the movement palette that we know and recognise from his particular brand of modern ballet, with a focus on the shaping of arms and legs into angular forms, the arching and elongation of the back and duo work in which counterbalance is the key. ENB’s dancers work hard, even if they do not yet hear the music as one or move in perfect unison. Rojo herself joined the ensemble, bringing her own unmistakable stage presence and artistry to the final pas de deux with a confident Max Westwell. 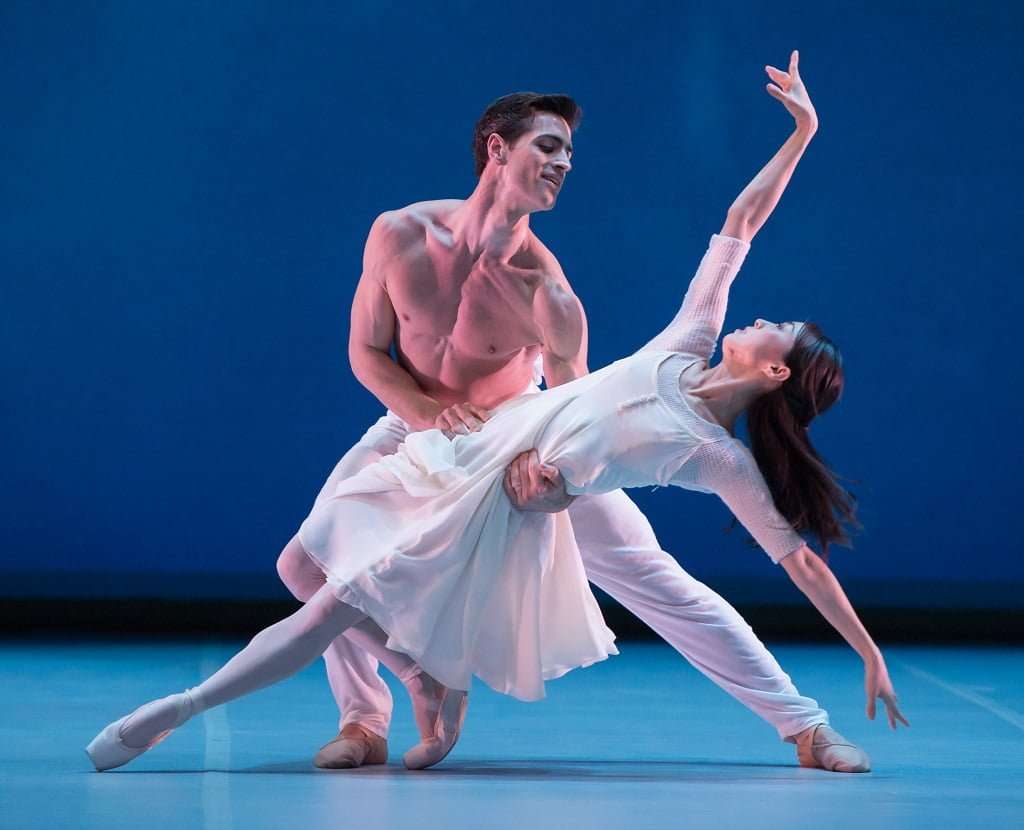 I am baffled why, of all the one hundred-plus works that John Neumeier has created, the company would acquire the dull Spring and Fall, set to frankly soporific Dvořák. The women are in those floaty, slightly utility frocks so beloved of ballet designers, the men in high-waisted white bottoms, the backcloth, a colourwash effect reminiscent of 1980s new-builds. It all meanders along pleasantly enough, Neumeier creating a community feel reminiscent of Jerome Robbins in Dances at a Gathering, albeit with less precision. The dancing is often jokey or purely abstract, although a more agitated musical sequence in this five-section work leads to more interest with couples splitting off and engaging in more combative and confrontational movement. Strangely, it is in this somewhat soft-focus work that the company seems least comfortable, ensemble ragged and showing a degree of stylistic uncertainly. A shining exception was Alina Cojocaru who is a frequent guest in Neumeier’s Hamburg ballet and is well versed in his choreography. She showed what can be done with his choreography – she brings light and shade, nuance and subtlety, spontaneity and a centred quality to the steps which illuminate them and raise them from the pedestrian. She is an impressive artist, intensely focussed but retaining a natural quality which gives her movements sense and form. 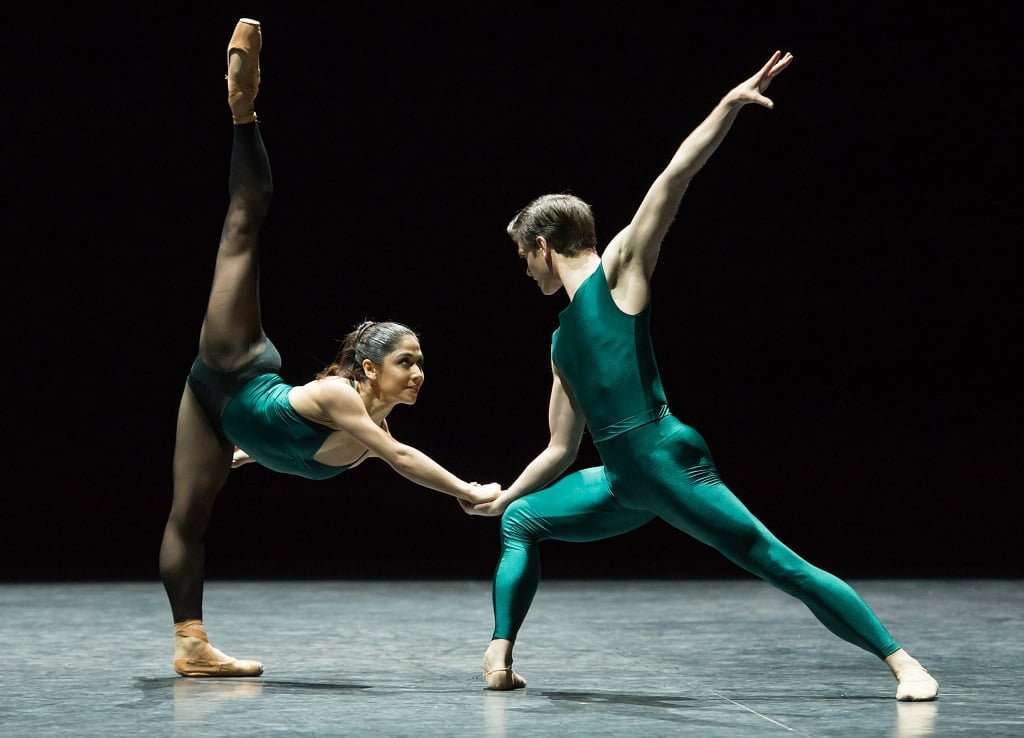 It is strange how something so shocking as William Forsythe’s In the Middle, Somewhat Elevated should now seem familiar and strangely comforting. In 1985 when it premiered at the Paris Opéra, it blew away countless cobwebs with its exploration and extension of the Classical Dance vocabulary, taking the dancers’ bodies and stretching them into what were then seemingly impossible shapes. It blows away several cobwebs again at ENB with dancers unused to such extremes working very hard to achieve them. That it lacked the punch of the original and even the first Royal Ballet cast is unsurprising – ENB’s performers are used to a diet of classics, so the in-your-face attitude and general sassiness is something completely alien to them, and it was interesting to see the doughty cast improve even as the ballet progressed.

Cojocaru impressed again, even if the last ounce of doubt that this type of movement is not really her métier was never dispelled; Sylvie Guillem used to bring French hauteur and feminist punch to her central role whereas Cojocaru has a more delicate artistic persona. Alejandro Virelles is a new Principal with the company, and possesses a fine physique – however, his lack of stage presence in both the Neumeier and the Forsythe shows that he has much to work on. Thom Willems crash-bang score has been brought down several notches in terms of volume, which spared the ear-drums, but underlined a certain politeness about the whole undertaking.

This programme is a very brave move by the company and one which will pay even greater dividends as performances progress and the dancers settle into these new styles; it is an exciting time at ENB which, it must be noted, has secured a week-long residency at the hallowed Opéra Garnier in Paris next season as a visiting company.