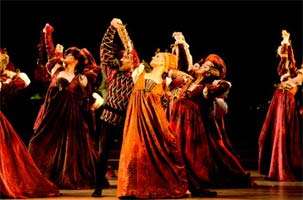 It is something of a relief not to have to watch Kenneth MacMillan’s Romeo and Juliet again. Not that it is bad; in fact, it is rather good. But it is so familiar, so often revived that its many pleasures are often forgotten when the heart sinks at the thought of all those street whores and prancing that fill the crowd scenes. MacMillan’s forte is in the scenes of intimacy, the glowing pas de deux between the star-crossed lovers, the increasing focus of his dramaturgy as the tale moves inexorably to its tragic end.

Rudolf Nureyev, in his 1977 version for the then-London Festival Ballet, and then sold around the world, largely, one suspects, on his name, goes for a distinctly more scatter-gun approach. At times he is more literal than MacMillan in his inclusion of details in Shakespeare’s narrative. So we get the interception of Friar Laurence’s letter to Romeo explaining the stratagem of the poison – here a nasty case of ecclesiastical mugging. At other times he is freer with the story, such as the inclusion of four dice-throwing incubi, who represent the arbitrary plays of Fortune on the fates of mankind, and a distinctly curious-looking personification of Death sporting a whitened face, underpants and a cloak, like some slightly desperate hopeful at one of our more dodgy country lay-bys. 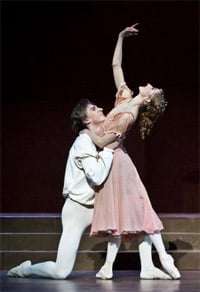 What I like about this Romeo and Juliet is the fact that it is so very different from MacMillan’s, despite the fact that Nureyev danced the latter’s world première, and that that version went on to dominate the schedules. No, Nureyev has an interpretation all his own, nowhere more refreshing than in the crowd scenes where the rough and tumble, the bawdiness, the dirty street brawling are all brought to life – all below-the-belt punches and bras d’honneur, buttock waggling and crotch-grabbing. In fact these are the version’s strongest scenes, rather than the human tragedy of the lovers – Nureyev relishes the challenge of Mercutio’s monumentally stretched-out death by making no-one believe his agonies until his body lies inert, an excellent piece of crowd management. In fact, Mercutio, as danced by Juan Rodríguez made for almost the most interesting character – Nureyev gives him quirky, genuinely comic choreography, the eternal joker of the pack, an insouciant, flippant, naughty boy-man who laughs in everyone’s face and snogs any girl, including Juliet’s Nurse. Rodríguez has bags of character, catches the eye with his bubbling personality and makes much of what can be an irritating personage. 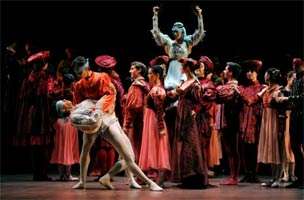 This, I think is the key to Nureyev’s version – it requires, as Frédéric John, the original Tybalt and one of this revival’s stagers, says, the dancers to be actors. And there’s the rub (to mix up my Shakespeare quotations), because ENB dancers do not have that much experience in truly narrative works. Fabian Reimair stalks the stage convincingly as Tybalt, a hot head if ever there was one and engaging with Nureyev’s at times frankly bizarre choreography. The choreography is one of the big problems with this version: Nureyev can almost never resist the temptation to “over-choreograph”, to lard every phrase with a dizzying number of steps, to cut across the music to pack every bar with complicated movement. He resolutely refuses to go down the path of simplicity, to trust in the power of pure movement and to exploit the intensity of stillness. Pas de deux are thus a series of technical challenges (in part to show off Nureyev’s own mastery of technique – he was the first Romeo) and contain some frankly ugly movements, all instituted in the name of expression. 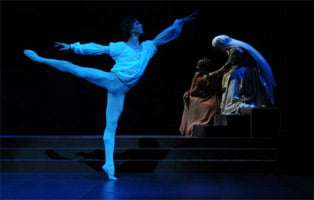 Thus Daria Klimentová and Vadim Muntagirov as Juliet and her Romeo constantly have to battle with clunky choreography which rarely takes flight in pas de deux, and, is at worst in the third act bedroom duet, becoming a series of bizarre combinations which never meld into a coherent whole. Klimentová’s Juliet is, despite this, a success, an intensely felt, acted and danced interpretation, keen to the details of Juliet’s character and fully engaged with every demand both technically and dramatically. 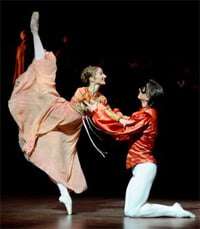 Muntagirov is more of a problem – and it seems churlish to say anything less than positive about the company’s 20-year-old wunderkind, whose line is of the purest and whose technique is already impressive – but I felt that in a role made by Nureyev for himself, I was seeing a boy doing man’s work. Nureyev only had to enter the stage for all eyes to be on him, and, I suspect, he omitted to infuse his choreography for Romeo with any drama because he knew he himself would supply that in spades on the night. The problem is when a fine dancer but undeveloped actor like Muntagirov takes the role he finds he has nothing to ‘work’ with. Muntagirov has an ethereal quality in any case ( he would make a superb dreamy poet in Les Sylphides for example) and here he seemed separated from everyone else by an invisible wall, as if he were dancing on his own in some ideal, platonic version of everyone else’s reality. I didn’t believe he was friends with Mercutio, Benvolio and the lads, I didn’t believe in his remorse, anger or, if truth be told, his love for Juliet. Muntagirov doesn’t do knock-about in the street and doesn’t do sex with Juliet in private – for an earthy, dirty version like Nureyev’s, that is a serious failing. He was also stretched by some of the choreography at times, but, as ever, there was so much to admire in his stunning line (he has the long legs Nureyev always wished he had had) and in the purity of his dancing. But he is not yet a Romeo.

Ezio Frigerio’s sets and costumes are superb, richly evocative of renaissance Verona – I especially liked Nureyev’s inspired use of the set in the ball scene where all the guests are placed frieze-like in banquet at the back of the stage as Romeo and Juliet dance in the foreground, a scene reminiscent of those wondrous crowded tableaux of Veronese. I was less taken with Tharon Musser’s distinctly variable lighting, which at times left some of the principals in penumbra.

Gavin Sutherland conducted a spirited performance of this familiar score which, in places, witnesses repeats so that Nureyev can get all his ideas on the stage. The orchestra, which improves every time I hear it, engaged fully with the music, producing some juicy Soviet-style brass, icy strings before the tomb scene and idiomatic woodwind.

Nureyev’s Romeo and Juliet is certainly worth seeing, for its sheer differentness, and there are some interesting and striking ideas. In sum though, where MacMillan’s gets better and better as the drama focuses on the lovers, Nureyev’s gets worse, with over-padding, stodgy narrative and fussy choreography. ENB have, notionally at least, Frederick Ashton’s version originally done for the Royal Danish Ballet in 1955 and successfully revived by London Festival Ballet (now ENB) in 1989 – wouldn’t it be nice to see that again? All praise though to Wayne Eagling, the company’s present director, for overseeing such a successful revival of this admittedly flawed work and scheduling some truly exciting programming over coming months – don’t miss Serge Lifar’s Suite en blanc in a mixed bill this spring and a triple bill of Roland Petit ballets in the summer – these are works very rarely seen on these shores, and Eagling and his likeable company are to be applauded for and supported in bringing them to us.