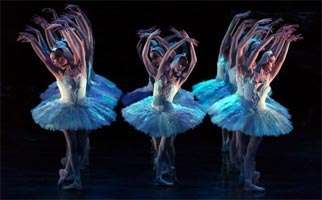 Riding the “Black Swan” wave, Classical Ballet is enjoying immense popularity at present – both the London Coliseum and Covent Garden sold out on the same night for the same ballet: Swan Lake; that is over 4,500 people, proving, I submit, that the future of the art form is not the current pursuit for ever more extreme crotch-splitting, twitching, shaking anti-ballets, but performances of Classical dance with integrity and style.

English National Ballet dives in with Derek Deane’s largely traditional production of this classic of classics and, in doing so, the company beats hands down The Royal Ballet’s somewhat tired and over-fussy Fabergé inspired muddle. In fact, in Peter Farmer’s wholly traditionally medieval and therefore deeply satisfying stage pictures, the ENB looks rather as The Royal Ballet used to, focussing on elements of style and presentation now sidelined at Covent Garden. It helps that the roster of the company’s artistic staff is essentially a cast list from then in times past: Wayne Eagling as Director, supported by Anthony Dowson, Rosalyn Whitten (I saw them dance the Bluebird pas de deux together), the invaluable Maina Gielgud as Guest Répétiteur, and even Laura Connor as a guest teacher. Deane, of course, was also a Royal Ballet principal, and his production draws heavily from his own dancing experience, so no surprises there, and all the better for it; I thank him especially for the inclusion of Ashton’s delicious pas de quatre, inexplicably jettisoned by the RB. 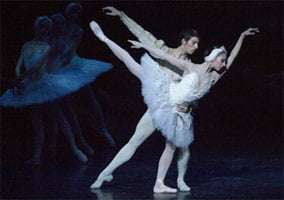 The company is on a high at present, with valuable exposure in the most excellent BBC Four television documentary “The Agony and the Ecstasy”, and an enviable artistic policy – we have recently had a successful new The Nutcracker, a revival of Nureyev’s Romeo and Juliet, the triumphant return of Lifar’s miraculous Suite en blanc and have a Roland Petit triple bill to look forward to. But a classical ballet company must, first and foremost, dance the classics well, so it is highly informative to catch a performance other than the press night in order to gauge the strength of a company by its second or third cast. 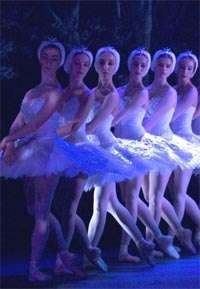 With a few small exceptions, such an experiment shows that ENB is in fine fettle: this was a superb performance. Erina Takahashi is excellent in the dual role of Odette/Odile, carefully etching out the former’s lyrical movements, a deeply mournful Swan Queen, fearful of falling in love with her prince, persuaded of the futility of doing so. As Odile, she flashes with malevolence and makes her dancing a process of seduction and not just flashy brilliance – the Black Swan is there, after all, to gull our hero, to trick him into betraying his oath to Odette. Takahashi is strong technician, sure of balance, unafraid of taking risks to underline her interpretation; she tells the story above all, which is the heart of Deane’s intensely dramatic production. Her partner, Esteban Berlanga, is solicitous in partnered work and presents Takahashi with aplomb. He presents a pleasing silhouette with long limbs and slim waist, and while he lacks the final ounce of virtuosity to make his black act solo a show-stopper, he demonstrates great affinity with adagio dancing, making much of his long Act I solo and displaying admirable expressiveness in his arms and back. He and Takahashi are well matched and burned with intensity in Act IV as they resolve to die to together.

Elsewhere there was much to enjoy, not least because of Gavin Sutherland’s brisk tempi which lift the dances and the orchestra’s engaged and fruity playing of Tchaikovsky’s familiar score (all praise to the brass section, and how often can one say that to that particular part of a ballet orchestra?). The Ashton Pas de Quatre was extremely well danced by the distaff side, Crystal Costa in particular impressing greatly with her witty musicality and melting upper body; the two men too different in schooling and messy in finish to do full justice to Ashton’s bidding wholly satisfactorily. The swan corps de ballet was mightily impressive both in uniformity of movement and style; a well drilled ensemble who contributed much to the overall quality of this evening – an especial mention to the four young dancers as the cygnets who were fine in their famous dance – totally synchronised. The Act III national dances went off without a hitch, but lacked the tang of authenticity – every so often the men seemed like corps de ballet boys in hats and stick-on moustaches. It is always a joy to see Ashton’s Neapolitan Dance (there is no better version) but despite much grinning and effort from the lead couple it remained resolutely flat, partly because it was performed in a style as un-Ashtonian as could be imagined – a seriously long session in the studio should sort that out.With Arts Council cuts looming, ENB deserves the support of its public, not blindly to support a status quo, but to ensure that this vibrant and artistically interesting ensemble continue to so their good work; the Roland Petit triple bill in July of L’Arlésienne, Le Jeune Homme et la Mort and Carmen promises to be superb.