Tchaikovsky
The Nutcracker, Op.71 – Ballet in two acts based on an original scenario by Marius Petipa after E. T. A. Hoffmann’s Nussknacker und Mausekönig 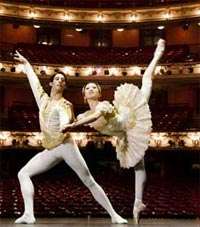 Christmas for ENB means The Nutcracker – since its inception as a company under its co-founder, the great Dame Alicia Markova, the 100th anniversary of whose birth is marked this year, the ballet has been the one mainstay of the repertoire. Now, Wayne Eagling, the company’s re-vitalising and successful director, has presented his own new production (the company’s 10th), and, for the most part, it is a success, banishing finally the choreographically lightweight yet visually heavy previous version.

It is largely a traditional presentation, conjuring up snow and sweets, mice and magic – Peter Farmer, whose talent for stage design is somewhat taken for granted, such has been his success over the decades, has created a versatile production (touring is the company’s bread and butter), setting the work in the 1890s and ensuring costuming is all frock coats and bustles. However, his presentation of the second act, here The Puppet Theatre rather than the traditional Kingdom of Sweets, is less visually satisfying compared with his true coup de theatre of the first scene outside the house where the party is to take place – we have façade, snow, trees, all glistening white and skaters and sledges – it is visually ravishing.

If Eagling has one fault, it is that he is prolix – his libretto is unnecessarily complicated with dream sequences, the Nutcracker (a somewhat limp Junor Sousa) metamorphosing into Drosselmeyer’s nephew (Muntagirov) and back again, Clara being danced by both a child and an adult, and her sister reappearing in the divertissements as a butterfly. This tendency away from simplicity is seen also in his choreography, which, à la Nureyev, is packed with more and more tricks. It is all too much at times, not least in Clara’s grand pas de deux with the Nephew (known to us all as the Sugar Plum Fairy and her cavalier). Elements of Ivanov’s simple yet beautiful choreography poke through at times, like snowdrops through a blanket of snow – but Eagling adds more and more, steps fussy, hurried, partnering over-complicated – the elegance and the stylishness which exist in the purest versions of this pas de deux, matching impeccably Tchaikovsky’s swooningly melancholy melody in the opening section, all lost. 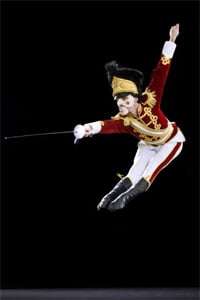 That said, there is a fine Waltz of the Flowers and a satisfying Waltz of the Snowflakes which see the corps de ballet used properly – patterns pleasing and giving plenty of opportunity for the dancers actually to dance. The Act I party is a low-key affair, distinctly bourgeois, but, and if there has to be a ballet which involves children then Nutcracker is it, the children of Tring Park for the Performing Arts and The Royal Ballet School are given ample opportunity to perform. I particularly liked Kaine Ward as Clara’s naughty younger brother Freddie, he too a pupil at Tring.

ENB continues to impress with the talent of its dancers – it is a bright, enthusiastic company brimming with the joy of performing. The Spanish dance was diminutive in height, but all three dancers delivered their fire-cracker choreography with virtuosic dash. James Streeter as the Mouse King has an amplified role, and he hammed it all up very nicely, his costume a triumph, not least in the mouse’s totenkopf which he shared with all his murine hordes – in fact, I suspect he is rather frightening for the younger members of the audience, and nothing bad in that. 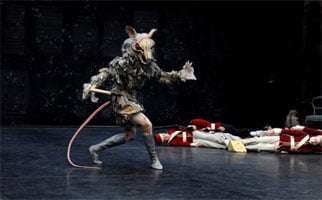 Eagling goes for a Chinese dance which more than nods to The House of Flying Daggers – not twee or sugary in the least, which is a blessing. The Arabian Dance is a whole narrative ballet in itself: a slave master, his harem of concubines and a sorely tested European male captive who is manhandled and abused in a distinctly homoerotic fashion – quite perplexing. I liked least of all a messy pas de quatre to the Mirlitons’ music, a clumsy link to Act I in which Clara’s sister Louise plays a butterfly pursued by her three suitors from the party – I always think Jerome Robbins cornered the market in “dancers as butterflies” with his The Concert and would advise a re-think. Begoña Cao and Sarah McIlroy are both principal dancers, so it was luxury casting indeed to have them as lead snowflakes and flowers – casting form strength, however, leads to good performances, and both sailed through their steps with aplomb; James Forbat impressed as McIlroy’s partner in the Waltz of the Flowers.

But all eyes are on the lead couple, even if their relationship is somewhat blurred in Eagling’s over-fussy narrative. Daria Klimentová and Vadim Mutagirov are dancing a lot together, and it easy to see why: she brings experience and he youthful verve (there is nearly a 20 year age gap), but the combination has re-invigorated her dancing, making her more responsive to music and partner alike. He benefits from her knowledge of the art form, and has visibly grown up in the very short time he has been with the company (he joined in 2009 from The Royal Ballet School).

Muntagirov is “the real thing”, a born danseur noble who grows in confidence at each performance – he has the long-limbed silhouette of a thoroughbred, the demeanour of a prince. Muntagirov is, perhaps, the most exciting male dancer this company has, and runs Sergey Polunin at The Royal Ballet close – he is not yet as physically developed or as confident as the Ukrainian, but there is no mistaking the star potential of this young man. He delivers the choreography with élan, an innate stylist, his jumps high and lingering, feet tight in entrechat, body fully coordinated in the flow of movement.

Klimentová brings new softness to her impressive technique, even if both were hurried somewhat by Eagling’s ever-increasing demands – there seems simply not enough time or music to fit everything in and at the end of the Grand pas de deux, the couple finished a bar behind the orchestra, Muntagirov emitting grunt of frustration. I would dearly love to see them dance an un-ornamented version of this sublime duet – perhaps a revival of Markova’s version somewhere, somehow, would reveal much more about both of them.

In all, then, a welcome new version of The Nutcracker; not perfect, but astute in its combination of the traditional and the innovative. It is one the company can confidently perform for many years to come. Let us hope that the few jarring notes are excised over time – their removal would strengthen further an already impressive production.

The ENB orchestra gave a nuanced and idiomatic performance under Nigel Gaynor’s experienced baton – when properly marshalled, this ensemble is capable of good playing – the sublime score deserves and demands superlative execution.