Skip to content
LnRiLWNvbnRhaW5lcltkYXRhLXRvb2xzZXQtYmxvY2tzLWNvbnRhaW5lcj0iNmIzNDMzNmNmZTc3NWZiNGJlMTVjMmIwMzU3NWM1MjYiXSB7IHBhZGRpbmc6IDI1cHg7Ym94LXNoYWRvdzogNXB4IDVweCAxMHB4IDAgcmdiYSggMCwgMCwgMCwgMC41ICk7Ym9yZGVyOiAycHggZG90dGVkIHJnYmEoIDEwOSwgMTA4LCAxMDgsIDEgKTsgfSAudGItZmllbGRbZGF0YS10b29sc2V0LWJsb2Nrcy1maWVsZD0iODM3Y2ExZjc0MGRjZDdkOTdlMzQzOWMyYjIwMWZmZTMiXSB7IGJhY2tncm91bmQtY29sb3I6IHJnYmEoIDIzOCwgMjM4LCAyMzgsIDEgKTtwYWRkaW5nLXRvcDogMTBweDtwYWRkaW5nLWJvdHRvbTogMTBweDtwYWRkaW5nLWxlZnQ6IDEwcHg7IH0g
LnRiLWNvbnRhaW5lcltkYXRhLXRvb2xzZXQtYmxvY2tzLWNvbnRhaW5lcj0iNmIzNDMzNmNmZTc3NWZiNGJlMTVjMmIwMzU3NWM1MjYiXSB7IHBhZGRpbmc6IDI1cHg7Ym94LXNoYWRvdzogNXB4IDVweCAxMHB4IDAgcmdiYSggMCwgMCwgMCwgMC41ICk7Ym9yZGVyOiAycHggZG90dGVkIHJnYmEoIDEwOSwgMTA4LCAxMDgsIDEgKTsgfSAudGItZmllbGRbZGF0YS10b29sc2V0LWJsb2Nrcy1maWVsZD0iODM3Y2ExZjc0MGRjZDdkOTdlMzQzOWMyYjIwMWZmZTMiXSB7IGJhY2tncm91bmQtY29sb3I6IHJnYmEoIDIzOCwgMjM4LCAyMzgsIDEgKTtwYWRkaW5nLXRvcDogMTBweDtwYWRkaW5nLWJvdHRvbTogMTBweDtwYWRkaW5nLWxlZnQ6IDEwcHg7IH0g
The Nutcracker
English National Ballet presents the ballet to music by Tchaikovsky, based on the original story by E. T. A. Hoffmann
LnRiLWNvbnRhaW5lcltkYXRhLXRvb2xzZXQtYmxvY2tzLWNvbnRhaW5lcj0iNmIzNDMzNmNmZTc3NWZiNGJlMTVjMmIwMzU3NWM1MjYiXSB7IHBhZGRpbmc6IDI1cHg7Ym94LXNoYWRvdzogNXB4IDVweCAxMHB4IDAgcmdiYSggMCwgMCwgMCwgMC41ICk7Ym9yZGVyOiAycHggZG90dGVkIHJnYmEoIDEwOSwgMTA4LCAxMDgsIDEgKTsgfSAudGItZmllbGRbZGF0YS10b29sc2V0LWJsb2Nrcy1maWVsZD0iODM3Y2ExZjc0MGRjZDdkOTdlMzQzOWMyYjIwMWZmZTMiXSB7IGJhY2tncm91bmQtY29sb3I6IHJnYmEoIDIzOCwgMjM4LCAyMzgsIDEgKTtwYWRkaW5nLXRvcDogMTBweDtwYWRkaW5nLWJvdHRvbTogMTBweDtwYWRkaW5nLWxlZnQ6IDEwcHg7IH0g 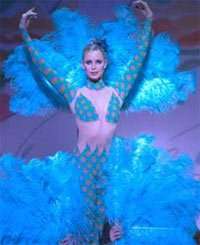 Christopher Hampson’s production of The Nutcracker lies somewhere between the Royal Ballet’s more traditional telling of the story and Matthew Bourne’s contemporary production. All versions are equally valid – they are just different.

The ballet has certainly come a long way since Tchaikovsky composed his score for the original production in 1892 by Marius Petipa at the Mariinsky Theatre in St Petersburg. In fact Tchaikovsky published the ‘Nutcracker Suite’ several months before the premiere, perhaps to allow those unforgettable melodies to enter the public’s consciousness. Although the suite became very popular with the concert-going audience, it was many years before The Nutcracker ballet itself achieved similar status. The music was featured in Walt Disney’s film “Fantasia” in which it is stated that the ballet was by then (1940) no longer performed. Although it was first performed in Britain in 1934 and in America in 1944, in fact productions of The Nutcracker tailed off until 1950 when it was staged by London Festival Ballet, now English National Ballet, and where it has remained in the repertoire in various productions ever since. George Balanchine also created a production for the New York City Ballet in 1954, a production later televised and made into an (unsuccessful) film with Macaulay Culkin.

Since then it has been performed everywhere. Mikhail Baryshnikov has staged it for American Ballet Theatre and Mark Morris has done a version called The Hard Nut. It has crossed over into other art forms as well. Two other films were made of it and there have been ice-show, television, video, animated and puppet versions – including the Care Bears, Barbie, and Tom and Jerry – a computer-animated comedy, and a jazz version called The Swinging Nutcracker. 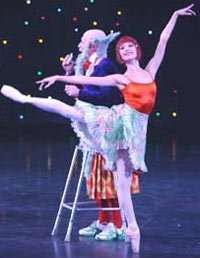 English National Ballet’s current production is quite unlike any other you may have seen. Hampson takes his cue from the highly original drawings of Gerald Scarfe who designed the production with some astonishing concepts. When he first staged it, Hampson wanted to make the piece relevant. As it was at the time of the New York terrorist attacks, so the Act One soldier-mice are depicted as terrorist rodents. Elsewhere Scarfe turns the magician-toymaker Drosselmeyer into a pop-star MC, has Jack Frosts and Snowflakes hurtling out of a giant refrigerator, and a randy old granddad on a walking-frame with a busty lady friend called Ms V Aggra. Clara and her Nutcracker friend are taken to the Land of Snow by a big origami bird and the Kingdom of the Sweets is made of huge boxes of chocolates while little gift boxes and bonbons run around on tiny legs. It’s perhaps not as drastic a re-interpretation as Bourne’s – but I hate to think what Tchaikovsky or Petipa would have made of it.

It is not only visually memorable because the Company engages the audience literally by leaps and bounds. Lisa Probert’s Clara is innocence personified and she exhibits as much a sense of wonderment as does the audience. She is well-partnered by Yat-Sen Chang as the Nutcracker. Sarah McIlroy’s Sugar Plum Fairy executes some beautiful dancing in the ballet’s ‘plum’ role, while Zhanat Atymtayev makes his role as the Prince look so easy, showing an astounding technique in his jumps and extensions. Tamarin Stott as the pneumatic Ms V Aggra is good fun, although perhaps Adam Pudney’s Grandpa is a little over the top. Talking of which Jenna Lee’s Maid is far too much of a caricature to be believable. She would make Su Pollard look restrained. There are some nice turns from the Act Two divertissements: Nick Reeves, Laurent Liotardo and Fernando Bufala in the Spanish Dance ooze to good effect, Asta Bazeviciuté does a gently mysterious Arabian Dance, Anton Lukovkin and Grant Rae charm in the Chinese Dance, and Pedro Lapetra is excitingly athletic in the Russian Dance. As the storyteller Daniel Jones’s Drosselmeyer has all the attributes of a real pop star.

All in all it is a colourful re-interpretation executed with passion that sets out to tell a magical story in modern style. To keep it grounded and to remind us that this is after all just a fairy tale, the whole show is presented framed within a huge story-book. And Tchaikovsky’s sublime music has never sounded better.