Skip to content
LnRiLWNvbnRhaW5lcltkYXRhLXRvb2xzZXQtYmxvY2tzLWNvbnRhaW5lcj0iNmIzNDMzNmNmZTc3NWZiNGJlMTVjMmIwMzU3NWM1MjYiXSB7IHBhZGRpbmc6IDI1cHg7Ym94LXNoYWRvdzogNXB4IDVweCAxMHB4IDAgcmdiYSggMCwgMCwgMCwgMC41ICk7Ym9yZGVyOiAycHggZG90dGVkIHJnYmEoIDEwOSwgMTA4LCAxMDgsIDEgKTsgfSAudGItZmllbGRbZGF0YS10b29sc2V0LWJsb2Nrcy1maWVsZD0iODM3Y2ExZjc0MGRjZDdkOTdlMzQzOWMyYjIwMWZmZTMiXSB7IGJhY2tncm91bmQtY29sb3I6IHJnYmEoIDIzOCwgMjM4LCAyMzgsIDEgKTtwYWRkaW5nLXRvcDogMTBweDtwYWRkaW5nLWJvdHRvbTogMTBweDtwYWRkaW5nLWxlZnQ6IDEwcHg7IH0g
LnRiLWNvbnRhaW5lcltkYXRhLXRvb2xzZXQtYmxvY2tzLWNvbnRhaW5lcj0iNmIzNDMzNmNmZTc3NWZiNGJlMTVjMmIwMzU3NWM1MjYiXSB7IHBhZGRpbmc6IDI1cHg7Ym94LXNoYWRvdzogNXB4IDVweCAxMHB4IDAgcmdiYSggMCwgMCwgMCwgMC41ICk7Ym9yZGVyOiAycHggZG90dGVkIHJnYmEoIDEwOSwgMTA4LCAxMDgsIDEgKTsgfSAudGItZmllbGRbZGF0YS10b29sc2V0LWJsb2Nrcy1maWVsZD0iODM3Y2ExZjc0MGRjZDdkOTdlMzQzOWMyYjIwMWZmZTMiXSB7IGJhY2tncm91bmQtY29sb3I6IHJnYmEoIDIzOCwgMjM4LCAyMzgsIDEgKTtwYWRkaW5nLXRvcDogMTBweDtwYWRkaW5nLWJvdHRvbTogMTBweDtwYWRkaW5nLWxlZnQ6IDEwcHg7IH0g
Raskatov
A Dog’s Heart – Opera in two acts (16 scenes) and an epilogue to a libretto by Cesare Mazzonis after the novel by Mikhail Bulgakov [sung in the English translation by Martin Pickard; UK premiere]
LnRiLWNvbnRhaW5lcltkYXRhLXRvb2xzZXQtYmxvY2tzLWNvbnRhaW5lcj0iNmIzNDMzNmNmZTc3NWZiNGJlMTVjMmIwMzU3NWM1MjYiXSB7IHBhZGRpbmc6IDI1cHg7Ym94LXNoYWRvdzogNXB4IDVweCAxMHB4IDAgcmdiYSggMCwgMCwgMCwgMC41ICk7Ym9yZGVyOiAycHggZG90dGVkIHJnYmEoIDEwOSwgMTA4LCAxMDgsIDEgKTsgfSAudGItZmllbGRbZGF0YS10b29sc2V0LWJsb2Nrcy1maWVsZD0iODM3Y2ExZjc0MGRjZDdkOTdlMzQzOWMyYjIwMWZmZTMiXSB7IGJhY2tncm91bmQtY29sb3I6IHJnYmEoIDIzOCwgMjM4LCAyMzgsIDEgKTtwYWRkaW5nLXRvcDogMTBweDtwYWRkaW5nLWJvdHRvbTogMTBweDtwYWRkaW5nLWxlZnQ6IDEwcHg7IH0g 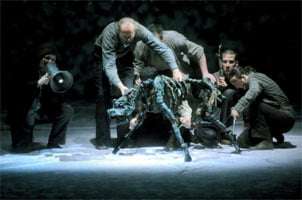 Say what you like about English National Opera, the company has maintained a healthy run of new and recent operas these last few years (some of the best never having been revived, but that’s another story). Nor could one complain of any lack of initiative in its planning: Alexander Raskatov (born 1953) is hardly a household name in the UK – recognised only for his realisation of Schnittke’s Ninth Symphony which has appeared in two different recordings (though not yet received a public performance). Thus it was a brave decision of ENO to tackle his first opera and, in the main, the risk has paid off.

Premiered by De Nederlandse Opera in June, “A Dog’s Heart” is based on Mikhail Bulgakov’s 1920s’ satire – written at a time when the belief in the ‘higher’ education of the proletarian masses was a burning issue. Bulgakov evidently thought this a fallacy (a view that he shared, ironically enough, with Stalin) and gave vent to these convictions in the novella. As adapted by Cesare Mazzonis (and adeptly translated by Martin Pickard), the libretto is appreciably different from earlier Bulgakov realisations (not least York Höller’s magisterial version of “The Master and Margarita”, inexplicably never staged in the UK) – the two acts (of 70 and 65 minutes respectively) unfolding as a sequence of 16 succinct and contrasted scenes, along with an epilogue. The precedent of Shostakovich’s first opera “The Nose” is apparent, as is that of Schnittke’s first stage-work “Life with an Idiot” (staged by ENO 15 years ago), and if Raskatov almost inevitably falls short of the former’s musical audacity and theatrical vitality, he comfortably surpasses the latter’s promising yet ultimately unfulfilled attempt – not least because his second act is the work’s culmination in every respect rather than falling away from the outset. 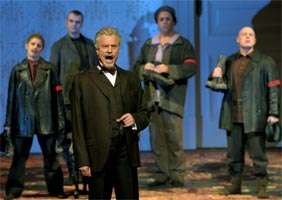 As directed by Simon McBurney, the production centres on an apartment cannily poised between the bourgeois old-world and proletarian new. The appearance of characters and props at various angles to the main set is typical of latter-day ENO, but dramatically apposite both in heightening dramatic tension and pointing up the often-hysterical humour. Designs and costumes are of a piece with this in their non-specific period feel, while the use of inter-war Soviet propaganda film vividly but never crassly ‘sets the scene’ such that one can imagine how the intelligentsia might have fretted over the country’s direction. The presence of McBurney’s company Complicite is most evident in the role of the dog Sharik – portrayed, for most of Act One and the close of Act Two, as a wiry, Giacometti-like figure operated by four puppeteers from Blind Summit Theatre; in the process exhibiting a human range of emotion, not least through the device of his ‘unpleasant voice’ represented by a soprano singing through a megaphone and his ‘pleasant voice’ by a countertenor, in a synthesis of fantasy and alienation which in itself places this opera firmly within the context of 1920s’ radical theatre. 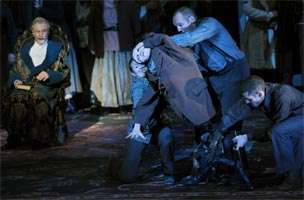 Radical is not the most appropriate description of the music, though on its own terms the score is a pragmatic and resourceful one. The presence of Mahler (via Berg), Shostakovich and even Britten is not hard to detect – though Raskatov can hardly be taken to task for this when many other operas, British or otherwise, have been excused such influences over the past three decades. Nor can those allusions to Rossini, Mussorgsky and Tchaikovsky which are, for the most part, there in the service of the drama rather than merely to impress. In terms of dramatic pacing, Act One gets bogged down during its central scenes as Raskatov rather sacrifices the narrative thread for several not overly distinctive character-portrayals, but the operation scene in which Sharik the dog becomes Sharikov the man has a spine-tingling intensity that not even the expletive-ridden pay-off (funny how British audiences still laugh at such things as though the latest in cutting-edge humour) can undermine. Act Two rarely, if ever, loses musical or dramatic focus – revolving around a sombre yet suspenseful inquest between the Professor and his assistant, and culminating in a ‘revelation’ of darkly Orwellian humour.

Such an opera leaves relatively little room for character development, but Steven Page gave a masterful portrayal of Preobrazhensky – somewhere between Henry Higgins and Ivan Michurin in his conceit and ambition, with a degree of (im)moral authority that compels the admiration of others. Leigh Melrose was incredulous yet always supportive as his assistant Bormenthal, while Peter Hoare stole the show as Sharikov – devouring volumes of Engels as readily as he murdered cats and abuses ‘other’ humans. Andrew Watts brought soaring eloquence to Sharik and sent up the portentousness of Vyasemskaya, while Elena Petrovna was sympathetic as Darya, but Nancy Allen Lundy could do little with the inane coloratura of Zina (a part seemingly derived in its essentials from that in Thomas Adès’s “Powder Her Face”). Alasdair Elliott was a dull-headed Shvonder and there were distinctive cameos from Graeme Danby as an ominous Big Boss and Frances McCafferty as a capricious patient. Sophie Desmars was a naïve fiancée and Matthew Hargreaves an uncomprehending Investigator. Garry Walker conducted with real flair and incisiveness, while never passing over the occasional moments of expressive poise.

Assessing such an opera depends, in the first instance, on whether one considers those sentiments expressed by Bulgakov to be out-datedly repugnant or timelessly relevant. Not that Raskatov slants the argument one way or the other: rather he underlines the inherent danger, verging on disaster, when scientific practice is pursued in the abstract – irrespective of genetics or culture. Whatever else, “A Dog’s Heart” provokes and in a deeper sense other than the merely gratuitous: in achieving this and within the context of a theatrically entertaining evening, it certainly warrants anyone’s attendance.