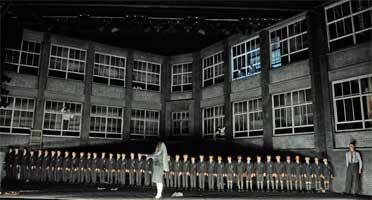 It was an out-of-body experience to attend the second performance of a production as controversial as English National Opera’s new “A Midsummer Night’s Dream”. Forty-eight hours on from the first night, with the buzz (and a few buzzards) still circling around Christopher Alden’s interpretation, the Coliseum’s very fabric seemed to bristle with collective excitement as though someone had run five-hundred volts through Britten’s most lyrical opera.

As Peter Reed makes clear in his eloquent and perceptive first-night review (see link below), from a musical perspective this is a distinguished evening. Leo Hussain and the ENO players bewitch the ear, not least at transitional moments where pace and dynamics are impeccably judged, while the cast is particularly fine. Kate Valentine and Allan Clayton (as Helena and Lysander respectively) are the pick of the lovers; Michael Colvin and Simon Butteriss (Flute and Starveling) stand out among the Mechanicals. The coloratura of Anna Christy is insufficiently lyrical for Tytania, while Sir Willard White, the great and venerable, would be a fine Bottom in a more orthodox production, but he seems understandably ill at ease here. These, though, are small reservations. 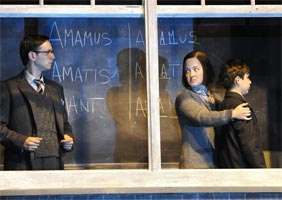 For Iestyn Davies, or at least for his vocal cords, the second night was his first. Indisposed two days previously, he had acted the role of Oberon while William Towers sang from the side of the stage. Happily restored to health, the crème-fraîche timbre of Davies’s voice compounded his disturbing presence as a creepily paedophilic schoolteacher, and his silken countertenor was laced with a stinging edge of the kind Britten would have relished.

Would Britten have savoured Alden’s production quite as much? Probably not, although that is hardly our concern. The purists who complain that it’s not what Britten wrote would do well to remember that directors regularly breathe new life into established works through radical reinterpretation. Audiences who have previously enjoyed Jonathan Miller’s Mafia “Rigoletto” or OperaUpClose’s Kilburn “La bohème” have already opened their minds to new approaches – even though ‘it’s not what Verdi or Puccini wrote’ – so why not Britten? He’s been dead for a generation and his operas are oft-revived, so they’re fair game. Yet, in a gesture of cross-party support, with Alden’s “Dream” there are points where I side with the conservatives.

As a rule, Alden’s radical interpretations, like those of his equally gifted brother, David, are the product of an incisive mind being inspired by music towards a scenic response. The results can illuminate a score despite their wilfulness, or even thanks to it. Here, though, the director reduces “A Midsummer Night’s Dream” to a stick with which to beat its composer – or at any rate to anatomise his psyche – and to hell with the music. In the process he tells us nothing we didn’t already know about Britten and his boys; yet he stages it in such a way that the opera itself – in its orchestration and scoring as well as its text – no longer hangs together. We have to ignore whole swathes of Shakespeare’s meaning in order to swallow Alden’s dramaturgy and accept that for the most part what we see will be at odds with what we hear. As for the comedy, although Alden neutralises it he’s stuck with it in the score, as he is with Britten’s eerie conjuring of night and silence. There are clever moments galore, ranging from the use of spliffs for herbal love-juice to Oberon’s grooming of the Changeling Boy (a mute acting role added to Britten’s cast) in a Brittenesque act of transferred affection from the post-pubescent Puck, but from start to finish I got the impression of a director who profoundly dislikes the work he’s directing. The only time Alden shows empathy with Britten’s score is during the lovers’ awakening in Act Three (‘And I have found Demetrius like a jewel’). Intentionally so or not, that is magical.

Last year I bestowed unconditional love on another Christopher Alden dream-inspired production, Janáček’s “The Makropulos Case”. Perhaps my disappointment with this new “Dream” arises from jealousy that he has transferred his affections to another, younger masterpiece. Or perhaps, for all my protestations, I’m upset because it’s not what Britten wrote.