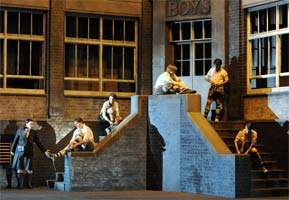 There have been quite a few opera productions set in schools recently – Richard Jones’s naval-academy “Billy Budd”, a classroom “Lohengrin” from Germany, Bayreuth’s current “Meistersinger”. The RSC in its Barbican days had a school-based “Dream”; and then there is “The History Boys”. Like a murder mystery in a remote country house, the school is just as potent a setting for extremes of isolation, exposure and obsession, and especially so in Christopher Alden’s new production of “A Midsummer Night’s Dream” set in Charles Edwards’s bleakly imposing fixed set of a facade of a grey, 1920s-1930s institution with an entrance unequivocally marked “Boys” carved in stone, opening onto the ‘enchanted forest’ of a school quadrangle, for a public-school-type co-ed grammar school, if there ever was such a thing. 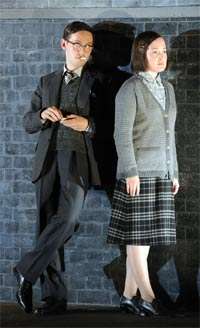 If it’s fairy magic that you’re after, then this “Dream” is not for you. Alden has cut straight to the chase with a vision of growing up and self-discovery via passions (they used to be called pashes) for unattainable/unsuitable objects of desire, which are so intense because they have no reference to limited, adolescent experience, a dream of loss of innocence and the tragedy of aspiring to adulthood, with the irresolvable, murky pain and regret this can cause. It’s very convincing, and at times very moving. Alden has observed the all-important hierarchies meticulously. Oberon and Tytania are headmaster and music-mistress; the lovers are seniors on the point of leaving school; the fairies (with a smattering of more grown-up, non-singing boys) are small lads inventing the weird rules and rituals of their enclosed world; the six mechanicals are janitors, maintenance men and kitchen porters in overalls, who, as they emerge and disappear through the basement windows of Edwards’s rigorously hierarchical set, clearly know their below-stairs place. 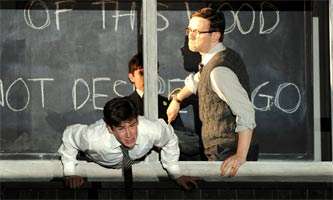 Puck’s brilliantly directed, resentful enthraldom to an abusive, manipulative and malevolent Oberon is given an extra dimension by Alden’s invention of Theseus, brilliantly acted and, eventually, sung by Paul Whelan, being seen throughout as an ‘old boy’, about to get married, who is revisiting his Alma Mater – and we all know the poignancy and, frequently, the pointlessness of revisiting somewhere or someone who used to be absolutely central – and finds his younger self in the confused, distressed Puck. At first it was puzzling, but then gathered force, and by the end was devastating. 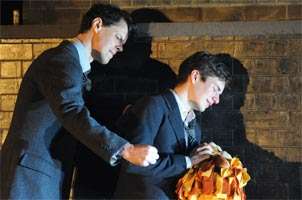 Disaster nearly struck when, due to illness, countertenor Iestyn Davies had to withdraw his voice from Oberon – he acted the part, very well, which was sung, superbly, by William Towers (on a mercy-dash from “Rinaldo” at Glyndebourne) – ‘I know a bank’ was properly sinister and sinuous. Anna Christy’s brittle, precise coloratura served this dowdy, repressed, twin-setted Tytania well. Poetic Lysander and football-hero Demetrius were incisively drawn by Allan Clayton (who sounded fine despite a warning that he, too, was ailing) and Benedict Nelson; Hermia and Helena (Tamara Gura and Kate Valentine) less so, although impressively sung – ‘I swear to thee’ was a memorable highlight, as were the two quartets. Jamie Manton’s sad, sullen Puck was the sort of cool, slacker youth who says “I go, I go; look how I go” and remains rooted to the spot; and the magic flower he gathers is “liberating” cannabis. In the Act Two ‘love‘-scene between Bottom and Tytania, the fairies took over the school with the same sort of anarchical, Lord-of-the Flies-style abandon as lunatics taking over the asylum.

The six Rustics, instead of injecting some earthy, comic relief, were thoroughly folded in to the repressive atmosphere – the spliff that Bottom and Tytania share released something but it sure wasn’t magic, and the “Tragedy of Pyramus and Thisbe” (the play within a play) was delivered with a basic, crude fury – Moonshine moons; a drunken Wall (as played by Snout) pisses against, well, a wall and is then sick – that produced only a few short-lived laughs. The usually extravagant Willard White was severely reined-in as Bottom, sonorously sung and finely acted, and graphically the object of dark, rough desire; Jonathan Veira’s impressive Quince was about the only part that could have been moved to a more conventional staging; Michael Colvin used his fine tenor to great effect as Flute, even better as an outrageous Thisbe; and Alden prepared the ground for Graeme Danby’s thick, sports-coach Snug’s rape of Thisbe during the play. Leo Hussain conducted and the orchestra played Britten’s score with a clear, incisive idea of just how sinister and dark this music can be, of how dangerous an area the subconscious really is, where life really happens. Britten’s “Dream” is sometimes seen as a one-off among his operas, simply because it isn’t, or so we thought, driven by the theme of corruption of innocence that obsessed the composer. Well, Alden has certainly addressed that head-on, and given it a darkness that continues right through to a very non-benign conclusion. It manages to be both compelling and joyless. Quite an achievement.