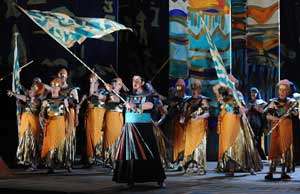 “Aida” the opera is a funny old bird. It has retained its place in the repertoire despite its failings: constantly the story is being explained and it limps along without ever really getting going, excepting the ballet section. The rest is all rather downbeat with one character pleading with another without much characterisation. Verdi’s masterpieces (among them “Don Carlo”, “Simon Boccanegra”, “La forza del destino”, “Falstaff” and “Otello”) all successfully combine the essential operatic elements of fluid narrative, sympathetic music and thoughtful libretto, resulting in a much more fulfilling experience – that is not to say that these masterworks are easy operas to put on.

But, “Aida” does fall short and so it is essential that the production team really pull out all the stops to tell the story with utmost commitment. And English National Opera does. 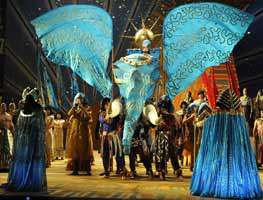 This outing of “Aida” – a co-production with Houston Grand Opera – marks a rapid, and welcome, return for Jo Davies’s production. Blue, orange and gold are the colours that greet the eye, washing away any dismal thoughts of the Credit Crunch. Some of the sets may resemble the scenery that Fred Flintstone would feel at home in but an attempt is made to be realistic, the caveat being the confines of the stage of the London Coliseum. In a coup de théâtre Radames is brought in (during the triumphal march) on a mock-up elephant, a superb design. Aspects of the lighting now work a lot better than previously. In the final scene, where Radames and Aida sing of their love, huddled together, buried alive in a tomb, the stage is now dark other than two spotlights illuminating the pair and so making for an intimate and heart-breaking moment: a simple staging device yielding effective results.

The dramatically successful moments are those where the sets support the action and allow it to unfold without being intrusive. Particularly effective is the Act Four judgement-scene where the chamber is behind a grille. This separates the hapless Amneris from the priests though she, and we, can see what is going on.

The cast, excepting Ramfis and Messenger, are the same as created the production and their security in the parts showed to the benefit. Gwynne Howell is a hardy perennial for ENO, here celebrating his fortieth-anniversary with the company. He continues to bring grandeur and constancy to the parts he now sings. There was one lapse but, otherwise, this was as convincing an interpretation of the Pharaoh as one could hope to see. Ramfis was superbly sung by Matthew Best. His bass-baritone was wonderfully black, infused with evil, carrying every word with great security. 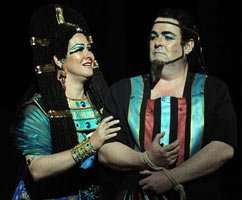 John Hudson’s Radames was a lightweight affair. There were many occasions when he needed to be more forceful with his voice, and there were moments where his diction was too mouthy, lacking articulation. The effect was that he came across as weak and feeble rather than the heroic individual willing to go to his death for love and conviction. There was no sense that he was plotting his actions; events happened to him rather than the other way. The other two points on the love triangle with him are Aida and Amneris, daughter of the Pharaoh. Jane Dutton invested the latter – dressed like Cleopatra out of “Carry on Cleo” – with secure singing and an ability to plunge to the low notes, where bitterness and bile lie; her grief as Radames is judged was palpable. However, too often she came across as a ‘spoilt little rich kid’ and there was a temptation to scream: “For God’s sake, you’re the daughter of the Pharaoh. Show some decorum!” as she waved her arms and pouted. 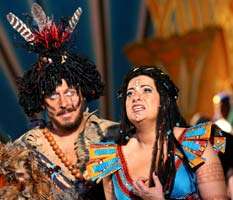 Claire Rutter’s Aida was a more satisfying portrayal. She traversed affectingly the mixed emotions in her Act One aria ‘Ritorna vincitor’. It benefited from Rutter’s ability to sing pianissimos with confidence. The three protagonists together, however, did not work. Their Act One trio lacked the finesse of ordinary conversation. The singers were unmatched and the English translation fails to mould the words together; Italian is always better at this. Aida’s father Amonasro (King of Ethiopia) is a transient part but was fortunate to have such a great exponent as Iain Paterson who made one sit up and notice every nuance. He had the strongest voice on the night and his duet with Aida (on the moonlit banks of the Nile) outside the temple of Isis had a freeness to it that really excited, matching his character’s excitement at being able to win his battles with the Egyptians.

The music from the pit was more of a mixed bag. All began well enough with a Prelude that dripped in mystery but then the playing ambled until the outbursts, which were riveting. The orchestra had fire in its belly for the penultimate scene with the cellos powering through. The trumpets for the ‘Triumphal March were the best I have heard; not a misplaced note and evocative of glory whilst being very precise. Some individual contributions were well executed, especially the bass clarinet at the opening of Act Four and, elsewhere, there were pertinent oboe and flute solos supporting the singers. The Chorus was in fine voice, too.

All in all, this is a welcome revival. What this Aida does not achieve, though, is a sense of grandeur. The sets are too clumsy for that. It would be difficult to have the Temple of Isis (Act Three) on a rocky hill far above the banks of the Nile! However, what is accomplished is conveying the intimacy of the story and for this reason Act Four is a triumph.