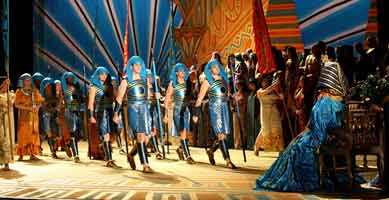 There was something of a buzz at the Coliseum before this opening performance of “Aida”; one that has been absent there for a little while. Yes, anticipation of the colourful designs of the irrepressible Zandra Rhodes had something to do with it for sure. However, “Aida” is a work that is regarded as one of those operatic war-horses that you have to do well. It is everyone’s idea of what ‘Grand Opera’ is all about. English National Opera has been banking on this production – and it’s good to report success.

Nowadays, it is always something of a surprise when one is confronted by a new production of a work that essentially plays it straight and is devoid of directorial tics and impositions, and that is what Jo Davies gives us. The drama was enacted in unashamedly conventional operatic style, with some suitably old-fashioned big semaphore acting – and how refreshing that can be. Verdi and his librettist knew what they were doing. I rather enjoyed Zandra Rhodes’s colourful and playfully camp designs. Big bold colours, a slightly two-dimensional presentation, and a stage full of comic-book Egyptian imagery – lots of pyramid shapes, columns, hieroglyphics, and masses of gold in the costuming. Throw in heavy and stylised wigs and make-up that must have kept manufacturers of fake-suntan products in business over the British summer and you get the picture.

Although visually stimulating, there was seriousness to them as well. The Act Four judgement scene, dominated by an Egyptian eye set in a grille, allowed Amneris to go on her scenery-chomping rants against the priests whilst you actually saw the judgement going on behind the bars. This worked both sonically and visually (more often than not the judgement is heard from off-stage). Also the night sky in the Nile act was dominated by a pair of eyes, presumably those of the watchful and all-knowing goddess Isis, imparting a sense of unease and danger to the drama unfolding. The final scene was also well staged with the doomed lovers bathed in light gradually becoming enclosed in the darkness of a pyramidal shaped tomb. The triumphal scene was certainly given its due, with some interesting dance, and even the appearance of an elephant. For those drawn by fashion and designs there’s much to enjoy visually.

Musically too! Edward Gardner’s conducting of this work as if it was middle-period Verdi might not be to all tastes. He certainly is not one to linger and it did feel that he was a young man in too much of a hurry. The ‘Prelude’ immediately set the scene in that it was somewhat lacking in mystique, allure and poignancy. The orchestra was mostly up to Gardner’s challenging tempos; there was some very fine playing from the flutes, piccolo, and the various clarinets. The sinewy string-playing at the start of Act Three was also very evocative of a balmy night. Again, Gardner took this passage at a pretty fast tempo but effectively so. The lower strings were also excitingly incisive at Amonasro’s first appearance. 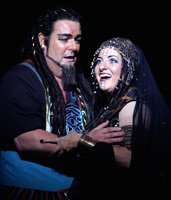 The singers were well matched too. In these days, when Verdi singers, like Wagner ones, appear to be an endangered species, operas such as “Aida” can be hard to cast. Perhaps some of the soloists were light-voiced for their roles but they were all well and satisfyingly matched. Aida is not the easiest role to bring off as she is rather reactive to events in the drama and is often left commenting on her predicament. Claire Rutter managed to make her rather more positive a character than some interpreters, and she certainly knows what the part is about vocally. She has the tone to ride the big climaxes without pushing or sounding shrill, and she certainly knows about high pianissimo singing – a vital weapon in the armoury of any singer thinking about taking on the part. Both her arias were well sung, although the effect of her nicely sung ‘O patria mia’ was marred by the rather acid sound of the accompanying oboe.

Amneris is the more overtly dramatic part, and Jane Dutton gave a big reading of it. She has all the big-breathed high-notes in her armoury, and also knows how to make her presence felt. What she perhaps lacks is those really baritonal chesty low notes that the greatest interpreters of the part have brought to it. The interpretation was not subtle, but as with all good Amnerises she made the most of her many opportunities. Sarah-Jane Davies’s off-stage High Priestess was superb. 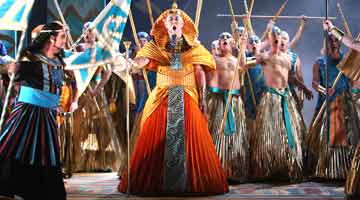 It was a pleasure to hear and see Gwynne Howell as the Pharaoh, making very word tell and sounding more amazingly rich-voiced that he has for a little while. Why is it he has always sounded better in this house? Brindley Sherratt’s Ramfis did perhaps not impose himself on the proceedings as strongly as needed. Ideally the role needs a blacker and fuller voice, but he rose to the challenge of the judgement scene where he suddenly seemed to really find form.

The real surprise of the evening was Iain Paterson’s Amonasro. His apparent move upward from bass to bass-baritone reveals him to have a superbly integrated and exciting Verdi voice, particularly at the top where it opened out and rang into the auditorium wonderfully nobly and freely. The dramatic temperature rose from the moment he opened his mouth. Every word was audible, too. John Hudson’s Radames was the slight weak link, but he has all the notes and sang with some sense of style if with little finesse. He’s not much of an actor either but given the conventional nature of the staging this did not matter so much as it might have in a more ‘modern’ staging.

The chorus was on good form and diction was very good. The translation used was that penned by the late Edmund Tracey, that was very much part of ENO’s last production of the 1970s and ‘80s. On the whole it has largely stood the test of time, although occasionally it sounds contrived, but as evidenced by the superfluous nature of the surtitles is obviously very singable.

All in all this was a very enjoyable evening, and the buzz was still there at the end. Hopefully this heralds a start of a revival in the fortunes of English National Opera.