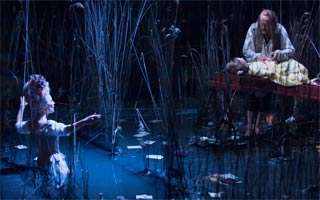 Even among those dramatic works that come under the aegis of expressionist theatre, there can be few more unequivocal instances than Jakob Lenz – Wolfgang Rihm’s opera which has amassed a fair number of revivals since its 1979 premiere in Hamburg, and not least a UK presentation at the Almeida Festival almost a quarter-century ago. 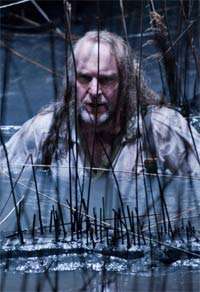 This new production, initiating what is hopefully a long-term partnership between English National Opera and the Hampstead Theatre, is the first to have been given in English and makes for a timely perspective on a piece whose impact and relevance has, perhaps surprisingly, lessened over time.

Back at the time of its world and even its UK premieres, Rihm had seemed intent on mediating between the often antagonistic facets of Expressionism and Modernism to have beset many composers (not necessarily German-speaking) during the post-war era. Since then, his increasingly sizable output has often been in thrall to composers (notably Mahler, via Berg, to Zimmermann and Nono) in the context of whom he can appear an epigone – drawing on the salient aspects of their musical idiom so that what emerges is a viable and pragmatic fusion but too rarely a distinctive, let alone personal synthesis. 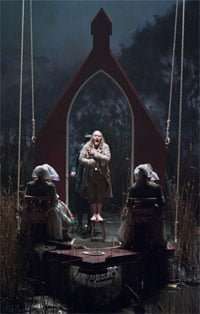 With hindsight this explains much about the strengths and failings of Jakob Lenz: its gritty and mostly unrelieved dissonance less the outcome of a compelling musical treatment than an expertly applied gloss on a subject which has become stereotyped in consequence. This is in part because Michael Fröhling’s libretto, admirably realised on its own terms, limits the expressive potency of Georg Büchner’s 1835 novella that, whatever its objectivity and detachment, evokes its protagonist and his situation with a piercing insight and pitiless compassion – compared to which Jakob Lenz the opera tends too much towards the gratuitous in its depiction of the human mind in extremis.

What the present production does not lack is physical impact: Sam Brown may have approached the project with not a little trepidation, but his production places the drama in a fitting theatrical context – its foreground a putrid environ overflowing with water in which the eponymous anti-hero attempts (almost literally in this instance) to drown himself on several occasions. Elsewhere the female figures and mountainous landscapes of Lenz’s fevered imagination take on an amorphous unreality the more disturbing as his persona implodes during the final scene. Annemarie Woods’s designs are wholly in keeping with the late eighteenth-century setting, but the portraying of the writer Kaufmann as a camp poseur adds a further and unnecessary layer of alienation: no more convincing, indeed, than those elements of a more lyrical German Romanticism which periodically come to the surface in Rihm’s 70-minute score as if attempting to secure greater empathy between drama and audience.

Andrew Shore carries off the demands of the title-role with unwavering conviction as he encompasses its extremes of jagged declamation and tortured arioso. As the compassionate if vexed pastor Oberlin, Jonathan Best brings welcome humanity; Richard Roberts gives his all as the unappealing Kaufmann and Suzy Cooper is arresting as Friederike – Lenz’s female infatuation. Her almost entirely silent presence has been effectively drawn in this production. The adult-female and the children’s voices are well integrated into the musical whole, and Alex Ingram secures an unflinching response from members of the ENO Orchestra.

No-one experiencing this production is likely to be disappointed by its dramatic veracity or impact. Yet the suspicion remains that Rihm’s opera is both a constriction and compromise in its rendering of the original in theatrical terms, lacking the all-round expressive subtlety which is needed to convey its existential dilemma.