Monteverdi
The Return of Ulysses – Dramma per musica in three acts to a libretto by Giacomo Badoaro after Homer’s Odyssey (books 13–23) [sung in an English translation by Christopher Cowell; performing edition by Jonathan Cable (2009)]

Members of the Orchestra of English National Opera
Jonathan Cohen 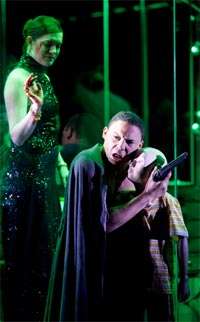 Musically, this new production for English National Opera at Young Vic of Monteverdi’s penultimate opera “Il Ritorno d’Ulisse in patria” (The Return of Ulysses) is non-contentious, save for numerous cuts and the three acts being played as two. Assorted talents from the luxury end of the casting catalogue provide a many-hued vocal palette that’s underpinned by richly textured playing from a hybrid ensemble of ‘period’ specialists and ENO string-players under Jonathan Cohen. With the likes of Nigel Robson and Diana Montague in minor roles and Erin Headley bowing her lirone, this is an evening of pure aural delight.

The staging by Benedict Andrews is likely to divide audiences, though not necessarily in ways he intends. This Australian director, who has forged a radical reputation at the Schaubühne am Lehniner Platz Theatre in Berlin, upends a sackful of spiffing wheezes onto the Young Vic stage, so the evening is never the least bit dull even if some of its ideas are a touch hand-me-down. The moment Andrews reveals designer Börkur Jónsson’s immaculate Perspex house, Windolened to within an inch of its life, we know that someone or other will spend the evening messing it up; and so it proves as food, drink and body fluids progressively hit the walls. Other clichés in the director’s ragbag include fright masks, confetti, cunnilingus (twice in the first twenty minutes), Vuitton suits, a dreary puppet and a superfluous pair of video screens. Yet the production as a whole transcends its clutter, because underneath the folderol Andrews demonstrates such an acute sensitivity to the psychology of the characters. 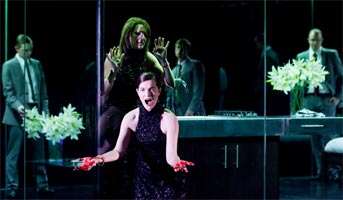 We join Homer’s “Odyssey” in its home straight with the focus on Penelope, the long-suffering wife of the absent Ulysses (here ‘Ulisse’ – anglicised to ‘Oo-lee-say’ in Christopher Cowell’s otherwise handsome translation) as she fends off a trio of unwelcome suitors during a ten-year vigil for her long-lost husband. When the eponymous hero finally arrives back in Ithaca, guided home by the goddess Minerva, he slays the suitors and reclaims his faithful beloved. The killing spree occurs in a welter of bullets and blood spatter (those walls suffer again) that seems completely out of character for Tom Randle’s outwardly humane Ulisse. This though is one of the strengths of the production: Andrews shows us a good man who has been numbed by war and is capable of exploding with rage like an abused dog. If the parallels Andrews draws with modern warfare are unoriginal, they are always pertinent and reflect what we have learnt even in my own lifetime about the brutalising impact of battle on the human psyche. 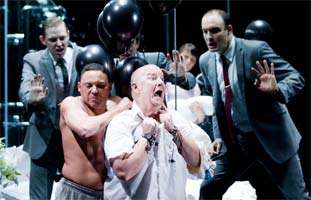 Randle delves deep within himself in order to convey Ulisse’s turmoil. By the opera’s close he is utterly spent – and not just from singing, for this is a great acting performance by any standard. The purity of his rich tenor voice adds a dimension of paradox to the character’s troubled soul as it dawns on us that beauty and heroism have their dark side. As his wife, Pamela Helen Stephen emotes rather more than Randle yet lives less inside her character’s skin. The decision to depict Minerva as Penelope’s alter-ego is very well realised, but it does lead to a goddess appearing more exercised by the warrior’s fate than his wife seems to be. Ruby Hughes is one of several singers who excel in this production: Katherine Manley and Thomas Walker make an outstanding pair of below-stairs lovers, and there’s a welcome, too, for the return of Brian Galliford to his homeland after a career largely spent on the opera stages of Europe. He treads a fine line between musicality and grotesquery as Iro, the gluttonous mound of mutton who leeches off the suitors (among whom the golden-voiced Samuel Boden stands out) as they in turn prey on the vulnerable yet strong-willed Penelope. In Monteverdi’s dog-eat-dog world, only the fittest survive – an ambivalence towards morality that the composer would explore even more keenly in his final opera, “L’Incoronazione di Poppea”.