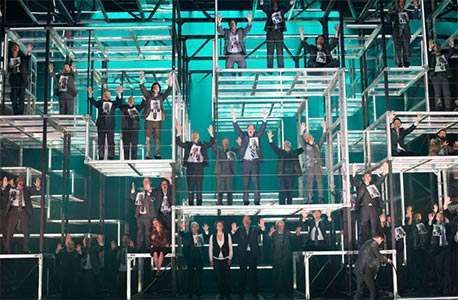 For all his iconoclastic reputation, Calixto Bieito has provoked extremes of reaction that sometimes add something to our relationship with whatever opera he’s giving a good seeing-to. The frail applause and half-hearted booing at the end of his staging of Fidelio – a co-production with Bavarian State Opera (where it was first seen at the end of 2010) to open ENO’s new season – Indicated bafflement as much as a lack of enthusiasm, a poor compliment to Beethoven’s hymn to the love that liberates.

Bieito’s point is that we’re none of us free, neither personally nor politically, we inhabit prisons, often of our own making, that keep us in and others out. This was powerfully realised by Rebecca Ringst’s set, a contemporary Piranesi labyrinth of glass, steel and harsh lighting that filled the stage, its inescapability made clear by the impotent, exaggerated writhing of Florestan and his co-prisoners during the Overture. Never one to do things by halves, Bieito rammed home his point with hyperbolic, hyperactive thoroughness. Instead of the usual Fidelio Overture, we got the much longer Leonore No.3, a tone-poem précis of the drama including the all-important trumpet rescue signals (thus stealing their thunder in the opera itself), during which we see prisoners scurrying around like mice in a maze and Leonore transforming herself into Fidelio by flattening her bust with tape. Where Leonore No.3 is sometimes used – between the dungeon scene and the finale – Bieito inserts part of the slow movement, the ‘Hymn of Thanksgiving’, from Beethoven’s String Quartet Opus 132, the players of the Heath Quartet descending angelically from the flies in metal cages, which made a succinct emotional point even if you had reservations about Bieito self-servingly reducing Beethoven at his most spiritual to mere a sound-bite. 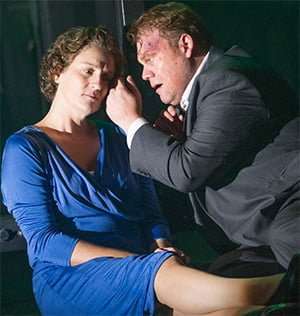 To add to the musical manipulation, Bieito compounds his hermetically sealed vision of Fidelio by having the singers recite desolate poems by Borges and Cormac McCarthy, with spoken dialogue reduced to a minimum – In fact, the first thing we hear, before any music, is Leonore reciting one of the Borges poems. If you didn’t already know the opera, Bieito’s approach played havoc with the narrative – for instance, there was no preparation for the ‘Prisoners’ Chorus’, powerfully sung by the men of the ENO Chorus, all dressed in dusty middle-management suits, that is, as prisoners of work.

For an opera described as having been written three times, with four overtures and two titles, Fidelio has always been an ungainly drama; Bieito’s interpretation distils it almost to dramatised oratorio. There were some telling moments – Jaquino isolated from his three co-singers during the Act One quartet; the huge set slowly collapsing over Florestan at the start of Act Two; Leonore’s offering of bread to her husband as an explicit reference to the Catholic Mass; and, movingly, Leonore (no longer Fidelio) left alone during the playing of the string-quartet movement (well, some), contemplating her achievement. But you also had to set those against the well-worn Bieito repertoire of people writhing around, changing clothes, bright lights shone straight into the audience, and strange, barely decipherable details, such as Florestan singing part of his Act Two soliloquy as a message into a mobile phone, and lots of business with scattering bits of paper. 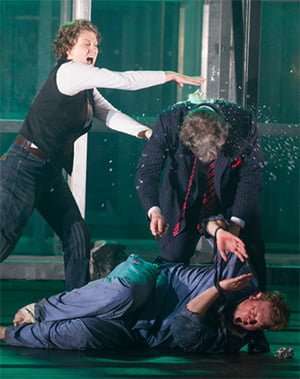 The result was clear enough, if distancing. The finale, though, was bizarre, with Don Fernando (Roland Wood), the deus ex machina who clinches the rescue element of this rescue opera, appearing from one of the stage-side boxes as a baroque, mincing aristocrat in frock-coat and wig – a change from the Munich original, in which he was like the Joker in Batman – who in all the general rejoicing shoots Florestan, who pretends to be dead. Or is he reborn? Search me. Fernando then scrawls the word “Free” on the bits of card hanging round the chorus singers’ necks. Unresolved, then, despite the music’s unequivocal glory? Or Bieito on irritating, obfuscating autopilot?

Emma Bell was a luminous heroine, her rich soprano full of passion and warmth, if rather forced at the top and not always secure in the awkward vocal line in ‘Namenlose Freude’. Stuart Skelton brought raw anguish to Florestan’s soliloquy to alleviate Bieito’s analytical construct. Philip Horst was an underpowered Pizarro, although vividly at home with all the pantomime villainy; James Creswell’s characterfully sung Rocco was undermined by being presented as a cipher of greed and pragmatism and hampered by yet-more muddled Bieito business involving a briefcase full of money handcuffed to his wrist. The Fidelio-Marzelline-Jaquino love triangle didn’t stand much of a chance, although Sarah Tynan’s singing was charming and fresh and Adrian Dwyer’s unforced, lyrical tenor made Jaquino’s sidelining more than usually poignant.

Edward Gardner and the ENO Orchestra worked hard to honour the spirit of Beethoven’s most powerful credo. Leonore No.3 was as exalted as I’ve heard it, and decidedly romantic, almost Wagnerian, and the support he gave the singers was full of telling detail.