Bellini
Norma – Opera in two Acts to a libretto by Felice Romani [sung in an English translation by George Hall, with English surtitles] 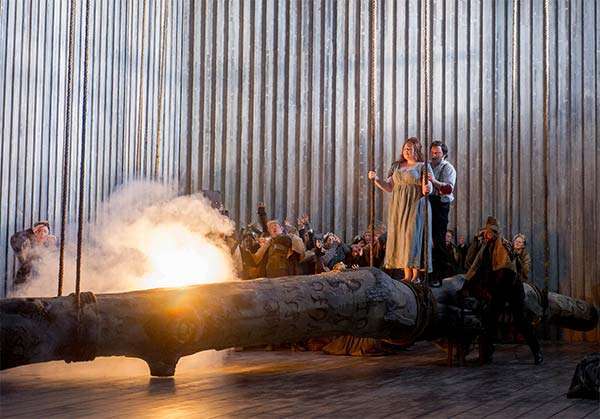 With English National Opera struggling for its future, this staging – or rather, Opera North’s, first seen in 2012, so there were no surprises – of Bellini’s Norma, bel canto’s most sacred of sacred cows, is the company’s first. Dramatically and musically, it’s one of the most exposed roles for a soprano in the repertoire, and, even after 60 years, it still comes with the shade of Maria Callas’s tragedy and triumph, reminding those aspiring to the role to be afraid, to be very afraid. For this staging, ENO has continued its love-affair with American singers, who take three of the leads.

One of the things that director Christopher Alden has got right is the build-up of expectation to the first appearance of Norma herself – she’s the supposedly chaste Druid priestess, still in love with the father of her two children, the Roman consul Pollione, the latter having switched his affections to another virginal priestess, Adalgisa, Norma’s closest friend. It was worth the wait.

Marjorie Owens is every inch the tragic heroine, puzzled by her vulnerability, and trapped by her faith, her monstre sacré status and her mortal conflicts. How she managed to maintain the role’s dignity among all the distractions the production throws at her is anyone’s guess, but it confirmed the stature of her performance. And she sings magnificently, with a voice of Wagnerian stamina that seeks out the endless refinements and nuances of the musical style. Her control of timbre as she pushed securely ever higher in her hymn to the moon god, ‘Casta diva’, sculpting Bellini’s phrasing and decorations, was noble and ecstatic, which is fine if that’s all you want from Norma, but she topped even that pinnacle in the ensembles with Adalgisa and Pollione that get to the heart of things. 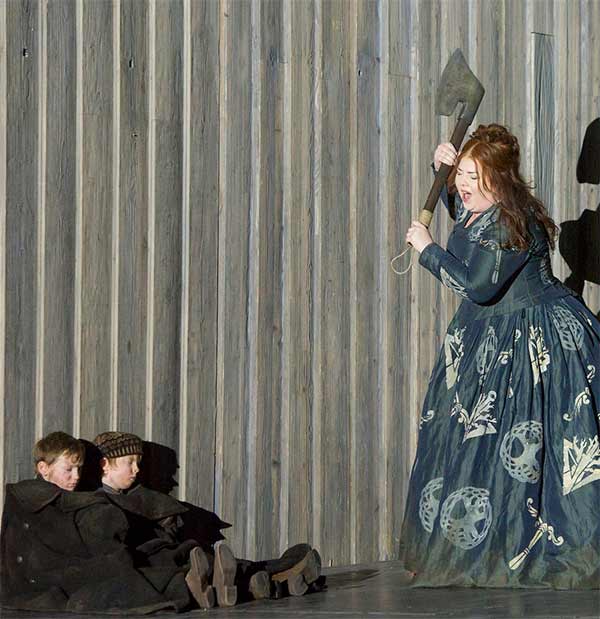 Norma’s two duets with Jennifer Holloway’s Adalgisa were gripping, Holloway’s full-toned voice contrasting and blending marvelously with Owens’s. The pair of them also proved to be fine singer-actresses as they come to terms with Pollione’s infidelity. The role of Adalgisa is vital to defining Norma and pushing the drama on – she is no shrinking violet – and Holloway, along with some welcome non-interference from Alden, made the point strongly, even to the point of saving the evening.

The two-timing Pollione is a thankless undertaking for a tenor – there isn’t a lot that can be done to rescue such a boo-hiss villain. British tenor Peter Auty, much experienced in the bel canto world, set the ball rolling impressively with the opera’s first solo number, perhaps overdoing the scoops upward to the note but producing an open, attractive sound. Bass James Creswell sang the other male lead, Oroveso, Norma’s long-suffering father, with ample volume and intense dark tone. As Clotilde, Norma’s friend, and Flavio, Pollione’s henchman, Valerie Reid and Adrian Dwyer respectively both made their mark vocally, despite being victimised by the direction.

Alden has moved the setting from Gaul under the jackboot of ancient Rome to something like an Amish community in nineteenth-century America being spooked by Victorian men in frockcoats, presumably pursuing some sort of Edenic despoliation. It didn’t really cut it in terms of rampant oppression, and Charles Edwards’s fixed set of a barn interior dominated by a tree-trunk in the process of being carved by the brethren into a totem-pole, denies access to the spirits of the moon and nature, both of which loom large in the libretto. 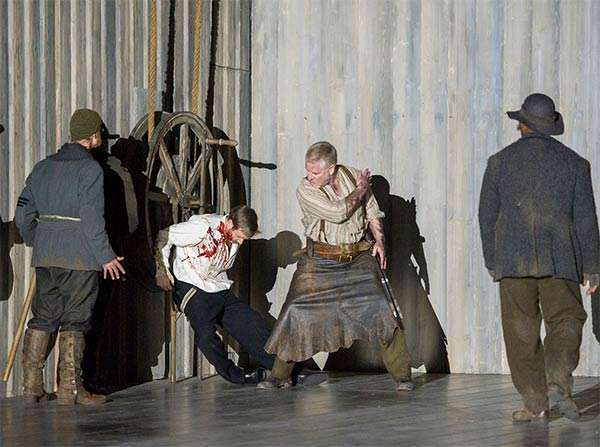 Maddeningly, Alden gives the big moments their due – the start of the first Act, leaving some of the crucial ensembles to get on with it – but then more often and more memorably, it seems he couldn’t wait to go overboard with any amount of fussed-up stage-business, some mystifying, some laugh-out-loud ludicrous (not a good sign, especially in a tragedy like this), such as Norma running her finger along an axe-blade as she contemplates the revenge-murder of her two children. He also went to town with the phallic potential of the tree-trunk, which struck various positions, was straddled by Pollione and Norma, and provided their funeral pyre at the end.

It was all the more remarkable that Stephen Lord’s conducting absorbed all this with Olympian elegance. He is well known for his bel canto sympathies, but he surpassed himself here. You’d almost not realise that Norma is a ‘numbers’ opera given his accompaniment of recitative melted imperceptibly into aria, and those familiar arpeggiated upbeats from the orchestra became freighted with meaning and atmosphere. His feel for the music’s pulse ensured that the music flowed and always kept faith with the drama. Given the simplicity of Bellini’s orchestration and harmony, this was a great piece of work both from conductor and the ENO Orchestra, which found colours and details in the score you didn’t know were there.

In the first Act, the Chorus, in a prolonged sequence, is required to make a big deal of paying their dues to their overlords, which they did with emphatic asperity, reminding the audience of the current sackings and pay cuts these singers face as the management seeks out savings. A chorus is one of the defining components of an opera company, and it was right that it received the loudest applause at the curtain call. They need support.