Skip to content
LnRiLWNvbnRhaW5lcltkYXRhLXRvb2xzZXQtYmxvY2tzLWNvbnRhaW5lcj0iNmIzNDMzNmNmZTc3NWZiNGJlMTVjMmIwMzU3NWM1MjYiXSB7IHBhZGRpbmc6IDI1cHg7Ym94LXNoYWRvdzogNXB4IDVweCAxMHB4IDAgcmdiYSggMCwgMCwgMCwgMC41ICk7Ym9yZGVyOiAycHggZG90dGVkIHJnYmEoIDEwOSwgMTA4LCAxMDgsIDEgKTsgfSAudGItZmllbGRbZGF0YS10b29sc2V0LWJsb2Nrcy1maWVsZD0iODM3Y2ExZjc0MGRjZDdkOTdlMzQzOWMyYjIwMWZmZTMiXSB7IGJhY2tncm91bmQtY29sb3I6IHJnYmEoIDIzOCwgMjM4LCAyMzgsIDEgKTtwYWRkaW5nLXRvcDogMTBweDtwYWRkaW5nLWJvdHRvbTogMTBweDtwYWRkaW5nLWxlZnQ6IDEwcHg7IH0g
LnRiLWNvbnRhaW5lcltkYXRhLXRvb2xzZXQtYmxvY2tzLWNvbnRhaW5lcj0iNmIzNDMzNmNmZTc3NWZiNGJlMTVjMmIwMzU3NWM1MjYiXSB7IHBhZGRpbmc6IDI1cHg7Ym94LXNoYWRvdzogNXB4IDVweCAxMHB4IDAgcmdiYSggMCwgMCwgMCwgMC41ICk7Ym9yZGVyOiAycHggZG90dGVkIHJnYmEoIDEwOSwgMTA4LCAxMDgsIDEgKTsgfSAudGItZmllbGRbZGF0YS10b29sc2V0LWJsb2Nrcy1maWVsZD0iODM3Y2ExZjc0MGRjZDdkOTdlMzQzOWMyYjIwMWZmZTMiXSB7IGJhY2tncm91bmQtY29sb3I6IHJnYmEoIDIzOCwgMjM4LCAyMzgsIDEgKTtwYWRkaW5nLXRvcDogMTBweDtwYWRkaW5nLWJvdHRvbTogMTBweDtwYWRkaW5nLWxlZnQ6IDEwcHg7IH0g
Britten
Peter Grimes – Opera in a Prologue and Three Acts to a libretto by Montagu Slater after George Crabbe’s poem The Borough [sung in English, with English surtitles]
LnRiLWNvbnRhaW5lcltkYXRhLXRvb2xzZXQtYmxvY2tzLWNvbnRhaW5lcj0iNmIzNDMzNmNmZTc3NWZiNGJlMTVjMmIwMzU3NWM1MjYiXSB7IHBhZGRpbmc6IDI1cHg7Ym94LXNoYWRvdzogNXB4IDVweCAxMHB4IDAgcmdiYSggMCwgMCwgMCwgMC41ICk7Ym9yZGVyOiAycHggZG90dGVkIHJnYmEoIDEwOSwgMTA4LCAxMDgsIDEgKTsgfSAudGItZmllbGRbZGF0YS10b29sc2V0LWJsb2Nrcy1maWVsZD0iODM3Y2ExZjc0MGRjZDdkOTdlMzQzOWMyYjIwMWZmZTMiXSB7IGJhY2tncm91bmQtY29sb3I6IHJnYmEoIDIzOCwgMjM4LCAyMzgsIDEgKTtwYWRkaW5nLXRvcDogMTBweDtwYWRkaW5nLWJvdHRvbTogMTBweDtwYWRkaW5nLWxlZnQ6IDEwcHg7IH0g 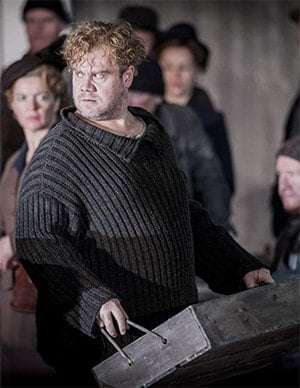 For all the familiarity of his portrayal – ENO 2009, Proms 2012 and in London just a few months ago – Stuart Skelton remains a charismatic and compelling interpreter of Peter Grimes. In this revival, featuring a return for several of the original cast, not least Skelton of course, one sensed a deepening of response to the music, the libretto and the whole Community caboodle. It’s the chattering throng that we hear first, silenced by Grimes’s appearance at the inquest set up to ascertain the death of the fisherman’s (first) apprentice. Already Grimes, for all that he is a local, is ostracised. He stands alone in a set that is ingenious in its use of trestle tables. This Borough is closed and bigoted, save for school ma’am Ellen Orford, willing to be a friend to Grimes, and the old seadog Captain Balstrode, a free thinker, his limp no doubt due to a few skirmishes at sea.

Although David Alden’s production conveys well a claustrophobic atmosphere, much is exaggerated – think Little Britain – but Skelton’s Grimes, owing nothing to previous interpreters (from Pears to Vickers with several others in between) remains an idealistic dreamer, easily upset, paranoid, shy, socially awkward, yet with redeeming features. Yet when he attacks Ellen and his new, forbidden, apprentice John, he shows another side to his personality. He is a human in need of help, of which there is very little and of which he can be suspicious.

Edward Gardner conducts with urgency and also conjures an eerie chill, the ENO Orchestra playing with a fire-and-ice beauty, although the ‘Storm’ Interlude lacks the last degree of attack and vehemence. 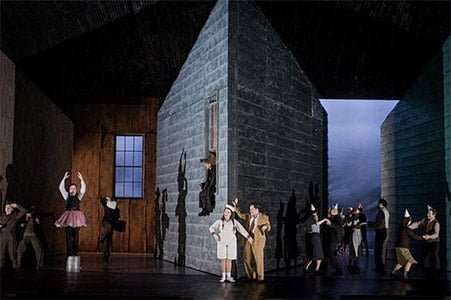 From there to the hostelry known as “Auntie’s”, with a fireplace and chairs – snug! – and run by a cross-dressing woman carrying a golf-club; carry on swinging! Her nieces, given to movements akin to Scottish dancing and robotic hand gestures, seem to have been at the ‘waccy baccy’. In the same location, but a world-away, Skelton offers a remarkably wistful ‘The Great Bear and Pleiades’, sotto voce and full of half-lights. Orchestrally, if not everything quite came off on this first night, the ‘Passacaglia’ that pivots Act Two and charts Grimes’s further descent into madness was compelling not least because of a viola solo made hauntingly expressive across the instrument’s range. The ENO Chorus is in terrific form, the mob’s shouts of “Peter Grimes” in Act Three had a crazed thunder that pinned us to our seats.

Ellen Orford, sweet, demure yet stoical – determined to do the right thing for Peter – finds Elza van den Heever in fine voice, soft and gentle but also opening out gloriously when on full throttle; enunciation is not her strongest point but she conveys well a member of the Borough who is her own lady. As Balstrode, Iain Paterson grew in greatness throughout the evening; like Ellen he doesn’t join the herd and his brand of ‘tough love’ finally sinks Grimes, literally … gone fishing. In the opera’s final moments, Skelton held us spellbound on a bare stage as he considers his last moments and flashbacks. He knows there is no way out. 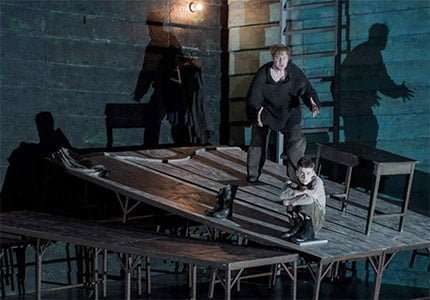 The cast is uniformly impressive and if some aspects of the production seem unfulfilled – not least creating a palpable sense of outdoors – and with distracting/detracting motions (I’ll circumnavigate a row of chaps urinating against a wall – an ENO trademark if true to life) then this is certainly compelling theatre to complement a great score and a musical assumption that is top-notch, Skelton giving Grimes a human and softer edge, which makes his volatility all the more shocking.

Always best to be there, in the same building, but ENO has joined the worldwide cinema junket, and Peter Grimes is scheduled to be silver-screened on 23 February.


23 February 2014, Empire Cinema, Leicester Square, London – As a postscript to the above first-night review, there followed an invited opportunity to savour this production of Peter Grimes in the cinema, English National Opera’s first such venture, in conjunction with AltiveMedia. It was shown in some 300 venues in the UK and Ireland and also in selected cinemas worldwide. For all that being in an opera house offers a connection with the performers and a freedom for the eye that cannot be replicated by other means, seeing opera on the big screen brings an immediacy to the action that isn’t necessarily a given in the House itself (partly determined by where one is seated).

Reservations can be expressed about certain aspects of David Alden’s staging, but on this occasion these were swept aside by the well-plotted direction for the movies by Andy Morahan that gave pertinent close-up focus to the singers’ portrayals of The Borough’s characters and with it a vividness that opened up their circumstances and emotions: it was all very involving. Stuart Skelton was once again stellar as Grimes, and, through this medium, Elza van den Heever as Ellen Orford was something of a revelation.

This matinee to-cinema performance was broadcast live, yet, for whatever reason – and I have no technical explanation or solution for this – the picture seemed ‘less live’ and the sound more ‘recorded’ than one would have expected. Of course, in any one cinema the result would no doubt be different, so whether as something ‘designed’ within ENO or effected on its journey to – in my case – the comfortable and bijou Empire No.4 Cinema (just across the road from The Coliseum!), I cannot say.

Gratefully, though, the sound was never too loud (a cardinal mistake for films these days) and was quite dynamic, but the aural aspect seemed somewhat processed and was edgy, the solo voices sometimes ‘lost in space’ in a halo of reverberation, the orchestra occasionally mushy, yet the latter was in greater focus at other times, such as during the ‘Sea Interludes’, given here with a welcome tour of the pit to see players normally hidden from view, Edward Gardner an inspiring presence. Meanwhile the picture was leaning towards low-resolution rather than HD (although it was not claimed to be the latter as far as I know).

While basically good, and it’s welcome and encouraging that ENO has joined the ‘in cinema’ trend – bringing opera to people that may not have a chance to see it in the flesh, and Grimes is a great ‘starter’ – although one can certainly praise Morahan’s direction (his eyes were expert ones to see with, Alden’s production made that more convincing), and subtitles were a boon, I cordially suggest to the good folk at ENO that, even with the allowed-for vagaries of any one cinema’s respective systems, that a higher-resolution picture and less-encumbered sound needs to be sought; it doesn’t need to be louder (oh dear no!) but it does require to shake off what seemed at times far-away and added-to in this particular venue on this day.

One wishes ENO all the best with this venture (I should add that my guest, a Grimes veteran, thought that the relay was terrific and shared none of my technical reservations), which, cinematically, continues in a few months’ time with Terry Gilliam’s stage-direction of Berlioz’s Benvenuto Cellini, which could be a golden production.