Berg
Wozzeck – Opera in three acts to a libretto by the composer after the play Woyzeck by Georg Büchner [sung in the English translation by Richard Stokes, with English surtitles] 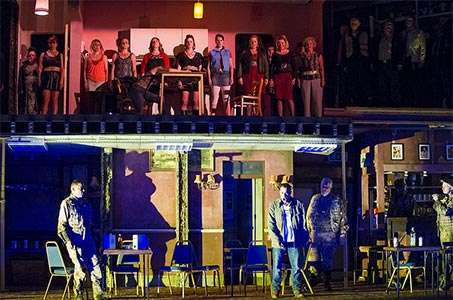 In a subversion of the traditional approach (as far as any such notion can be applied to a work like Wozzeck), opera tyro Carrie Cracknell forgoes the familiar grotesqueries of German Expressionism in favour – on the surface at least – of stark, contemporary realism. With combat-kitted soldiers and Union Flags placing us firmly in the Britain of today, the director uses Berg’s bleak work to consider an under-discussed human corollary of modern warfare: post-traumatic stress disorder.

“Welcome back, boys!” screams the poster on a pub wall in Tom Scutt’s virtuosic, three-tiered composite set … but to what? There is precious little optimism to be found as Berg’s fifteen scenes grow into a mosaic of drug-fuelled deprivation, corrupt hierarchies and images of high-rise hell. It’s the new nihilism: an everyday story of sick-country folk. With three lions on his football shirt Wozzeck wears the irony of his decline like a badge, cuckolded not just by his partner Marie but by society as a whole. 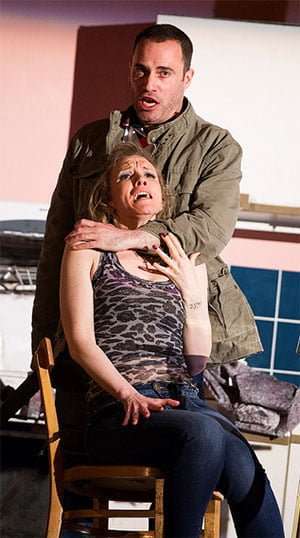 The production, though confidently mounted and wonderfully lit (by Jon Clark), is not perfect. It’s much too busy with symbolic clutter, a flaw that suggests Cracknell is over-anxious about shoe-horning her concept into the text. With more experience of opera she should become more willing to let the music take care of that side of things rather than seeking out a visual parallel for every allusion. Yet her ideas are often profound, and moments such as a pub filled with children-as-adults and Wozzeck’s frantic search for a knife he already has in his hand are unusually disturbing.

Two distinguished visitors from the United States have thrown themselves into Cracknell’s uniquely British hell. James Morris, one of the most outstanding of Wotans, was a massive vocal presence as a Doctor who (as Wozzeck perceives it) deals in Class A drugs; one sensed Edward Gardner unleashing the dogs of the ENO Orchestra whenever they underpinned the great bass-baritone, secure in the knowledge that he could out-sing any ffff that came his way. As for soprano Sara Jakubiak, she was a revelation. Prodigious technical resources ensured that her vocal lustre never degraded, even in stratospheric passages, while dramatically she invested Marie with the shameful desires of a lonely soul.

As the Captain, Tom Randle reprised his semi-buff military persona from Monteverdi’s Return of Ulysses (ENO 2011), this time with all heroism stripped away in favour of gaudy tats and bling. The burly tenor let rip with an intimidation that contrasted sharply with Adrian Dwyer’s calm portrayal of Wozzeck’s friend Andres, here a wheelchair-bound former-combatant reduced to playing war games on an X-Box in his garden shed. Clare Presland played Marie’s neighbour Margret as a vulgar, karaoke-singing soak while a third American, Bryan Register, was equally persuasive as Marie’s boorish seducer.

Leigh Melrose laid bare the title character’s psychological scars in a bold, fitful performance, firmly characterised and disquietingly sung. It was a tour de force. Afflicted by confusion and flashbacks, his mind clouded by memories of war (Berg’s ‘Idiot’ is played by Peter van Hulle as a gas-masked soldier – perhaps a vision of Wozzeck himself?), this former soldier’s life is a nightmare; and, as the entire drama unfolds through his eyes, the only images we can trust to be true are Marie’s adulterous culpability and Wozzeck’s hand in her blood-soaked comeuppance.

Gardner conducted like a man on a mission to familiarise the world with a masterpiece. With Berg, he seemed to be saying, the rocks of atonality are porous and music which may appear forbidding is in fact flecked with passages of the utmost beauty. Gardner’s musical fracking revealed more such moments than I can ever recall hearing in Wozzeck, and the ENO Orchestra played magnificently for him.

For all its darkness, Cracknell’s production is more dialectical than angry and offers mature insights into themes of contemporary relevance in a way that has often eluded ENO in recent years. With this Wozzeck the company has created a mirror of our times, if anyone dares to look within.