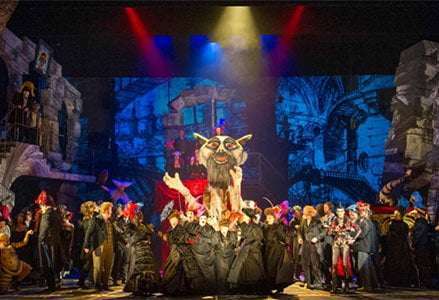 Terry Gilliam cut his opera-directing teeth on his ENO staging of Berlioz’s Damnation of Faust in 2011, in fine style, and his obvious empathy with Berlioz flows, aptly, like molten metal in this new production of the composer’s first opera, Benvenuto Cellini, about the dramas ensnaring the sculptor in his casting of his statue of Perseus, commissioned (in the opera, though not in real life) by Pope Clement VII.

Benvenuto Cellini has been absent from the London stage for 40-odd years. ENO has done it proud, and, as a co-production with Amsterdam and Rome opera houses, this staging is like to define a lot of people’s experience of the work for some time – not bad for a piece with a notable identity crisis, performed here in its opéra semi-seria version (with recitative rather than spoken dialogue).

It’s one of the most lavish productions to be seen at the Coliseum, and there’s an irrepressible, even exhausting ebullience to the directing, matched by extravagant sets, costumes and video projections, all of it galvanised by Edward Gardner’s electrifying effect on the ENO Orchestra, which, along with the Chorus, has to make light of some truly challenging music. 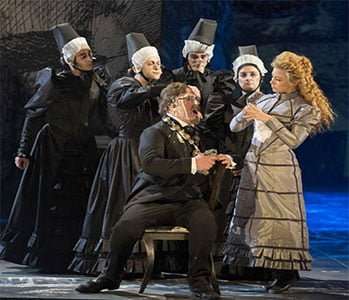 Gilliam’s updating from the Renaissance to an anachronism-prone Victorianism, a period closer to Gilliam’s brand of visual humour and excess, supports the secondary plot of Teresa’s defiance of her father Balducci (who controls the Pope’s purse-strings) by setting her sights on the wastrel artist Cellini rather than the jobs-worth sculptor, Fieramosca, her father has chosen for her. Gilliam uses the familiar Overture to set up both the rivalry between the two men and, in the ticker-tape Mardi Gras procession through the stalls, the ascendancy of chaos that dominates the opera. In the process, though, it alerts you to the flaw in the work itself, which always seems to straining to move on to the next big thing – the Roman carnival, the entry of the Pope, the casting of Perseus – at the expense of the reflective moments about love and the calling of high art, a contrast Wagner would exploit so thoroughly in Die Meistersinger von Nürnberg (due at ENO next season).

Gilliam’s feel for spectacular overload will not disappoint – giant puppets, Perseus’s golden head, acrobats, a gallery of grotesques including a prodigiously endowed Pantalone, and goblin-like metal-workers make mayhem against the crazy perspectives of the Piranesi-inspired set, everything building to the casting of the statue itself, a brilliantly tense finale, with terrific video projections by Finn Ross, that can’t resist having the last laugh as we find ourselves gazing at a particular area of Perseus’s flawless anatomy. The spirit of Monty Python is alive and kicking.

The singing was excellent. Michael Spyres soared through the heights and difficulties of the title role with heroic, ringing abandon. His voice is massive, but his quieter range was no less effective in the aria where he contemplates the joys of a simple life as a shepherd. As the artist-genius against the world, he had the swagger necessary for the part. Another American singer, Corinne Winters negotiated Teresa’s coloratura with seamless security and elegance and looked stunning as Cellini’s feisty squeeze. Willard White, singing with beautifully focused tone, was an extraordinary creation as the Pope, a sort of gilded, baroque Samurai warrior, ready to grant absolution for anything from murder downwards so long as he gets his statue, and his retinue of guards saw Gilliam going into camp overdrive.

Nicholas Pallesen (also American) had a notable success as Fieramosca, not only in his fine singing but also in his vigorous comic acting as the fall-guy on the receiving end of much slapstick humour. Paula Murrihy, in the travesti role of Ascanio (billed here as Cellini’s business manager rather than his apprentice), was enchanting in her solo aria, completely diverting attention away from a big scene-change; and as Balducci Pavlo Hunka had the measure of the stock comical figure of the over-protective father. Cellini’s two bovver-boy foremen were a special pleasure, played with brio as proto Teddy Boys by Nicky Spence and David Soar.

As for the ENO Chorus, this was its finest hour, singing with style, weight and athleticism, as well as managing the many complicated moves flawlessly. Charles Hart’s sly translation flowed into Berlioz’s complex rhythms with ease. The other hero was Edward Gardner, conducting with enormous flair and pace and drawing a sound that embraced the blend of vulgarity, bombast, energy and tenderness defining Berlioz and his ‘problem’ opera. It’s a triumph.