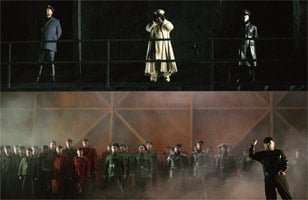 An inspiring Britten production from English National Opera: salt sea spray, psychological profundity, revelatory ensemble scenes, a mesmerising title performance… yes, David Alden more than silenced his doubters with a flowing production of Peter Grimes. That was three years ago. Now, alas, his reputation as a thoughtful iconoclast is likely to ebb a little, for the same creative team’s newly-launched slant on Billy Budd disappoints in exactly those areas where its predecessor scored so impressively.

Comparisons are invidious but inevitable, particularly as ENO’s pre-publicity has understandably made great play of the Grimes connection, for what we have here is a dour, drab Budd conducted by Edward Gardner with a savage rigour that accentuates the score’s cruelty but denies the romance, dark though that be, which resides at its heart. He runs a very, very tight ship. To be fair to ENO’s Music Director, who is not normally averse to emotional sweep (as this season’s Der Rosenkavalier showed), his interpretation accurately reflects the director’s concept. 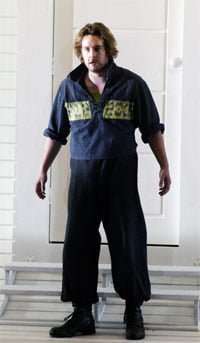 We are locked deep within the belly of a pre-Glasnost Eastern Bloc super-tanker, delivering who-knows-what to who-knows-where. Hardly the HMS Indomitable of Herman Melville’s imaginings, then, although that would not matter if Alden’s alternative had something worthwhile to say. I’m not sure that it does. Too often the libretto catches the director out; for instance Vere’s symbolic opening line to Act Two, “I don’t like the look of the mist”, is solved in a laboured way by apparently causing the engine room to emit an excess of steam (although not even that is made entirely clear). As for the constant references in a modern setting to Anglo-French warfare, these may possibly play better to audiences at The Bolshoi Theatre, which is where this production is destined to set eventual sail (although what the Russians will make of all the Soviet aping is anyone’s guess).

It does not help that some of the principals seem uncomfortable in their roles. That normally acute singing-actor Matthew Rose has all Claggart’s notes, but the rigid physical presence he is required to adopt extended to his voice, which was empty of psychological colouring. And he looks too soft to be hard. As for Budd himself, Benedict Nelson may have overplayed Billy’s puppyish enthusiasm – if he had a tail he’d wag it – but to his credit he brought an array of nuances to the opera’s least complicated character. The problem is that vocally he seems under-cast in a role that demands heavier resources than he currently possesses. Anyone who sings the title role in Billy Budd needs to be capable of cutting across a swirling orchestra and roaring male chorus, but at present Nelson lacks the power to do that. Far more affecting were the opera’s intimate moments such as Billy’s soliloquy as he awaits his execution – a scene he delivered with heartrending sensitivity.

It might have been interesting to see a young Claggart pitted against a young Captain Vere, as would have occurred if Toby Spence had been able to take on the latter role as was originally planned. Instead, Kim Begley has stepped into the Captain’s shoes as a distinguished but hardly fresh-faced substitute, and his performance is fascinating for different reasons. Begley is terrific as the broken old man of the ‘Prologue’ and ‘Epilogue’, and the frayed edge to his voice in those scenes gives way to a younger but equally harrowed version of himself during the significant scenes in Vere’s tube of a study. Resplendent in a white uniform, Begley was dressed like a good guy of old while Master-at-Arms Claggart, who ascends from a below-decks hell on his first appearance, was clad in black from head to toe, as monolithic as the vessel he inhabits. Alden certainly doesn’t shrink from stereotypes when they serve his purpose: Claggart the blackguard roamed the ship with all the subtlety of Ridley Scott’s Alien.

Duncan Rock’s Donald and Nicky Spence’s Novice lit up the stage whenever they appeared; while from an older generation Jonathan Summers played Redburn with something approaching a twinkle in his eye (he even came perilously close to twirling his cane during the light relief of “Don’t like the French”) and another welcome veteran, Gwynne Howell, brought great compassion to the role of Billy’s friend Dansker. The young Midshipmen were particularly good, too, acting with gusto and belting their interjections through rich low-treble registers. Ultimately, though, there is something missing from the production, and its absence was keenly felt. The sea.