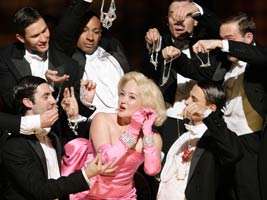 Others have welcomed this staging. I take a contrary view. In fact, I find it quite awful and a dreadful travesty of the scenario over which Leonard Bernstein laboured long and hard, authorising – and recording – a definitive performing edition a year or so before he died. The chief problem is the total re-location of the events set in Europe, for which Bernstein wrote his musically affectionate “Valentine to Europe” (Bernstein’s comment, originally made in a BBC Television interview, on the nature of the music is quoted in the programme, though the date cited is incorrect). Thus, Westphalia (Germany) becomes “West Failure” (yes – how we laughed), all too obviously Washington DC, with Candide et al. as children of the First Family resident at the White House. So Robert Carsen’s view of the work becomes blatantly anti-US and the setting and projections show iconic American images from the 1950s and 60s, with footage of John F. Kennedy and Marilyn Monroe prominent.

Indeed, in this production, Cunegonde would appear to be a Monroe lookalike. But Bernstein’s “Candide” isn’t about this, and one of the factors contributing to the work’s success towards the end of the composer’s life was the fact that for the first time all the music was in the correct geographical place – i.e. the Paris setting had Parisian music, Venice Venetian and so forth. But geography and suitable locales had little place in Carsen’s production. For instance, it was not made clear how Cunegonde managed to get to Paris in Act One, or why Candide and his friends travel back to the New World. Eldorado is now a deserted Texan highway and Venice Las Vegas. The Old Lady’s ‘I am easily assimilated’ is transferred from Spain in Act One to on-board a ship in Act Two, thus making nonsense of the lyric. The final image is a striking one – as the company sang ‘Make our garden grow’, projections of pollution and the spoiling of nature are seen. But this deliberately subverts Bernstein’s potently positive music and message, and the same might be said for other episodes but – one must concede – that this is probably Carsen’s intention, and in which case he succeeds brilliantly. 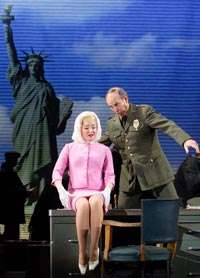 The execution of this production seems well-nigh-flawless – choreography was lively, if not always apt for the drama – and the cast certainly seemed to have entered into the spirit of Carsen’s conception, though I sensed I was often watching cartoon characters rather than human ones. I didn’t detect much ‘chemistry’ between Candide and Cunegonde (Marnie Breckenridge took-over the role from Anna Christy on 2 July) – fatal when they are, in effect, the figures around whom the drama centres. The strongest vocal performance came from Bonaventura Bottone, a veteran of his multiple-roles; he painted a particularly sleazy Ragotski and sported some terrific top notes in the ‘Governor’s serenade’ and ‘Bon voyage’ in which he also excelled at the rapid patter and Bernstein’s queasy cross-rhythms.

Toby Spence was not an especially charismatic central character, though he sang attractively enough. However, the touching ‘Eldorado’ (again, the lyric rendered ludicrous in this staging) needed more legato singing and was much too loud and heavy from both singer and orchestra. Breckenridge, personality-wise, suggested an ingenious cross between an airhead and a calculating whore, but her singing was somewhat tremulous; undeniably accurate, it wasn’t always attractive to listen to. An interpolated laugh following the climactic high note in ‘Glitter and be gay’ was not a good idea – whoever’s it was. (And there was a strange flute glissando accompanying the words ‘gilded cage’ which is not in the score.) 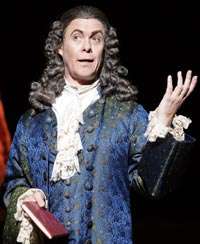 Beverley Klein’s Old Lady bursts with character, though she has a noticeable ‘break’ in her voice between the chest and upper register, so some of the music sounded a little uncomfortable for her. Alex Jennings was a personable master-of-ceremonies, narrating the story in a fairly cynical manner and thoroughly convincing as optimist Doctor Pangloss and his antithesis Martin the pessimist.

The remainder of the company is cast from strength – Mark Stone’s Maximilian standing out for firmness of tone and projection. Others sometimes had difficulty with the latter; the dialogue was sometimes unclear, especially when accompanied by underscoring. Texturally speaking, this is pretty complete. Pangloss’s ‘Dear Boy’ is cut, as are parts of the auto-da-fe (which is staged in most questionable taste as a Ku Klux Klan gathering with flaming torches). Pangloss’s solo from that scene explaining the source of his syphilis is transferred to the penultimate one and presented as a sort of cabaret number as is ‘We are women’, which was one of the few moments which really came off convincingly. Breckenridge and Klein were hilarious as two unconvincing-looking showgirls waving feathers.

Rumon Gamba was efficient enough in the pit though there is more poetry in the score than he cared to reveal. The gentler, elegiac moments need more nurturing as the more rumbustious passages are not short on decibels. There was some fine wind playing; conversely, there were some vulgar sounds from the tuba, and the side drum was too insistent. An instrument with a smaller diameter and tauter snares would be preferable. Ensemble within the orchestra was not always spot-on, though co-ordination between pit and stage was usually good.

Robert Carsen has clearly put on a ‘good show’ and, of itself, his scenario is not uninteresting. But it doesn’t work with this score. (One of the criticisms, incidentally, levelled against Lillian Hellman’s original book at the time of the 1956 premiere.) Perhaps he can collaborate with a composer to explore the issues he raises. Leonard Bernstein’s “Candide” needs more sympathetic direction than it receives here.