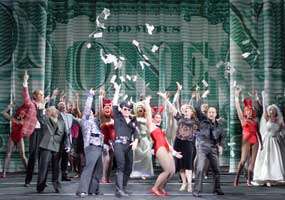 It was controversial from the off and it took “Candide” (Leonard Bernstein’s operetta) many years to arrive at the state it is at now – but, like the journey of Candide (Voltaire’s hero), it has been worth it. New directors begin here … because it is now possible to present an unruly piece that at first resisted success and then, with contributions from many extra hands, its first revival succeeded up to a point. Now, after several other revivals, it seems to have found a safe place in which it works perfectly and yet without having to slavishly stick to the 1956 original.

“Candide” was a work in progress. It was mooted in 1953 as a piece for music by Bernstein and a libretto by playwright and screenplay author Lillian Hellman, taking Voltaire’s political satire and making it relevant to American society. However, setting it in the Senator McCarthy era brought many problems for both Bernstein and Hellman.Whereas Bernstein wanted to compose an operetta using disparate musical styles – Gilbert & Sullivan, Offenbach, Bellini, and many dances – for what he called “a personal love letter to European music … an American’s Valentine to Europe … a pastiche”, Hellman’s reason was born out of hatred of the “House Un-American Activities Committee” (HUAC). When asked to name names in the Communist witch-hunts she made her famous reply: “I refuse to cut my conscience to fit this year’s fashions”. Her career in Hollywood subsequently petered out. Bernstein had only his passport withdrawn for a short time. 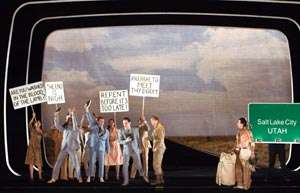 When “Candide” finally opened on Broadway in 1956, it survived only 73 performances. Perhaps in the mid-1950s America was not grown-up enough to accept such a political satire. After much rewriting and the addition of such as Stephen Sondheim and Dorothy Parker, Hal Prince’s 1974 production played over ten times longer. Beforehand Lillian Hellman had withdrawn her libretto after various rows following the original’s failure. A new book by Hugh Wheeler was used for the revival and it is on this that subsequent productions have been based. However, every time “Candide” has resurfaced it has been tinkered with. Before he died Bernstein gave his blessing to the Scottish Opera production adapted by John Wells and directed by Jonathan Miller, which was well-received and came to London. Since the Old Vic, the National Theatre and Southbank Centre have staged it. 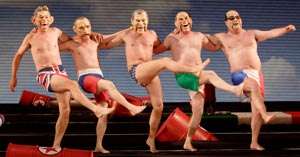 Now it appears in another radically new form, directed by Robert Carsen, at English National Opera following productions at Théâtre du Châtelet in Paris and La Scala, Milan. The latter house initially turned it down because it didn’t approve of some of Carsen and his designers’ inventiveness – such as the scene with Blair, Bush, Chirac, Putin and Berlusconi in bathing trunks. However, they got around that and it enjoyed success. Carsen has lightened the piece with many jokes, aural and visual, and made the piece such fun that it is almost impossible not to like it. This is no ponderous tale of war, earthquake, murder, mutilation, drowning at sea and an auto-da-fé, although all those events do happen, but instead it’s a delightfully droll look at the world from a wry angle, that pokes fairly gentle but firm fun at the horrors of modern life. It’s still Voltaire, Jean, but not as we know him and it’s still a portrait of the innocent Candide’s perpetual search for his love Cunegonde who he thinks he has lost in an outbreak of war. But he carries on because a philosopher has told him that everything is for the best in the best of all possible worlds and, anyway, the subtitle of the book is ‘Optimism’. 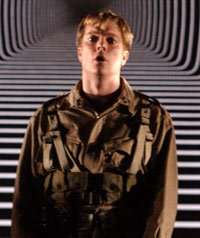 Framing the whole piece is a vast 1956-style television set, the cathode ray tube that in the 1950s seemed to be the answer to everything with its propaganda advertising of the typical all-American family at work and at play with nary a sign of what was happening underneath with a government department trying to control the thoughts of the general public. Where Hellman used a sledgehammer to get her points across, Carsen’s production uses a scattergun of comic effects and it works brilliantly well. Designer, Michael Levine, keeps the television theme running giving the piece the look of a cheap 1950s TV variety or game show in which décor was minimal and played in front of a very theatrical curtain, before TV invented its own style and was still mimicking the stage. The tabs form a big dollar bill, which is almost a religious icon for the USA, while costume designer Buki Shiff turns Cunegonde into Marilyn Monroe for her ‘Glitter and be gay’ coloratura number. 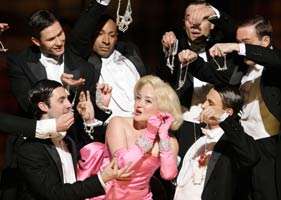 Bernstein’s sprightly music can survive any staging but here it fits in beautifully with Carsen’s production, which gives every number (‘The best of all possible worlds’, ‘It must be so’, ‘Bon voyage’, ‘What’s the use?’, ‘Life is happiness indeed’, ‘What a day’ and ‘This world’) room to move and make its point. The finale, following all the comic antics, is both beautiful and moving as everybody looks forward, optimistically, to the future in ‘Make our garden grow’. It is genuine emotion that comes through the harmonies of the music and the touching quality of the lyrics.

Apparently Bernstein’s daughters have said that he would have loved this production. It is blessed with a marvellous cast: Toby Spence in the title role is very moving and provides a strong base around which all these extraordinary events happen. The Cunegonde of Anna Christy is a total delight and she manages ‘Glitter and be gay’ with extraordinary panache (historical note: Barbara Cook sang it first). Christy has been in all three presentations of Carsen’s production – and is a terrific asset to the show. Beverley Klein as The Old Lady gives another of her definitive performances (she has previously put her own stamp on Mrs Lovett in “Sweeney Todd”, Golde in “Fiddler on the Roof” and The Witch in “Into the Woods”). Here she looks like Golde Meir in widow’s weeds and at one point a chorus-girl outfit and brings the house down in her relating of how she once lost one of her buttocks but, she explains hilariously, that ‘I am easily assimilated’. As Voltaire, Pangloss and Martin, Alex Jennings exhibits great flair as a song and dance man and he really anchors the production with great force and very good humour.

There is great work too from the rest of the company, doubling up in many roles, and the chorus is excellent while and the dancers superb in Rob Ashford’s spirited choreography. Under Rumon Gamba the orchestra delivers Bernstein’s score with untrammelled delight and excitement. The whole thing is a veritable triumph for all concerned. In the best of all possible worlds this is the definitive “Candide”. The story ends here…