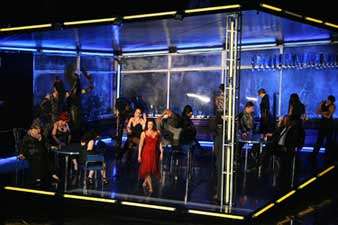 English National Opera has not had a great reputation with its productions of Bizet’s opera. The one set on a car dump was probably the nadir of the company’s attempts to stage the piece with some sort of relevance. Here we are again, however, with what the programme calls “Bizet’s Carmen” but it’s not the “Carmen” we are generally familiar with. I know there have been many ways of looking at the work, and Oscar Hammerstein II’s version in “Carmen Jones” is about the best you can get if you wish to modernise the piece. The recent Southbank Centre production proved that, even though the staging was not suited to the Royal Festival Hall’s space. We have had dance versions, the latest of which, Matthew Bourne’s “The Car Man”, has the sultry temptress changing sex to become an irresistible car mechanic. That’s all right if you know the whole shebang has been altered.

Filmmaker Sally Potter makes her opera directing debut with ENO’s “Carmen”. As a former dancer herself and as a filmmaker, she also includes aspects of these art forms within her production. The dance is understandable – are we supposed to be in Spain, after all? – but the video inserts add little or nothing to a production already overloaded with extras. The designs look handsome enough, or they would in another production, say, of “Sweet Charity”. Gone is the cigarette factory that employs the women workers. Instead in comes what can only be a brothel, with a chorus of ‘working girls’ dabbling in drugs and prostitution. Don José (just José here) is now a security guard and Carmen is just one of the girls. The plot continues as per Bizet’s original but with this setting it is not exactly credible because the backdrop of the bullfight is retained. If you are going to change the scene, why not go the whole hog and make Escamillo a pop singer, a footballer or a flamenco dancer? 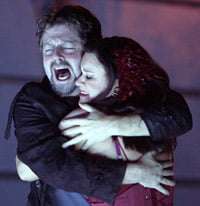 Act Two is no longer a rural tavern but a city bar which allows the company a chance to sleaze up the surroundings with whores and pimps. Throughout the production there is a recurring theme of dance with the excellent Lucila Cionci and Pablo Veron tango-ing their way through the plot but for no discernible reason, unless it is to mirror in dance what is happening in the music itself. In her programme note Potter claims that this opera “has been done and will be done so many times that a potentially radical approach cannot possibly harm it.” Well, have I’ve got news for you, Sally, because this staging doesn’t work at all. It’s a series of scenes that do not flow together into a coherent whole; and there’s no dialogue either. It irritates on the most basic level and never recovers from the divergence from Bizet’s intentions. At least Hammerstein and Matthew Bourne created completely new entities rather than covering the piece with a surface gloss.

That said, musically the piece holds up quite well, the singers are well on form. Despite conductor Edward Gardner’s very slow pacing of the score – the ‘habañera’ threatens to come to a stop – Alice Coote’s Carmen presses all the right buttons vocally although her body language lacks an essential sexual frisson. Julian Gavin’s José sings exceptionally well although his characterisation is a little colourless. Katie van Kooten’s Micaëla sustained her big number and she threatens to get the best-in-the-show award. David Kempster’s Escamillo is full of bravado without toppling over into camp. The Mercedes and Frasquita of Fiona Murphy and Elena Xanthoudakis are a couple of Amy Winehouse lookalikes and add fun to the general melee.

Overall, however, English National Opera has still not produced an ideal staging of Bizet’s “Carmen”. Instead, this is Potter’s “Carmen” – with a vengeance.