Britten
Death in Venice, Op.88 – An opera in two acts; Libretto by Myfanwy Piper based on the short story by Thomas Mann 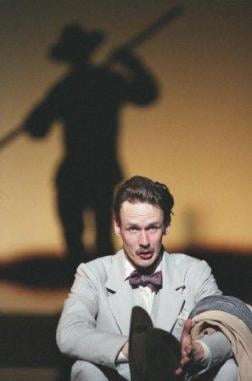 “Marvels unfold”. Thus speaks the Traveller – the first of the ‘fate’ figures who lures Aschenbach to his destruction. A similar thought might well pass through the minds of audience members witnessing the unfolding of this miraculous opera in this splendid and largely credible new production with first-rate performances from the principal cast.

What struck me again – as it does whenever one has the chance to experience Britten’s operatic swansong – is the sheer strength of the composer’s invention. It is impossible to imagine this is the work a man increasingly exhausted and ill. He showed a dogged determination to finish his opera, thereby delaying necessary heart-surgery that perhaps fatally compromised his health. But retrospective biographical speculation should not deter us from appreciating this masterpiece for what it is – a testament to a great composer working at the very height of his powers.

In the role of Gustav von Aschenbach, there can be a temptation to ‘read’ a portrait of the composer, though, unlike Aschenbach at the start of the opera, Britten rarely suffered from a creative ‘block’. But the writer’s pre-occupations with order, discipline – as opposed to their counterparts – and the questioning of his own creative powers were surely some of the traits which drew Britten to create one of the finest operatic characters of the twentieth – or, indeed, any – century.

Aschenbach was Peter Pears’s last operatic assumption and it is perhaps his magisterial and authoritative portrayal that has made productions of “Death in Venice” so few and far between. This is English National Opera’s first staging and, in the last decade or so, I am aware only of two London concert performances. Ian Bostridge attempts the well-nigh impossible – to make a part written for Pears his own – and succeeds brilliantly. I have not always admired Bostridge as much as other commentators have. But, on this occasion, he was quite outstanding, whether in the clear articulation of the text, the apposite delivery of not-always-easy vocal lines, and in suggesting the physical and emotional deterioration of this once proud, upright (uptight?), self-assured and successful novelist. Bostridge has to bear the burden of the opera’s telling. He often ‘confides’ in the audience, reads or writes in his diary, but has little direct interaction with the characters of the drama.

He is most unable to communicate with that which becomes the object of his obsession – the Polish boy Tadzio, who initially impresses Aschenbach with his beauty and poise, but who gradually draws from Aschenbach other, less ‘noble’ emotions. Britten’s brilliant solution to the problem of delineating non-speaking characters was to deploy dancers, accompanied by their own special percussion world, derived from that of the Balinese Gamelan. Although only ‘standard’ orchestral instruments are used, the composer draws from them sounds that are, literally, ‘other-worldly’.

One should comment at this juncture that the percussion music in this performance was often much too loud. The initial vibraphone phrases which spell out Tadzio’s theme were too ‘hard’ in character rather than soft and seductive, as they should surely be and as they are on the composer-supervised Decca recording (conducted by Steuart Bedford). The same applies to the children’s beach-games that took on a rather aggressive character in this interpretation. Benjamin Paul Griffiths and his dancer-friends – rather older than perhaps originally intended – were conceivably more ‘butch’ than boyishly beautiful, but certainly executed Kim Brandstrup’s demanding and intricate choreography with dexterity and conviction. Some criticise the final scene of Act One – ‘The Games of Apollo’, in which Aschenbach imagines himself back in Hellenic times and the boys on the beach become mythical visions of another age – as too long. The authorised cut was made in this production, but the evocative dancing and superb choral singing did not convey a sense of proceedings as being too protracted.

As Aschenbach’s nemesis, Peter Coleman-Wright gave a tour de force in his presentation of the various baritone figures. His Elderly Fop was properly repellent, his Hotel Manager obsequious (with more than a hint of danger in the final scene – “Who comes and goes is my affair, Our work is nearly done”) and the Leader of the Players cynical and downright sinister.

The decision to have Dionysus and Apollo actually visible vying for supremacy over the sleeping Aschenbach did not work terribly effectively in ‘The dream’ – about the only scene about whose staging I have some disappointment. The original scenario intends that Tadzio should be seen participating as part of a Dionysian revel – a polite term for orgy – and Britten’s violent and terrifying music tells us that something dreadful has occurred. Deborah Warner’s production has Tadzio being pursued by a figure looking like the Elderly Fop, whilst the holiday-goers look out to sea. Earlier, Apollo was also present on the beach – though whether the god would appear in slacks and shirt is a moot point. Iestyn Davies sang excellently, however.

The decor and lighting were apt – there were no visual images that jarred; indeed the telling of the story was lucid and sympathetic. I have reservations about the very final scene, however, where the stage direction – meticulously timed with the music – indicates ‘At a clear beckon from Tadzio, Aschenbach slumps in his chair. Tadzio continues his walk far out to sea.’ Both these crucial directives were unfortunately ignored, though the boy’s lithe dancing facing a bright sun was striking to a degree, if not the image intended by the composer.

Edward Gardner was making his debut as ENO’s Music Director and conducted a largely secure performance (one or two offstage hesitations apart). Occasionally, I felt the need for a more relaxed view, though Gardner’s urgency impelled the drama onward. Incidental reservations aside, this fine production cannot be recommended too highly – and Bostridge’s portrayal alone is worth the price of admission.