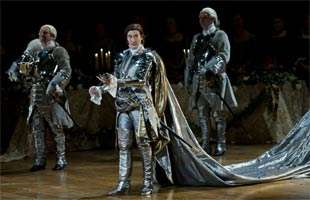 For those who can swallow Der Rosenkavalier whole, like a great gloop of malt and cod-liver oil, this revival of a Scottish Opera production – first seen at English National Opera in 2008 – bids fair to be an excellent proposition.

From the very beginning, when the magnificent ENO orchestra’s horns produced a fair imitation of their whooping Viennese counterparts, one knew that whenever the stage action faltered, compensation could be found in listening to the musicians in the pit. The strings may not quite match some Continental rivals but the violins managed their often high-lying lines with shimmering unanimity.

Edward Gardner must take credit for such orchestral splendour but he must also take a brickbat for not giving Richard Strauss’s admittedly jellyfish-like structures more backbone. For Der Rosenkavalier is a very long opera. Scene after scene goes on just too long for its own good, and if we are not to have some judicious cuts – I would start with some of the annoying rococo pastiche in Act One – a firm hand must be kept on the tiller. The temptation to milk the big Act Three ‘Trio’ was not altogether resisted. 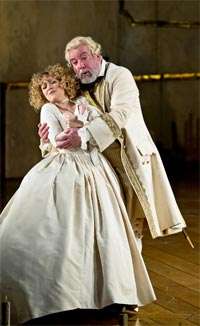 The production, blessedly traditional, is excellent for the most part, with very little of the vulgarity I associate with the name of David McVicar. There are many witty touches, like the by-play with the lighting in Act Three, and if the whole evening can be tightened up a little, the humour will flourish all the more.

The singing on this first night was mixed in quality, the star turns being Sarah Connolly’s Octavian and Sir John Tomlinson’s Ochs – and that, you may well say, is how it should be. Connolly produced consistently lovely tone, especially in the middle register. She is very much a mezzo-soprano Octavian and the only singer here fully capable of shaping Strauss’s arching vocal lines. She also acted well and looked good, apart from a most unconvincing hairstyle.

Tomlinson has long been one of those singers whom I would rather hear ‘live’ than recorded. His black bass, which in some respects takes us back to the days of Robert Radford (how that great man would have relished the role of Ochs!), is still very effective in the theatre, where its strong beat is hardly noticed. He has much fun with the Baron’s boorish behaviour and if he and the conductor can come to an agreement on the question of self-indulgence, this portrayal will be one to savour. It already rivals that of Michael Langdon in richness and ripeness. For a singer fairly well advanced in age, Sir John also moves very nimbly.

Amanda Roocroft, singing her first Marschallin, seemed very tentative at first and did not really command Act One as her character should. She sounded frail as she led off the Act Three ‘Trio’. But in general she gained in both vocal and dramatic confidence, and the role could end up fitting her like a glove.

Sophie Bevan is a most promising Sophie. Occasionally she tries too hard, as if she is afraid that she will not be heard. She should have more confidence in her composer – if Strauss knew about anything, it was the soprano voice – and let her lyric tone soar within its limitations, as Elisabeth Schumann used to do. At her best, as in the ‘Presentation of the Rose’, she is already perfect for her role

Der Rosenkavalier makes huge demands on a company, with its large gallery of character roles. Besides Andrew Shore’s suitably fussy Faninal, I must mention Adrian Thompson as Valzacchi, Madeleine Shaw as Annina, Jennifer Rhys-Davies as the Duenna, Mark Richardson’s Commissar and Gwyn Hughes Jones as the Italian Singer. Geraint Hylton as the Major-domo got a good laugh with his crisp enunciation of ‘riff-raff’.