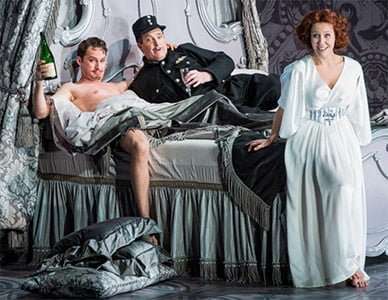 Musing on Die Fledermaus recently, Jeremy Sams, that expert director of froth and comedy, drew parallels with Le nozze di Figaro in the elegance of its class-based frolics. For English National Opera’s new production of the Waltz King’s operetta, Christopher Alden – whose body is not blest with comic bones – has opted instead for Freud. Hey ho.

Die Fledermaus is the lightest of inconsequential tales but you’d never know it. Comedy needs to unfold within a credible context; when characters exist in an abstracted world their behaviour has no meaning and caring for them is not an option. Yet from the opening picture of a sleeping Rosalinde, tossing and turning in bed as she dreams of bats, Alden layers symbol upon surrealism until the flimsy edifice collapses around him. He fails to grasp that though his way-out notions may have flashes of wit they’re rarely funny – and so he kills the show stone dead.

We might expect a dream-play canvas to fire the imagination of a director as habitually imaginative as Alden, but he displays a surprising poverty of ideas and saddles his performers with some dismal stage business. In particular Simon Butteriss, usually a shining talent in this repertoire, is reduced to paper-throwing and leg-shagging in a clueless interpretation of Dr Blind. Poor man – what must he be thinking. Jennifer Holloway’s notably well-acted Prince Orlovsky is similarly undone by direction that presents her as half-spoilt brat, half-deranged proto-Soviet. 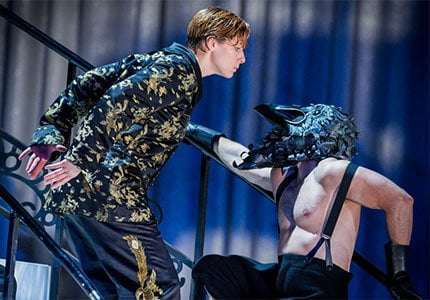 When it comes to filling a busy stage Alden has a fund of inventions, but give him a funny line and he doesn’t know where to start. Such chuckles as there were tended to be occasioned by the deft translation of Stephen Lawless and Daniel Dooner (no one who dares to rhyme “discourse” with “fish course” can be all bad, although it is not clear whether the same team was also responsible for the dead-on-arrival spoken dialogue). By Act Three, Alden seemed to have given up the ghost completely: he cast Frosch the jailer as a Nazi hysteric and let rip with low-rent chaos. It was hard to watch and even harder to listen to, with ham opera-acting of the worst kind afflicting everyone except Butteriss, an abused Andrew Shore (Frank) and the admirable Edgaras Montvidas, whose laconic Alfred was nicely sung and beautifully judged.

Eun Sun Kim conducted breezily enough after a scrappy Overture whose jerky impetus seemed designed to reclaim its familiar strains from the concert hall and give it a theatrical air. It didn’t quite work. She would have been better advised to work on company diction, for neither the chorus nor several of the soloists were anything like as clear as they needed to be. 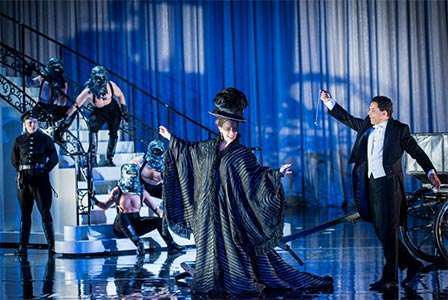 Performances overall were a mixed bag, with Richard Burkhard’s Dr Falke (imagined here as a Freud variant) the pick of the cast for his all-round impact. Julia Sporsén and Rhian Lois projected plenty of warmth as Rosalinde and Adele respectively but neither quite hit the mark with her star aria. The ENO Chorus donned risqué fancy dress, as usual; Tom Randle removed his top, as usual. Everyone worked far too hard to elicit laughs but if any of them were really having fun it didn’t cross the footlights.

Every bit as embarrassing as the staging were the set faces among the audience, stony or rictus according to temperament. Christopher Alden, masterly interpreter of The Makropulos Case for this company, has taken a light-hearted comic operetta and directed the bejesus out of it – dropping the fun-ball on the way. A giant fob watch swayed above the action throughout, but unlike Salvador Dalí’s famous timepieces it didn’t melt. Bludgeoned by the whole experience neither did I.