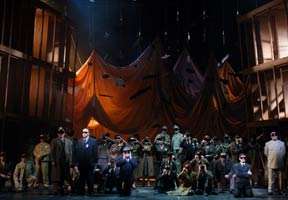 The scientist Leo Szilard left continental Europe (he was a Hungarian Jew) for England in 1933. In that year he attended a meeting at which Lord Rutherford pronounced that nothing would ever come of atomic power. Szilard, being the irascible man he was, took against such dismissive statements – especially when they come from such distinguished colleagues – and set to work on the problem. Apparently, when living at the Strand Palace Hotel in London (he loved hotels), he was walking to work at Bart’s Hospital and was arrested by a red light. Before it had turned to green he realised that if you hit an atom with one neutron and it happens to break-up and release two then you would have a chain reaction. In 1934 he filed a patent which contains the words “chain reaction”. He was terrified of its consequences and wanted to keep it secret. He turned the patent over to the British Admiralty and it was secret until after the end of World War Two.

Believing that war was inevitable, in 1939 Szilard wrote to President Roosevelt (Albert Einstein signed the letter, too) telling him that he must decide what scientists should do about nuclear energy. When, in 1945, the War in Europe was won Szilard realised that The Bomb was going to be used against the Japanese he wrote memorandum after memorandum demanding that it be tested before a Japanese delegation. Someone once remarked in Szilard’s presence that it was the tragedy of scientists that their discoveries are used for destruction. Szilard said that it is “not the tragedy of scientists; it is the tragedy of mankind.” 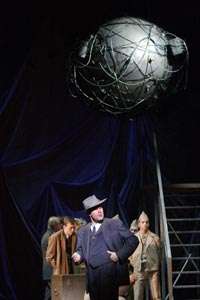 This is the context on which John Adams’s “Doctor Atomic” claims to draw: conflicting emotions and great characters. What a pity this opera has so little of both. Szilard is only mentioned by name (fair enough) in Peter Sellars’s dreadful libretto but the other characters that inhabit the Los Alamos research facility for the Manhattan Project are also amazing people. Edward Teller (1908-2003), known as “the father of the hydrogen bomb”, is considered to be one of the inspirations for Stanley Kubrick’s film of Dr Strangelove! J. Robert Oppenheimer (1904-67) was a very cultured and learned man. He taught himself Sanskrit to that he could read the Bhagavad Gita in its original language. These two historic figures of the twentieth-century come across here as utterly ordinary.

Peter Sellars’s libretto is scientifically literate when attempted and the front-cloth (seen before the opera begins) showed a 1945 periodic table that had a few gaps where undiscovered elements lay, though more research should have been done, for technetium (element number 43) was absent, yet its existence was proved in 1937. Basing an opera on “original sources” may be the Achilles’s heel of Sellars’s libretto for there is a lack of character-drawing. 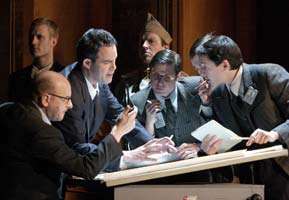 This joint-production is shared between Metropolitan Opera and ENO. It is superb. Opening with numerous scientists in boxes busy working on mathematical formulae it develops to stage the action effectively. There are some inspired moments, too. In one, Oppenheimer recites John Donne’s sonnet “Batter my Heart” whilst standing in a (well-lit) shadow created by The Bomb. Other moments are cack-handed, though: to simulate the climactic explosion the back-lights are turned up to little effect. Why not set every light to maximum? We are told that the detonation (the very end of the opera) is five minutes away. Fifteen minutes later it is two minutes away!

Sellars’s dreary libretto goes from bad to worse in Act Two, with laborious conversations and even less characterisation; it is astonishing that characters’ motivations are not explored in any depth. The opera is therefore a struggle with Sellars’s words, and parts of Adams’s score are plain dull, with little of a vocal line. Making General Groves, the Army officer in overall command of the Manhattan Project, into a caricature – it is made clear that he preferred to do his own weather forecasts and that he kept a meticulous daily diary of his calorific intake – took away from the fact that he chose Oppenheimer to be the lead scientist and that even though their characters were almost opposite, he did have enormous respect for scientists.

However, there are aspects to admire. The setting of the Donne sonnet is one, and Gerald Finley is outstanding; his secure and powerful voice, and presence, commanded attention. As Kitty, Oppenheimer’s wife, Sasha Cooke is afforded wonderful moments, particularly an ecstatic aria for the ‘New World’ when she tries to seduce her husband. As Edward Teller, Brindley Sherratt’s reading of Szilard’s petition was from the heart and captured well a sense of desperation. Jonathan Veira’s portrayal of Groves was limited by the libretto.