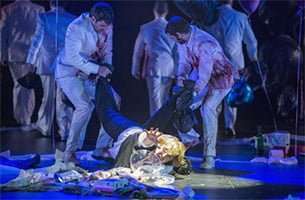 We’re back in Hell’s antechamber for the first revival of Rufus Norris’s production of Don Giovanni (first seen at ENO in November 2010), with a few changes. Gone is all the business with sparking electric cables, and Don Ottavio doesn’t get his kit off – along with, I’m sure, the loss of many other details, which still doesn’t do much to streamline the overall feeling of points being emphatically made, underlining the impact of the music with a carpenter’s pencil. There are three new singers – for Don Ottavio, Donna Elvira (although Sarah Redgwick stepped in at the last moment for the first night in 2010) and Leporello.

Musically, there were plenty of thrills. Edward Gardner beat the hell out of the Overture with a blisteringly pornographic, pumping energy, and the first half-hour or so surged ahead. His conducting elsewhere had a great deal of finesse, the orchestra dug out a lot of detail, and Gardner also gave the recitative its head. 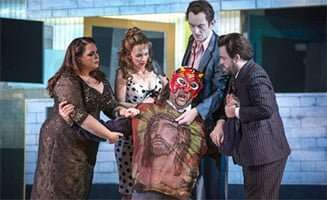 Iain Paterson, looking more seductively svelte than he did in the first run, was on commanding form as the Don, singing often with caressing warmth, and rising heroically to most of the challenges thrown at him by the staging.

The consistently hard timbre of Katherine Broderick’s formidable soprano may not be to everyone’s taste, but it’s a powerful, bright voice that negotiated technical difficulties with ease, although her dramatic sense is a bit two-dimensional. 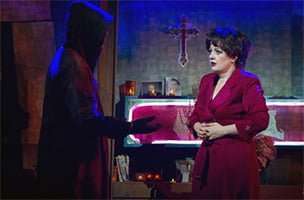 I was sold on the magnificent Donna Elvira of Sarah Redgwick, a terrifyingly neurotic stalker hurling herself at Don Giovanni, with compulsive singing to match. She managed to be both magnetic and repellent, at the same time as engaging our sympathies. Of all the roles, Elvira was directed as the most credible and sinned against.

Norris’s take on Zerlina is broadly traditional, but Sarah Tynan wrung a certain degree of S&M charm out of ‘Batti, batti’ – easy listening, perhaps, while you’re reading Fifty Shades of Grey. She put her soubrette talents to vulnerable effect in her tangles with the Don, and something more complex with Masetto.

As the latter, John Molloy had a good line in petulant macho pride, sang with an engaging fluency and looked pretty sharp in his cheap, shiny grey suit with brown shoes. Don Ottavio only got one aria (‘Dalla sua pace’), gracefully sung by Ben Johnson, but the role slips through the net of Norris’s staging, the more so since he’s not required to do a striptease. Matthew Best’s Commendatore died sonorously, and in the Norris dark psychodrama view of things was spared coming back to life as a statue.

Towards the end, Darren Jeffery sounded strained as Leporello, but had been otherwise in great vocal shape. His comic sense made him the only character to get anywhere near the ‘dramma giocoso’ aspect of the opera, and he ramped up the recitative’s conversational fluency. His highlight – and one of the most memorable things about the production – was the ‘Catalogue’ aria, done as a spreadsheet of month-on-month targets achieved, even surpassed by his master, and sung with sly sex appeal. The other memorable moment of truth was Don Giovanni’s ‘serenade’, in which the exhausted sex addict sings to an ideal of love and intimacy he’ll never achieve. Bieito, in his infinitely more abandoned ENO staging, did something similar when the Don used the serenade for a bit of soulless phone sex.

The staging, with the set of bits of anonymous buildings and interiors handled by demon-masked stagehands, was exhilarating in the first Act, but despite all the frantic activity, visual bling (including some great projections) and things like horned demons hovering silently, you felt that Norris had shot his bolt, confirmed in the second Act, which became just overloaded. He makes the point about the emptiness of addiction and a greed-is-good style of casual consumerism (the look is 1970s/80s) early on and leaves himself with nowhere to go, so for the most part characters become marooned as ciphers.

Musical standards are very high, with gripping finales and tight ensemble casting, and there are many delights in Jeremy Sams’s reworking of the libretto, but the staging and grungy designs are a case of easy come, easy go.