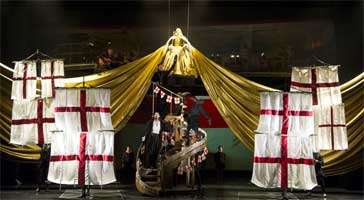 English National Opera’s final production of the current season, Dr Dee takes its place in a lengthy of line of stage-works by those looking to blur the supposed boundaries between popular and art music.

With as varied a CV as almost any pop musician of his generation, Damon Albarn might seem ideally placed to have met the challenge; indeed, his earlier theatre piece, Monkey: Journey to the West, was nothing if not an impressive spectacle – even if, stripped of its visual allure, the music was mostly little more than watered-down Philip Glass of an essentially accompanimental nature.

For its successor, Albarn and his “co-creator” Rufus Norris have alighted on John Dee – the sixteenth-century polymath who was also the subject of an opera by John Harle, Angel Magick, which met with a distinctly equivocal response at the 1997 Proms. There seems little likelihood of that being the case here – yet it has to be said that Dr Dee, for all that it may touch upon a range of present-day theatrical issues, is far from being a success in either dramatic or, more particularly, musical terms.

With its two acts of roughly 55 and 40 minutes respectively, the work centres on the heady rise and fall of Dee as he establishes himself as a favourite at the court of the newly acceded Elizabeth I, only to fritter away both his reputation and wealth in pursuit of his ultimate ambition – to decipher the perceived language of the Angels. 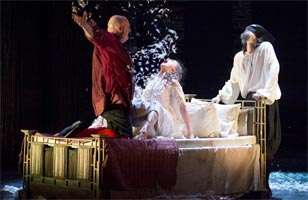 Although it features a cast of vocal protagonists and orchestra, this scenario is played out essentially in terms of a sequence of songs as performed by Albarn with guitar and joined by an eleven-piece ensemble of distinctly Renaissance complexion with its array of lutes, theorbos, woodwind and keyboards. Norris has set this in a gallery running along the top of the stage, and in a manner that recalls similar visual conceits in the earlier films of Peter Greenaway, while its music – propelled at times by muscular percussion from Tony Allen – is equally redolent of those pastiche soundtracks by Michael Nyman which caused a stir two decades and more ago, but that (as with the Greenaway films for which they were intended) now sound irrevocably of their time.

Which aspect is true of Norris’s contribution as a whole. This is a curious bringing together of stock Elizabethan imagery – hence the archetypal court and domestic settings – with a few unexpected if far from revelatory touches (the silhouetted love scene in Act One has an appealingly English coyness) and a number of in-house gestures, not least the emergence of scrawled writing against a gauze curtain, such as have been rather done to death in ENO productions over recent seasons. 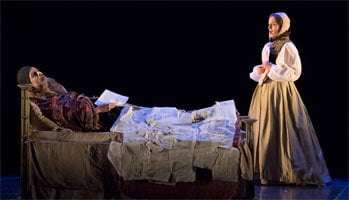 Nothing to enthuse about or decry – while abetted by Paul Atkinson’s ‘in-period’ set designs, Katrina Lindsay’s tasteful costumes and Paule Constable’s effective lighting – it amounts to at-best a superficially effective and at-worst a drearily predictable staging that leaves little impression as it unfolds. Only with the evocation of the Angels and their overcoming of Dee’s then-rational demeanour does it tap into a more expansive and involving dimension, though this proves as short-lived temporally as it feels reined-in theatrically: an opportunity to push the dramatic envelope which is unfortunately muffed.

Albarn’s music, or at least its song component, has already been made available as an album (on the Parlophone label) and this staged incarnation confirms an occasionally affecting though more often anodyne response to its subject that suffers from a lack of dramatic pacing as well as a surprisingly restricted approach where the singer’s self-conscious ‘mockney’ is barely enhanced by his minimal guitar playing. While the ensemble fills out the texture with its often-evocative writing, the much stylised nature of its content tends to work against more vital or engaging expression. More worryingly, the role of the orchestra – for all the attentive conducting of Stephen Higgins – is little more than the live equivalent of overdubs on a studio recording; providing a discreet and incisive support that largely fails, not least at climactic junctures, to justify its presence. Albarn remains an ambivalent figure – much praised by various quarters for his ability to connect with and harness a range of cultural influences yet too often unable to fashion a distinctive, let alone personal synthesis.

Among the vocalists, Paul Hilton has the presence and agility to project the title-role in all of its reckless bearing, Anna Dennis is quietly eloquent as his daughter Katherine and Clemmie Sveaas is hardly less telling as his long-suffering wife Jane. Steven Page is a thoughtful and increasingly ominous Walsingham, Melanie Pappenheim an eye- as well as ear-catching Elizabeth and Christopher Robson (a veteran of many notable ENO productions over the past three decades) invariably steals the show in his twin guises as the Bishop and the ever-more-desperate medium Edward Kelley.

All the more pity, then, that their contributions are often little other than glosses on the production rather than being integral to it – reinforcing the overall impression that Dr Dee the opera is, for the most part, little more than the indifferent collection of songs at its core. As the (real) ravens return to the empty stage following Dee’s pitiful demise, in what is a pertinent framing device, the abiding feeling is disappointment that this was the best Norris and, moreover, Albarn have to offer.