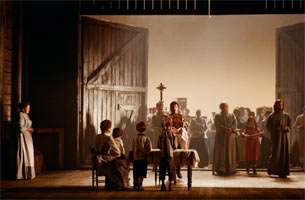 Deborah Warner’s new production (with Metropolitan Opera, New York) for English National Opera of Eugene Onegin is every bit as traditional and faithful to its early-nineteenth-century period as the one it replaces. Huge projections announce each of the seven scenes, with images of the Russian countryside, St Petersburg and, very importantly, the change of seasons providing instant access to the Russian soul. At first it seemed that the staging would be rather lumbered by having the first three scenes (the whole of Act One) set in a very big, very realistic barn. It was fine for Scene 1, needed more justification for Tatyana’s bedroom – although the arrival of dawn was beautifully staged – and by the third, when Onegin returns the fateful letter, you wondered if Tatyana ever left the place.

The direction and look of the opening is wonderful. The grouping of Madame Larina and the nurse and of Tatyana and Olga made crystal-clear the sad-but-true triumph of experience over hope, the realities of ageing and making-do and the comfort of memories against youth’s flighty, romantic dreams. It’s an inspired bit of staging to make the gathering-in of the harvest a religious procession, with priests, banners and icons, although the choreography for the brief ‘Rite of Autumn’ is self-consciously arty. The sets for the Larina party, the duel and the St Petersburg ball are very evocative, the grandeur of the latter set, a colonnade on a reflective floor, drawing applause. It’s a thoroughly observed picture with always something to look at. 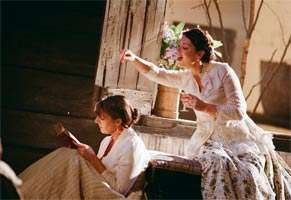 Amanda Echalaz has been a terrific Tosca (for ENO and Holland Park). As Tatyana she looked endearingly gauche, but her big voice with its powerful top register didn’t conjure up much in the way of dreamy, adolescent introspection. She was very moving in the ‘Letter Scene’, although too commanding and large-scale, but in the end she didn’t entirely convince as a girl blown away by the intensity of her attraction for Onegin. She was much more at home with the more mature Tatyana of Act Three (although, even then, she‘d have been at the most in her early twenties), with some grandstanding passions to give vent to. 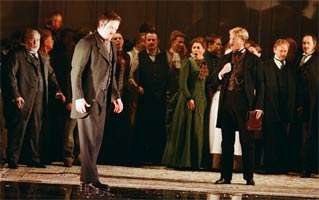 At first the Norwegian baritone Audun Iversen’s Onegin seemed too anonymous, but he grew into the part as you realised that he was acting, extremely well, a young man not entirely confident at being an adult. Hence the overplayed self-importance, the drinking (his surreptitious helping himself to a refill in Scene 1 was a nice touch), and his patronising humiliation of Tatyana – again, his arrogant god’s-gift-to-women long, forced kiss before he discards her was shockingly probable, as was Tatyana’s final miserable embrace before she abandons him. Iversen makes Onegin satisfyingly insecure and supercilious; he sang beautifully and was compelling as the drunken empty husk of a man in Act Three.

In an opera that celebrates, if that’s the word, missed opportunities, Deborah Warner makes quite a thing out of embraces, to devastating tear-jerking effect in the ‘Duel’, when Onegin and Lenksy shake hands and embrace before drawing their pistols (only one shot is fired), and, even more heart-rending, when Onegin cradles the dead Lensky in his arms. Toby Spence was engagingly ardent as the latter, if not as inside the Russian idiom as Iversen, serenading Olga in Scene 1 with some ravishing singing and also soaringly poetic in the ‘Soliloquy’.

Claudia Huckle’s thrilling, full contralto made Olga a more-than-usually effective foil to Tatyana. It doesn’t matter, but Pushkin describes her as flaxen-haired, and most of the productions of Onegin I’ve seen make her blonde, which is quite useful for telling the sisters apart at the opening. She was nicely fickle in the party scene. The smaller roles are all well cast, in particular Diana Montague’s sympathetic Madame Larina, a very touching Triquet from Adrian Thompson (a great Lensky in his time) and an equally fine Prince Gremin from Brindley Sherratt. The big ensemble scenes are effectively managed, although the choreography for the ‘Polonaise’ is unrealistically fancy. Edward Gardner’s conducting, the superb playing and choral singing, full of the surging, symphonic passion we expect from Tchaikovsky, clinches this beautifully staged and sung production, one that makes you fall in love with this wonderful opera all over again. ENO has really pulled the stops out.