Gilbert & Sullivan
The Pirates of Penzance, or The Slave of Duty – Comic Opera in Two Acts; libretto by W. S. Gilbert with music by Sir Arthur Sullivan [with English surtitles] 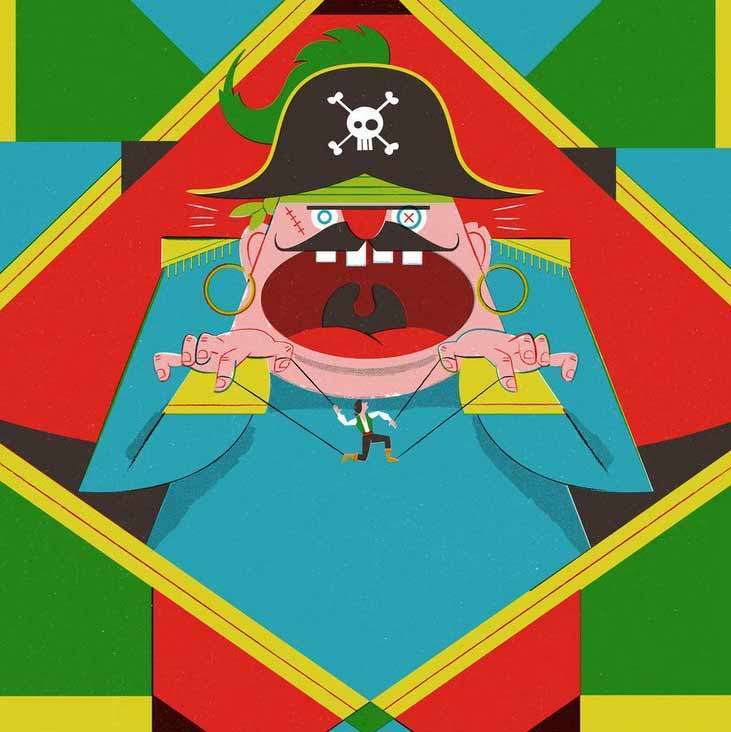 Belying the colourful cartoon advertising campaign (and, indeed, programme cover) – with its scarred, wide-eyed, open-mouthed with tonsils showing a pirate manipulating poor Frederic as if a puppet – Mike Leigh’s first foray into opera-directing is, rather, a tasteful, classy affair and an enjoyable evening at the London Coliseum.

As befits a man who has immortalised Gilbert & Sullivan on screen (courtesy of Jim Broadbent and Allan Corduner) in Topsy-Turvy, Mike Leigh knows his G&S, and provides an informative and intriguing article in the programme. His is a respectful, but not slavish production of The Pirates of Penzance, traditionally costumed but backed by Alison Chitty’s stylised settings – mostly dominated by a huge, dark, cut-out circle that can move laterally across the stage, and through which in the first scene the pirates’ ship-deck swivels at a precipitous rake.

The circle can split to offer more-open stage space, as in the second scene where Major-General Stanley’s daughters enter down steep green staircases (I first thought they were escalators). In the second, nocturnal Act, another cut-out circle divides the stage into three, affording Leigh a trio of planes which he uses very effectively in the climax. Here pirates, policemen and Stanley’s daughters (in their nightgowns) collide, with the reluctant Cornish coppers cowering off the edge of the back circle, while the pirates have the girls captured, spilling out between the two circles onto the front stage. 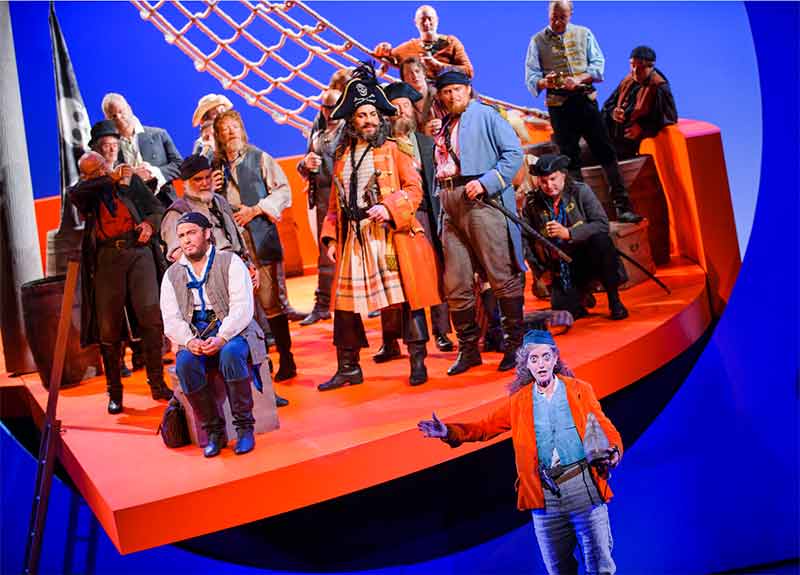 I really liked these designs, clearing away the painted cloths that typify the ‘traditional’ G&S production. Instead, the three front-cloths are used wittily with an ornithological motif – a gull to start, a macaw to end the first Act and, appropriately at the start of the second, a barn-owl to indicate night.

While Leigh doesn’t reinvent the work as Joseph Papp did in his Broadway version, or Jonathan Miller did in The Mikado, or in Sasha Regan’s all-male Pirates, he directs the action with an expert eye so that, even in Gilbert’s topsy-turvydom, the characters seem real. That’s where the humour is – as the situation spins out of control for poor Frederic.

Indentured to be a pirate, instead of a pilot, until his 21st-birthday, Frederic’s hopes of love are dashed when it’s revealed – a paradox indeed – that he was born on 29 February – and his significant birthday won’t be until 1940. But there is always hope, as Mabel says she’ll wait for him… But the subtitle – The Slave of Duty – is doubly important; Frederic is obliged to return to the pirates for the full term of his agreement and Stanley is so distraught he escaped the pirates by lying that he was an orphan he spends sleepless nights at the tomb of his ancestors (well, the ancestors of the mansion he bought the previous year…). Perhaps most important is Gilbert’s final jibe, where the (now-reformed) pirates are revealed as quondam noblemen and are returned to their seats in the Lords. The Establishment and privilege will win out – things have not changed so different nearly 140 years later. Gilbert would surely be amused at that. 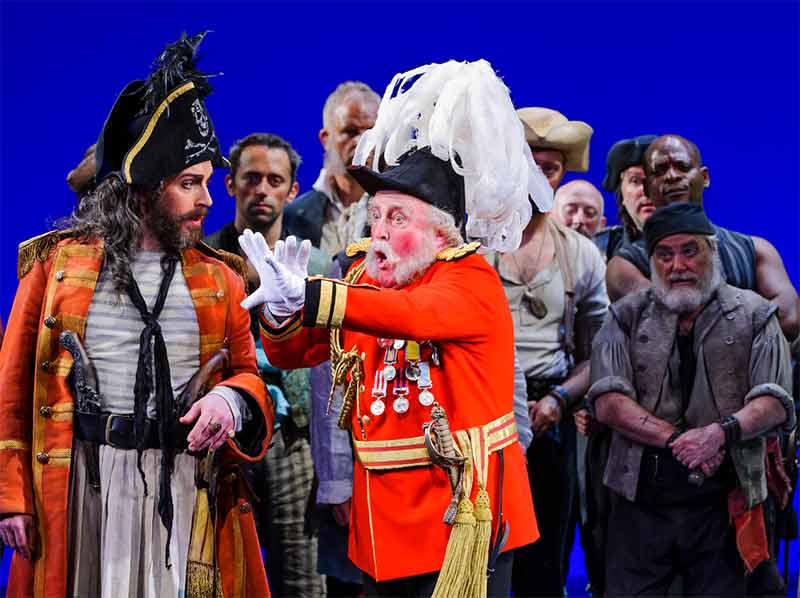 Leigh doesn’t force the humour and he has an excellent cast, which intriguingly are most, if not all, in some sense debutants. Even ENO stalwarts Rebecca de Pont Davies and Andrew Shore are new to their roles of respectively Ruth and Stanley, while new to ENO and their roles are Joshua Bloom, Claudia Boyle and, as her sisters, Soraya Mafi, Angharad Lyddon and Lydia Marchione. Alexander Robin Baker makes his first appearance as Samuel, as Jonathan Lemalu does as the Sergeant of Police.

And David Parry seems not to have conducted Pirates before, and he is arguably the star of the show, with the ENO Orchestra, collectively investing Sullivan’s score with the purpose and conviction that it deserves. First-night nerves probably explain a couple of mismatches between pit and stage (Shore’s second verse of ‘I am the very model of a modern major general’ started to race away), but nonetheless the commitment from the players definitely deserved the biggest cheer of the night.

Shore, in a typically busy and rounded performance, bravely managed to outshine the fearsome feathers of his major-general’s helmet in the first Act, while Bloom utilised his larger than life boom of a voice as the Pirate King. Together with Rebecca du Pont Davies’s limping Ruth, Bloom’s best number was the second Act trio with Frederic ‘A most ingenious paradox’ as his predicament is outlined and he’s forced back to piracy. Lemalu adopts an appropriate south-western burr for the policemen’s two great numbers: ‘When the foeman bares his steel (Ta-ran-ta-ra)’ and A policeman’s lot is not a happy one’ (the later slowing a little too indulgently) and, thankfully, Keystone Kops shenanigans are kept at bay as the men in blue plod around the Major and his assembled daughters. Perhaps best of all is Claudia Boyle’s spunky Mabel, bright and clear and more than a match for any Pirate King. Frederic is a very lucky boy…

Leigh presents a concoction that rescues his beloved Gilbert from the twee productions of yore, and is matched by Parry’s similar service to Sullivan. And for those that need help with the Major General’s references in his most famous patter song, there is a glossary section in the programme. The partial surtitles (some recitatives and all spoken lines are left out) prove useful, although on the whole diction was good.

While unlikely to emulate The Mikado in becoming a staple of ENO for 29 years (counting its scheduled revival next season), I wish The Pirates of Penzance long service at the Coliseum. It will look splendid on the cinema screen on May 19 and will be worth a listen on BBC Radio 3 on June 29; and for those that want to catch it live, two performances have been added to the schedule.

Or catch it in Luxembourg or Germany (this is a co-production with Les Théâtres de la Ville de Luxembourg and the Saarländische Staatstheater Saarbrücken), which explains the European Union grant.