Members of the Orchestra of English National Opera
Christian Curnyn 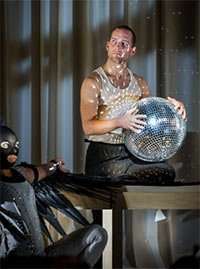 Michael Keegan-Dolan and his Fabulous Beast Dance Theatre have supplied the dance element for previous ENO productions. In Handel’s epic love story of Caesar and Cleopatra, with its sequence of show-stopping arias, he’s gone a step further by tailoring his staging throughout to the needs of dance. The set, which probably uses only half the depth of the Coliseum stage, is a curved wall of plain chipboard, with a studio-like performing area in front that has the advantage of projecting the singers and displaying the dancers, all of them dressed in contemporary clothes. Compared with ENO’s majestic Julius Caesar from the 1980s and the even more glamorous Giulio Cesare from Glyndebourne, this is by no means a lavish staging.

There are, though, a lot of props. Apart from a couple of long tables-cum-dance platforms, some folding chairs and a dead tree, a great deal depends on the huge deceased crocodile, which is the first thing you see as you enter the auditorium, and later a giraffe that is no more. As though to assert his opera-directing credentials, Keegan-Dolan has slapped on the symbolism with a trowel – the croc equals Egypt annexed by Rome; and with a nod to contemporary PC eco-concerns, the giraffe suggests the rape of the Dark Continent by the wicked West, all of this subverted by the sibling rivalry between Cleopatra and her batty, power-crazed brother Ptolemy. 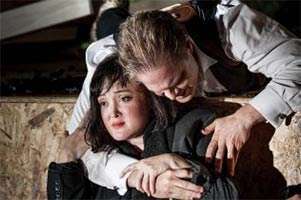 In her opening aria, Cleopatra is required to gouge eggs from the entrails of the crocodile, presumably saving them for the future fertility of her kingdom, but Ptolemy destroys them. In his famous hunting aria, Caesar is dressed as a 1940s’ big-game hunter, with the peaceful giraffe his trophy. There was an awful lot more along these lines, and that was before you got to the dance, which really defines this staging.

To that end, Keegan-Dolan and conductor Christian Curnyn have jettisoned great swathes of recitative – along with a substantial handful of arias – and the choreography is there not just as commentary-in-movement but also as an alter ego to the arias, extending their emotional reach. In Act One, it all seemed too much, an upmarket tune-and-toe show, which, in particular, didn’t adequately explain the already complicated Cornelia/Sesto strand of the plot – Cornelia, widow of Pompey (whose head is presented to Caesar at the start of the opera, and which initiates a severed-head theme) has to fend off Ptolemy and his no-less devious general Achillas, with her son Sesto (a soprano role, here pointlessly recast as her daughter Sesto) out to avenge his/now her father’s murder. Also, there was no following the logic of which arias were and weren’t enhanced by choreography. 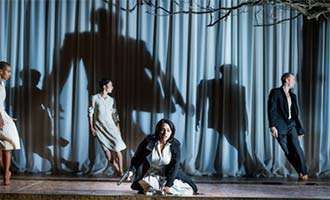 Either things clarified in the next two Acts, or resistance to this overload became futile. The dance began to complement the drama, without the loss of tension and focus on the music that had beset Act One. Directors have long tied themselves up in knots in Baroque Opera over how to jiff up stretches of dramatically static da capo arias, but here the ballet became discreetly and attractively integral, despite a lot of repressive stuff with the dancers required to wear stockings pulled over their heads and being dressed as vultures (the ancient Egyptian symbol of protection), looking like so much reanimated road-kill. It was also definitely not camp or played for laughs (but there were some), charges you could hardly credit the Glyndebourne staging with.

The singing was very good. Countertenor groupies should be well pleased with Lawrence Zazzo and Tim Mead, both of them with awesome, Coliseum-filling voices. Zazzo sails evenly through his range with thrilling energy and brilliance, and he had all Caesar’s swaggering glamour. Mead was just as exciting as the psychotic Ptolemy, and they both sung with stunning virtuosity. The Cornelia-Sesto plot-within-a-plot is substantial enough to merit its own opera seria, and Patricia Bardon’s eloquent mezzo gave even more substance to Cornelia’s tragedy. Despite the sex-change, Daniela Mack was an impressive Sesto, especially so in Act Three. Andrew Craig Brown only got to sing one of Achillas’s arias, which was our loss, because both he and his voice made quite an impact, as did George Humphreys’s assured performance in the smaller role of Curio. The third countertenor, James Laing, was unfortunately denied Nirenus’s cracker of an aria. You couldn’t fault Anna Christy’s fluent agility and control, but the unvaried soubrettish timbre of her voice didn’t register Cleopatra as femme fatale with any consistency, compounded by being directed as rather passive.

As part of the paring-down process, Curnyn’s spirited conducting forged ahead, sometimes to the detriment of vocal ensemble but to the benefit of the dancers – opera conducting and dance conducting are very different. The delights of Handel’s orchestration were there if you listened hard enough.