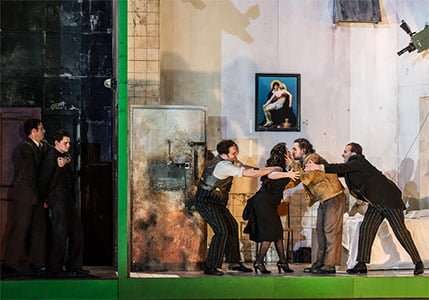 Rodelinda (1725) is commonly reckoned to be amongst Handel’s finest operas. Following immediately after Giulio Cesare and Tamerlano, the composer attained one of the peaks of his musical-dramatic skills with a succession of choice numbers which make up for the comparatively commonplace plot, dealing with tyranny, love and constancy.

Richard Jones’s new production brings the action into 20th-century Italy with a group of characters who seem to behave as little more than gangsters, even though, ostensibly, they reside at the pinnacle of political power in the kingdom of Lombardy. For much of the opera the stage is divided into two rooms, one the realm of Grimoaldo and his machinations, the other a grim prison cell wherein Rodelinda, Bertarido and their son Flavio all languish at some point or other.

Great significance is placed upon the human image, both as the projection of power and desire (in the case of Grimoaldo’s and Rodelinda’s pictures in the former’s study) and as the means of memory (with many reproductions of Bertarido’s face in Rodelinda’s cell). Surveillance cameras also transmit video footage from the cell to facilitate Grimoaldo’s tyrannical hold upon power. He has usurped the throne of Bertarido and Rodelinda, and now seeks to wed the latter.

Connected with the notion of image as the external projection of authority, tattoos are branded on certain characters, demonstrating the real inward and emotional influence some people hold over others. We first see Rodelinda’s name being inscribed on Grimoaldo’s back, and then Grimoaldo’s is seen on Ediuge’s (who is betrothed to him and remains in love with him or, more probably, his position). Rodelinda’s name is also seen on the forearm of Bertarido’s statue atop the colossal monument set up in his memory – another video projection (such a device seems to be all the rage in theatres) reveals this as the audience can only see the memorial’s pedestal. A good idea is taken too far later on when Bertarido’s name is also glimpsed on his servant, Unulfo. 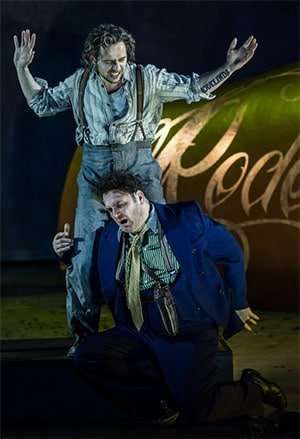 So it is that control and sexual love seem to be inextricably and confusedly bound together in this interpretation. However, no feelings of devotion appear to motivate Garibaldo (who only proposes to Bertarido’s sister Eduige so as to get closer to the throne himself) or the non-musical part of Flavio. Richard Burkhard and Matt Casey relished their mimed enactments of the possible means of execution which they anticipate will befall, respectively, Garibaldo in Act One and Bertarido in Act Three. Their acting could not be faulted but as a dramatic device it was rather a disturbance to the music. Furthermore, Flavio’s attempted assault or murder of Grimoaldo in the final chorus runs counter to Handel’s happy ending where the latter is reconciled to Bertarido.

Another distracting feature is the use of three treadmills at the front of the stage. Characters variously trudge along them either as the playthings of destiny, or purposefully at other times as the master of it. A useful extension of this idea came during Act Two’s final duet (‘Io t’abbraccio’ in the original Italian) where the two parts of the set, with Bertarido and Rodelinda in one each, are pulled away and those characters forced to submit to fate entirely passively. This action seemed to make up for the musically cautious reading of this famous aria.

That aside, the musical dimension was much more consistently satisfying. Christian Curnyn set an unfailingly ideal pace in the pit and secured finely nuanced playing from the authentic-leaning ensemble of ENO Orchestra members, which was rarely lost in the sizeable auditorium (however much Frank Matcham’s neo-Baroque design of The Coliseum is otherwise not so far removed from Handel’s world).

Rebecca Evans showed Rodelinda as a woman more than capable of asserting her rank and getting the better of Grimoaldo, as well as combining great tenderness in her expressions of fidelity to Bertarido, for instance in the ravishing ‘Ritorna, oh caro’. Iestyn Davies was rightly well received for his musically affecting account of Bertarido. On the whole this is not a character motivated by revenge or violence, and Davies’s pure vocal sonority reflected that. A little more mettle would have been ideal for ‘Confusa si miri’ at the end of Act One where Bertarido (wrongly) berates Rodelinda for what he believes is her faithless acquiescing to Grimoaldo’s proposal of marriage, but there was a sufficient degree of triumph in Act Three’s great aria ‘Vivi tiranno’.

John Mark Ainsley was a wily Grimoaldo – though not so much as Richard Burkhard’s suavely devious Garibaldo. Ainsley also brought some humanity to bear on his characterisation, as for instance in the clear enjoyment of love’s stranglehold over him in Act One, and his longing for a life free from political burdens in Act Three. Vocally Christopher Ainslie may have been somewhat slight as Unulfo, but his singing was certainly melodious and captured the deferential, ingenuous character of the role. Both coquettish and determined as Eduige, Susan Bickley provided just the right amount of vocal allure so as not to upstage Rodelinda.

As a whole then, this production is a mixed experience, but it is worth seeing, even if only for the music, as it has been some years since Rodelinda has been professionally mounted in London.