Skip to content
LnRiLWNvbnRhaW5lcltkYXRhLXRvb2xzZXQtYmxvY2tzLWNvbnRhaW5lcj0iNmIzNDMzNmNmZTc3NWZiNGJlMTVjMmIwMzU3NWM1MjYiXSB7IHBhZGRpbmc6IDI1cHg7Ym94LXNoYWRvdzogNXB4IDVweCAxMHB4IDAgcmdiYSggMCwgMCwgMCwgMC41ICk7Ym9yZGVyOiAycHggZG90dGVkIHJnYmEoIDEwOSwgMTA4LCAxMDgsIDEgKTsgfSAudGItZmllbGRbZGF0YS10b29sc2V0LWJsb2Nrcy1maWVsZD0iODM3Y2ExZjc0MGRjZDdkOTdlMzQzOWMyYjIwMWZmZTMiXSB7IGJhY2tncm91bmQtY29sb3I6IHJnYmEoIDIzOCwgMjM4LCAyMzgsIDEgKTtwYWRkaW5nLXRvcDogMTBweDtwYWRkaW5nLWJvdHRvbTogMTBweDtwYWRkaW5nLWxlZnQ6IDEwcHg7IH0g
LnRiLWNvbnRhaW5lcltkYXRhLXRvb2xzZXQtYmxvY2tzLWNvbnRhaW5lcj0iNmIzNDMzNmNmZTc3NWZiNGJlMTVjMmIwMzU3NWM1MjYiXSB7IHBhZGRpbmc6IDI1cHg7Ym94LXNoYWRvdzogNXB4IDVweCAxMHB4IDAgcmdiYSggMCwgMCwgMCwgMC41ICk7Ym9yZGVyOiAycHggZG90dGVkIHJnYmEoIDEwOSwgMTA4LCAxMDgsIDEgKTsgfSAudGItZmllbGRbZGF0YS10b29sc2V0LWJsb2Nrcy1maWVsZD0iODM3Y2ExZjc0MGRjZDdkOTdlMzQzOWMyYjIwMWZmZTMiXSB7IGJhY2tncm91bmQtY29sb3I6IHJnYmEoIDIzOCwgMjM4LCAyMzgsIDEgKTtwYWRkaW5nLXRvcDogMTBweDtwYWRkaW5nLWJvdHRvbTogMTBweDtwYWRkaW5nLWxlZnQ6IDEwcHg7IH0g
Mozart
Idomeneo, re di Creta ossia Ilia e Idamante, K366 [1786 Vienna Version] – Dramma per musica in three acts to a libretto by Giambattista Varesco adapted from a French text by Antoine Danchet [sung in an English translation based on a version by Amanda Holden, with English surtitles]
LnRiLWNvbnRhaW5lcltkYXRhLXRvb2xzZXQtYmxvY2tzLWNvbnRhaW5lcj0iNmIzNDMzNmNmZTc3NWZiNGJlMTVjMmIwMzU3NWM1MjYiXSB7IHBhZGRpbmc6IDI1cHg7Ym94LXNoYWRvdzogNXB4IDVweCAxMHB4IDAgcmdiYSggMCwgMCwgMCwgMC41ICk7Ym9yZGVyOiAycHggZG90dGVkIHJnYmEoIDEwOSwgMTA4LCAxMDgsIDEgKTsgfSAudGItZmllbGRbZGF0YS10b29sc2V0LWJsb2Nrcy1maWVsZD0iODM3Y2ExZjc0MGRjZDdkOTdlMzQzOWMyYjIwMWZmZTMiXSB7IGJhY2tncm91bmQtY29sb3I6IHJnYmEoIDIzOCwgMjM4LCAyMzgsIDEgKTtwYWRkaW5nLXRvcDogMTBweDtwYWRkaW5nLWJvdHRvbTogMTBweDtwYWRkaW5nLWxlZnQ6IDEwcHg7IH0g 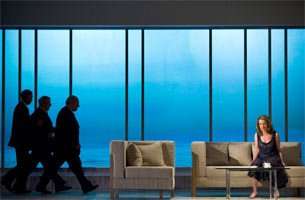 “Idomeneo” was last staged by English National Opera (or, as it was then called, Sadler’s Wells Opera) in 1962, and that was London’s first fully professional production; the UK premiere was in Glasgow in 1934, an amateur offering, so it was left to Glyndebourne to give “Idomeneo” its professional debut in 1951. The US premiere had been at Tanglewood in 1947. A bizarre history for what is a great opera with plenty of opportunities for singers, directors and musicians; of all his operas, Mozart never created such a rich orchestral part as he did for “Idomeneo”. Of course, there’s thirty minutes of ballet music, too (excluded by ENO).On this showing, “Idomeneo” ought to be a frequent returner. With a few caveats, ENO’s production is a triumph, and its three-hour duration breezed by with evocative sets, powerful singing and a surging orchestra, all which put wind into the sails to keep the drama on the move. Although composed long before, the story of “Idomeneo” takes over roughly from where Richard Strauss’s “Elektra” finishes. In Strauss’s opera the daughter of Agamemnon, in a crazed outpouring, murders her mother Klytemnestra and her mother’s lover Aegisthus, both of them having murdered Agamemnon. For Mozart, Elettra (English: Electra) survives that, and is then taken to Crete, where she finds herself with the Trojan Princess Ilia. 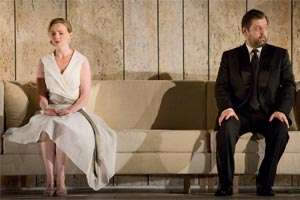 Katie Mitchell’s staging does not seek to analyse the characters’ inner thoughts and motivations too much, so in this respect, it fell short. But the sets (modern apartments and a rocky sea-shore) were well thought-out and presented, and some effects, especially video projections of the sea and storms, are realistic. The opening scene (a room in the royal palace on Crete) has Ilia seated with lots of people coming and going, war and their lost King occupying the population, but all these people walking back and forth were a frustrating distraction.The striving for stormy drama did mean that the heart of the opera was sacrificed. Many tender moments – this is mostly an opera about love, and how it ultimately triumphs over even the curse of a god – passed-by without due care, and it being sung in English meant that truly beautiful singing was absent (gone are the Italian vowels and words that Mozart set); Ilia’s opening lament, where her inner conflict of loyalty to the Trojans and love for Idamante fights itself, was brutalised. However, Sarah Tynan, went on to deliver a richly expressive account. Her Act Two aria, in which she asks Idomeneo to be a daughter of Crete, blossomed exquisitely. 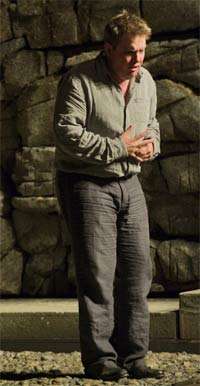 The man she loves is Idamante, Idomeneo’s son. In this Vienna version he was sung by a tenor (in the Munich version the role is taken by a soprano), Robert Murray, who bears more than a passing resemblance to his character’s father, Paul Nilon. The moment when Idamante finds his father (who then rejects him because he realises that he is now cursed) had Murray expressing despair and consternation in equal measure. Nilon’s Idomeneo was most powerfully sung, and he displayed rich texture as well as stamina. The emotional turmoil he feels at, as he sees it, the doomed love of Idamante and Ilia, allowed him to show off his vocal prowess, often with embellishments. This father-and-son pairing was inspired, the frequent mournful encounters gripping. 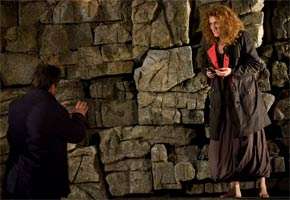 Electra, happy at anyone’s despair, just wants Idamante for herself, and her vicious, crazy nature was ably realised by Emma Bell. Her high notes in ‘Idol mio, se ritroso’ were in response to a waiter massaging her foot in just the right way, she made this aria sensual and powerfully erotic – Bell’s is a malleable and seductive voice, ideal in this part. Electra, portrayed as a libidinous drunk, clearly bonkers, provided a (mistakenly?) comic moment towards the end: as Idamante is destined to die because of Poseidon’s curse Ilia interrupts and offers herself. Electra pleads that everyone must listen to her! Her constant singing about the Furies made her as mad as Hofmannsthal and Strauss did later.Adam Green’s Arbace (confidant of Idomeneo) made his presence felt, even though he gets only a few lines, and the chorus, its voices are mostly heard in tender, almost religious tones, was attractive in the quiet moments. The end of the opera foreshadows Verdi’s greatest opera “Don Carlos”, with the Voice of Poseidon (a penetrating Pauls Putninš) settling everything with just a few words by proclaiming Idamante and Ilia rulers of Crete.As has been a common feature these past few seasons, the Orchestra of ENO under Edward Gardner was on fantastic form. He drove the drama forward continuously, taking delight in Mozart’s typically detailed orchestration as well as revelling in the stormy moments. The Overture heralded aptly the tempestuous opera that was to follow. It was a surging, somewhat aggressive account that was cut through with majesty. Throughout the opera, Gardner’s handling of the dramatic aspects of the score was confident, and his singers clearly found his pacing and direction sympathetic to what they, and the opera, needed.This new production of “Idomeneo” is highly recommended. It looks and sounds great, and treats the subjects seriously. It is what dramatic opera should be: fine singing, strong orchestral contributions and a staging that shows some understanding of the characters.