John Adams
The Gospel According to the Other Mary – A Passion Oratorio in two Acts to a libretto by Peter Sellars based on Old and New Testament sources and with texts by Dorothy Day, Louise Erdrich, Primo Levi, Rosario Castellanos, June Jordan, Hildegard von Bingen and Rubén Darío [sung in English, Latin and Spanish, with English surtitles; world stage premiere] 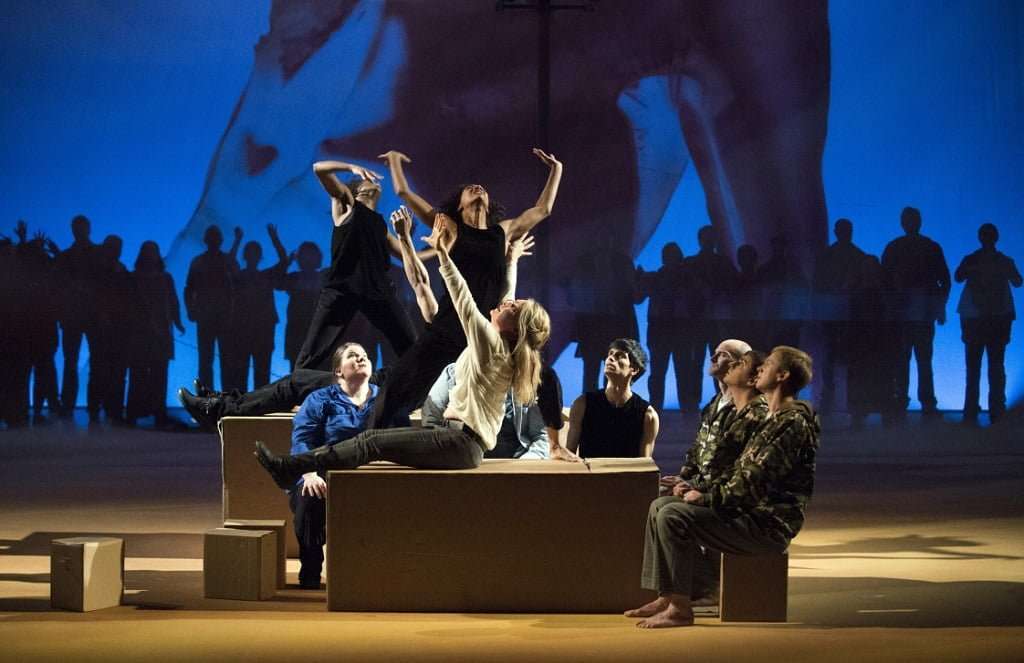 Giving the world stage premiere of John Adams and Peter Sellars’s The Gospel According to the Other Mary is a feather in the cap of English National Opera, a company already closely associated with Adams’s stage-works, such as Nixon in China, The Death of Klinghoffer, and Doctor Atomic. The Other Mary is not a stranger to London though, for the LA Phil and Gustavo Dudamel brought it to the Barbican Centre in April last year (review-link below).

The synopsis that Sellars provides for the eleven scenes speaks of drug withdrawal, Mary being in jail, and “the day of the Lord is at hand”, not only that but Mary and Martha (they are sisters) tend to be at loggerheads, the latter frustrated with her sibling, and anyway they are looking after destitute women in Bethany; Jesus is a visitor there. Lazarus, brother to Martha and Mary, dies and is resurrected. There is rebellion, purifying fragrance, salvation from guilt, Passover, police raids, women arrested, Golgotha, the burial of Jesus, the return of Spring, and a final ‘Earthquake and Recognition’, the latter returning Jesus, now as a gardener. 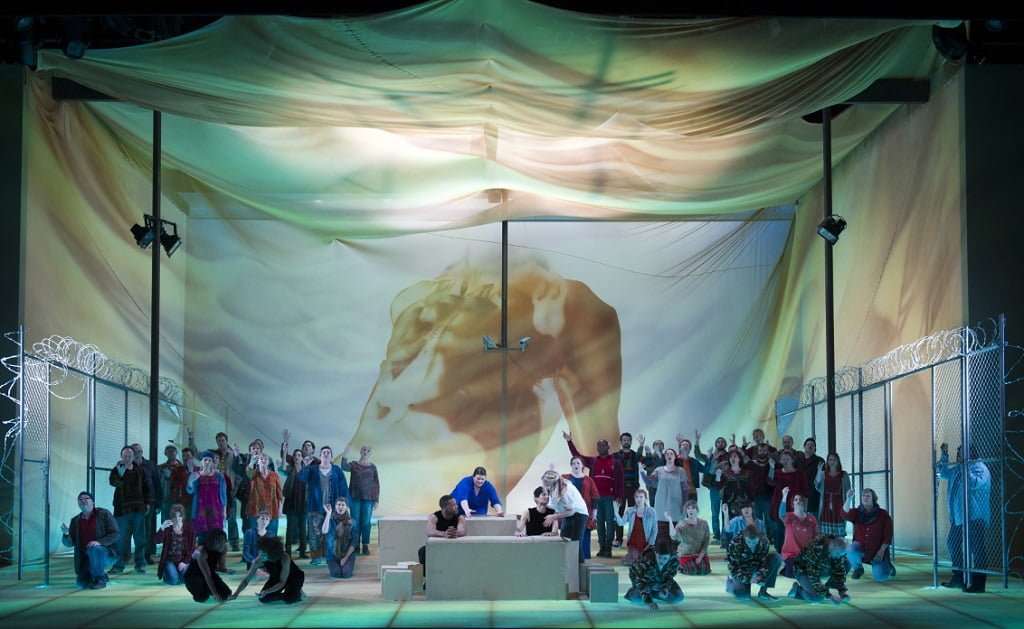 Upon entering the auditorium we see railings and barbed-wire on each side of the stage. In the centre is what could be sand (a sand-coloured stage, certainly), a desert; Guantanamo Bay I heard someone say, the Gaza Strip somebody else, certainly it seems a place of conflict, or for refugees. To the latter’s suggestion of homelessness are cardboard boxes (of different sizes and added to over the work’s course). Sellars’s synopsis is helpful, the English surtitles equally so, although the latter reveal a repetition of Sellars’s sentences that irks. The acting area is essentially non-changing – another drawback – and flooding it with vivid colours can’t disguise that. The story is told – with twentieth-century and point-making updates to the Biblical texts – and illuminated by, or distracted from, by dance and gestures; this is a Sellars production quite literally to the performers’ fingertips. I thought quite a few times that ‘less is more’.

Musically, this can only be John Adams, not entirely the compliment that might seem, for this composer who relies on derivation – of others and himself – has, characteristically, written at length (approximately 135 minutes of music, some 15 more than ENO reckons for) and the score does outstay its welcome, sometimes to tedium. Sure, there is some good stuff here – from pulsating to ravishing – typically superbly orchestrated, yet even so the tangy nature of the cimbalom is over-stretched (which is maybe synthesised, Adams likes samples, the prominent piano similarly) and its use palls quite early on. Nor do some percussive timbres withstand the repetition Adams affords them. But one admires Adams’s virtuosity in this orchestral regard.

Theatrically, there is suspense, there is humanity, and the spectator can be compelled, but there is also a noticeable sagging at times that saps whatever drama there is, and the final half-hour or so is inert. There is a strong case for pruning and making The Gospel According to the Other Mary a one-Act work; that would avoid the longueurs and returning for Act Two to see the same set and have the music start up similarly (punchy and hard-edge rhythmic) to the first one. It may be that Adams will do as he did for Doctor Atomic and create a Symphony; certainly there is plenty for the orchestra alone to make a concert-hall work. 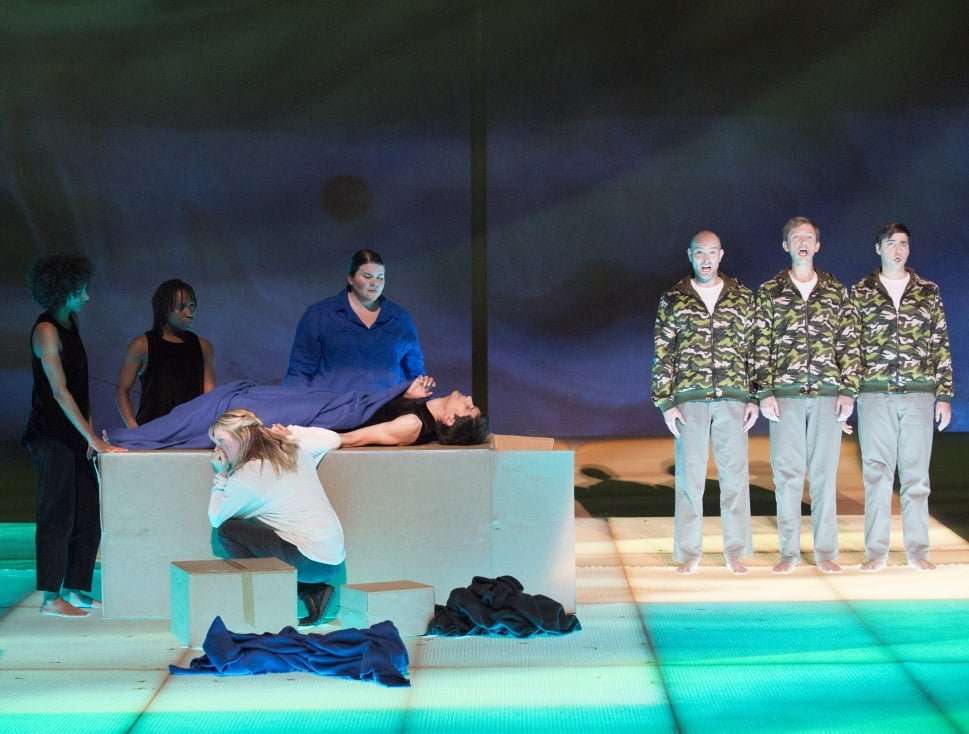 Everyone will have a point-of-view about The Gospel According to the Other Mary – from inspiring to indifferent (I suspect) and to different degrees therein – but probably not hostile. My abiding memory will be of Adams’s use of the orchestra – although at times he steers perilously close to those blockbuster scores for the concert-hall – and I will certainly heap much praise upon the performers. The ENO Orchestra was simply marvellous, and the clarity from the pit and the balance between there and the stage was ideal – but let us remember that two sound designers are credited – and in Joana Carneiro we have a terrific conductor whose technique and commitment to and knowledge of the score seemed faultless. As for those singing, acting, dancing and whatever else Sellars would have them do, heroic is the word: each was unflappable, unsinkable and unstinting, Patricia Bardon, Meredith Arwady and (with an orator’s power) Russell Thomas often remarkable. The splendid ENO Chorus should not be forgotten, either, whether as vocalists or characters. The countertenor trio representing Seraphim, sympathetically written for, made a mellifluous contribution.

Taking his bow at the end, along with the rest of the team, John Adams seemed delighted with what he had witnessed and the reception that welcomed him.