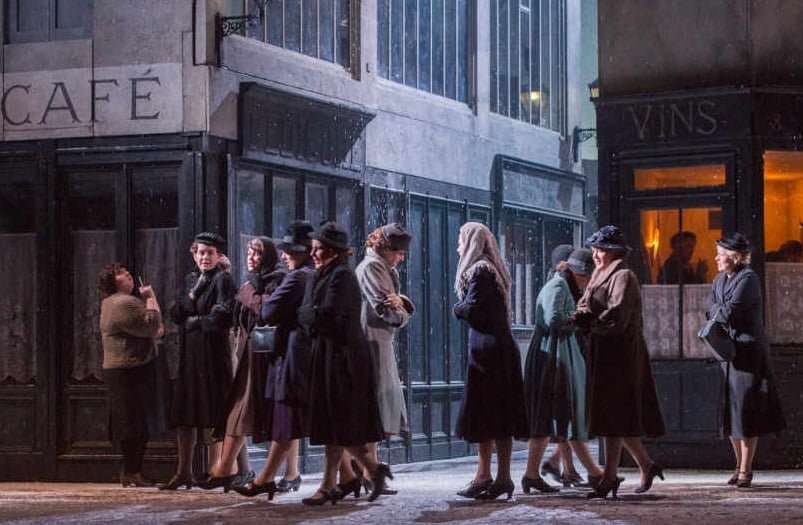 It’s Christmas Eve in Paris. Four impecunious artisans are sharing an attic room. They are bemoaning their respective hopeless lots and festivities are cancelled. Yes, La bohème is back at ENO – and rather wonderful it is too.

This second-night outing suggests that the current generous run of it (fourteen dates in all) is well-worth catching – but I wish you a better audience than the one I suffered: the coughers and chatterers – and to continue the alliteration – the scratchers and the sniffers were out in audible force. Still it says much about the staying power of Puccini’s opera, and this particular production and performance of it, that one remained absorbed and moved by it, overwhelmingly so when Mimi breathes her last as the opera comes to its tragic end.

This is the third revival of Miller’s production and, in the absence of the good doctor, Nataschsa Metherell returns as director. It’s closely observed story-telling, with nothing overt or obvious. Subtle explanations carry the day, whether it’s the friendship of the bohemians, the burgeoning love of Mimi and Rodolfo, or the bickering of Musetta and Marcello. Excellent sets inform the whole: be it the garret, the street-scene bustle of Act Two or its successor’s snowy nocturne. Lighting, never too bright, is also well judged, as are the costumes – to suggest the 1920s; must be that decade for Charlie Chaplin, straight out of a silent film, is in the crowd for Act Two, with a lusty contribution from the Chorus as all manner of Parisians. 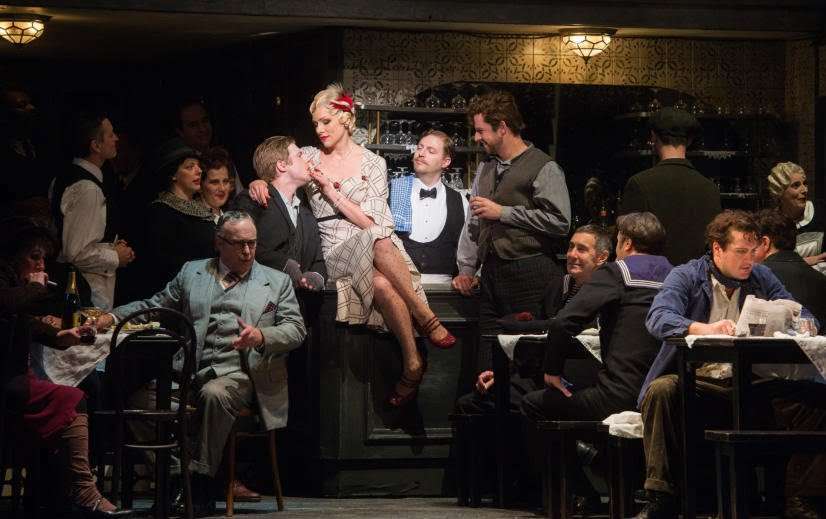 The singing is impressive. Of the four chaps, those taking the roles of Rodolfo and Marcello have the lion’s share, by dint of their respective romances. They have fine voices and are capable of broad characterisations. All four work well as a team when required. Angel Blue, as Mimi, does the joy of first love and of illness-ridden anguish equally well, and her vocal capacity is seductive and – unlike Mimi – robust, although her words are the least clear of any of the singers. The surtitles reveal a sympathetic translation into English by Amanda Holden.

I am inclined to think though that the show is stolen by Jennifer Holloway, who leaves in no doubt that Musetta is the flighty girl about town, dressed to the nines, attention-seeking and a law unto herself. Equally, though, she becomes the Good Samaritan in the final Act and Holloway has this suddenly-caring side of Musetta fully in view as well. She can sing, too.

This timeless and poignant opera is superbly conducted. Gianluca Marcianò’s pacing is ideal, and he has impressed some strong ideas along the way; not only is his approach dynamic and flexible, and fresh and vital, but he is notably successful at securing a good balance within the orchestra and between it and the stage. Furthermore, his concern for detail is illuminating and gratifying; an upward scale from the clarinet in Act Three is but one example of how fine-tuned the playing is, and it is glorious overall, the beauty, power, passion and tenderness of the music never in any doubt. Once again Puccini is the master manipulator of our emotions.

Also worth the price of admission is Andrew Shore’s two cameo appearances, particularly as landlord Benoit; his menacing rolled-R on “rent” was a moment to treasure.