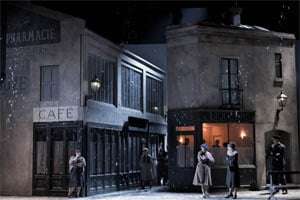 Two years on from its first appearance, Jonathan Miller’s staging of “La bohème” is approaching the end of an extended revival run that’s spanned four wintry months. For its last few performances Alfie Boe returns to the role of Rodolfo that he created for this production in the snowbound February of 2009, and such is the tenor’s popularity that all three nights are pretty well sold out. On this showing, neither Boe’s legion of fans nor anyone else should be disappointed.

As Mimi, she of the frozen extremities, the creamy-voiced Elizabeth Llewellyn continues in her career-defining role. This enchanting lyric soprano brings a vulnerability and passion to the drama that were missing first time round; in that incarnation the opera’s comedy was allowed to lord it over the tragedy, whereas for this revival, overseen by Jonathan Miller himself, dramatic balance is restored and Llewellyn’s Mimi is able to break our hearts. Some of the production’s original problems still persist – for example, Miller rarely allows the unhappy couple to make eye contact so, as far as the audience is concerned, love’s bolt is never shot – but even so there is a far greater connection between the pair this time and Boe supports the ringing maturity of his vocal timbre with a more impassioned and detailed performance than before.

If Puccini ever composed anything finer than Act Three of “La bohème” it’s passed me by, and Stephen Lord conducts an assertive, urgent reading that locates its romantic pulse by tempering energy with compassion and restraint. During the climactic quartet, Roland Wood and Mairéad Buicke are outstanding both vocally and dramatically as the bickering hotheads, Marcello and Musetta, their counterpoint to our sad lovers savage enough to avert any risk of mawkishness.

Buicke is persuasive at intense moments but her voice spreads a little during Musetta’s Act Two waltz, and that famously hummable tune is clouded. In all other respects the supporting roles are characterised and sung with style, colour and variety. The distinctive voices of Pauls Putninš and George von Bergen as Colline and Schaunard respectively complete the motley quartet of young dilettantes, and there is a memorable comic turn from Simon Butteriss as their jobsworth-landlord Benoît.

Jonathan Miller advances the action of Puccini’s opera by three or four decades to a semi-monochrome Paris that evokes, in Isabelle Bywater’s designs, a brand of romantic poverty familiar from the photographs of Brassaï and Cartier-Bresson. ENO, for its part, used this night to bring the opera’s themes even further up to date and sent music director Edward Gardner to the stage to beg a light for the company’s own candle in today’s straitened times. Buckets were jangled during the interval and the looming plight of the Arts was never clearer.