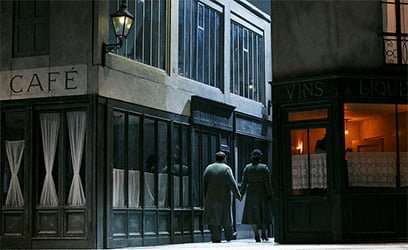 Having tied itself in knots over the questionable quality and technical ambition of Sunken Garden, English National Opera has returned to comfort-zone territory with the second revival of Jonathan Miller’s production of La bohème. As familiarity grows with Isabella Bywater’s detailed, atmospheric recreation of Paris in the drab, Depression-era 1930s, so the staging (new in 2009) as a whole is becoming an ENO/Miller classic, on a par with Rigoletto and The Mikado. In this revival, though, the disjunction between Puccini’s glorious music and the realism of the setting wasn’t so sharp as to be unfeasible, all down to the young, predominantly British cast and exceptional music direction.

If it’s a while since you’ve been moved rather than sadly delighted by La bohème, then be prepared for a performance that tightens its grip by stealth. From the silent, brooding set-changes establishing a Parisian-cum-Edward Hopper, grey, urban isolation to Mimì’s understated entry and prescient opening line “My light’s gone out”, there’s a hardness and unforced momentum to Natascha Motherwell’s revival direction that gather the set-pieces (such as the whole of Act Two or the optimistic opening of Act Four) in their wake – and Act Two, by the way, seems superbly spontaneous and is very well observed. 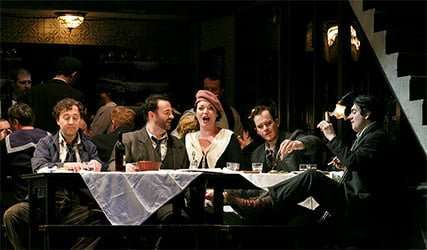 This couldn’t happen without the potent spell cast by Gwyn Hughes Jones’s Rodolfo and Kate Valentine’s Mimì. Hughes Jones is even more effective that he was in the 2010 revival – his connection with Mimì is arrestingly immediate and his attractive tenor has really opened out, distinguished by an easy lyricism and thrilling top notes. But then, he’d have had to be made of stone not to respond to Kate Valentine’s Mimì, whose half-lit, ghostly first entrance sets the tone of her ethereal naivety with unexpected intensity – in this world but already not quite of it. She didn’t put a foot wrong in the brilliantly staged, harrowing third Act (the prostitutes plying their dreary, frozen trade is a very good touch) – ‘O mia vita’ really hit the spot – and the death scene had a devastating directness. Valentine’s acting has a natural charm, her singing is full of warmth and character, and the top of her voice, notably at the end of Act One, is secure and unpressured.

In her ENO debut, Angel Blue has the measure of Musetta as vulnerable, manipulative and edgily feral. She worked the broad comedy of the Café Momus second Act the best I’ve seen in this production, and the glamour of her voice and her looks set up Mimì’s tragedy with pragmatic immediacy. She was well matched by Richard Burkhard’s impressive and imaginatively played Marcello, equally at home in boisterous student ensembles, slyly diverting attention away from Musetta, and giving a high level of heartbreak to his scene with Mimì in Act Three. Duncan Rock and Andrew Craig Brown endowed Schaunard and Colline with a special sympathy and characterisation, both beautifully sung, and Simon Butteriss’s Benoit momentarily stole the show in Act One.