Verdi
La traviata – Melodramma in three acts to a libretto by Francesco Maria Piave after the play La Dame aux camélias by Alexandre Dumas fils [sung in the English translation by Martin Fitzpatrick, with English surtitles] 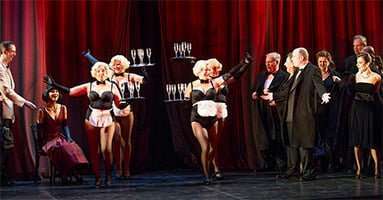 To judge from what I’ve heard about Peter Konwitschny’s productions in Europe, we have got off rather lightly with this La traviata from the “King of Konzept”, his first staging in the UK, and shared with Graz Opera where it was first seen in March 2011. One of its selling points is that Verdi’s opera has been cut and is played as one act with four scenes without an interval, hence a running time of 110 minutes. That’s a loss of about 20 minutes of music, the main excisions being the gypsy and matador choruses and fortune-telling passage in Act Two and the carnival music of Act Three, and with the shortened versions of Violetta’s ’Ah fors’e lui’ and ’Addio del passato’.

For a director whose productions have been criticised for being overburdened with directorial insight at the expense of the music, Konwitschny’s staging for La traviata is similarly pared down. The set (designed by his long-standing collaborator Johannes Leiacker) is a series of curtains, one chair and, for Act Two, a pile of books, which you know will get kicked over – and they do. The front curtains are drawn back to reveal identical sets further back as Violetta’s horizons momentarily expand, and are torn down by the chorus during the Act Two finale so that the stage is empty for her death, when she’s just subsumed into darkness. Her dress merges rather effectively into the swathes of material so that she becomes, as it were, part of the furniture. 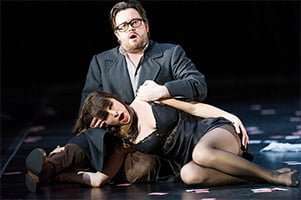 Violetta is a modern-day prostitute whose imminent death (of which she is aware from the outset) is the subject of cynical, salacious fascination for her pleasure-bent friends, played by the chorus with incisively choreographed mannerisms, including a passage, prolonged so we get the point, in Act Two where they throw the playing cards of destiny around the stage. They are the un-dead who expose Violetta as the only one among them who is truly alive. So far, not at all radical, and overplayed with a heavily symbolic if sure hand. Konwitschny’s process of exaggeration enlarges into Alfredo, a nerdy chap in specs and a duffle coat (and hardly the sort of sophisticate to have experienced the passionate spirit and fire of youth Alfredo sings about at the start of Act Two) who seduces Violetta with his bookish ways and sings the ‘Brindisi’ from a book, held with no specific directorial insight upside-down. Germont is an outraged bully of a father, a hypocrite who reinforces his demand that Violetta give up his son by bringing along his brutalised daughter, a girl as geeky as her brother and surely too young to be engaged to anyone. 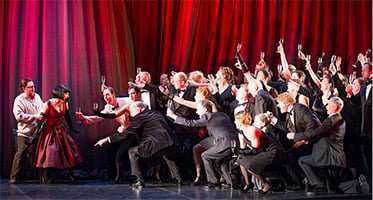 It goes without saying that La traviata has provided endless opportunities for producers when it comes to realising social venality, duplicity and cynicism, expressed through the huge differences between Violetta and Alfredo. Konwitschny has pushed these aspects a bit further, but far enough for his particular beef about the opera to ride rough-shod over Verdi, whose music, and ENO’s generally strong performances, is too strong to acquiesce. There are also modish directorial flourishes, such as characters singing in the auditorium with the house-lights up to implicate the audience in Violetta’s downfall – and long past there sell-by date. It’s by no means opera-lite, but it is rather like a graphic novel, full of contorted, exaggerated, emotive images, which tell you nothing about the opera and its characters you didn’t already know. It’s also shamelessly and arrogantly manipulative, in a way that you can just about accept with, say, Puccini, but which doesn’t enhance Verdi. It’s not so much a case of ‘hate’ as ‘so-what’.

Although I didn’t buy the over-simplistic and undeveloped direction of Alfredo, Ben Johnson’s singing, apart from some moments of strain, was ardent, and his share of ‘Sempre libera’ (sung in the auditorium) made its mark. As Germont, Anthony Michaels-Moore sang with dark Verdian heft, but with a warmth and eloquence as his sympathy for Violetta grows that simply didn’t fit in with Konwitschny’s cartoon-villain concept of the role. The American soprano Corinne Winters certainly had the vocal range and sparkling coloratura for Violetta; she was quite something in ‘Sempre libera’, singing with an affecting desperation, and she produced a finely-spun, intense tone for ‘Addio del passato’ and her final duet with Alfredo (marred by more heavy-handed, emblematic business, now with imaginary curtains as the couple plan a non-existent future). Despite her obvious role as director’s cipher, Winters made Violetta as tragic and human as Verdi intended, with consequent flashes of connection with the audience.

Michael Hofstetter drew a suitably drained sound from the Orchestra for the Prelude to Act One, and conducted (in his ENO debut) with a breadth and fluidity that flattered La traviata’s newly acquired through-composed status.