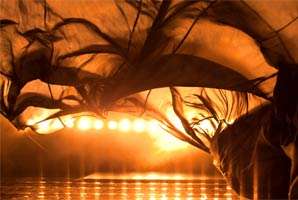 Kaija Saariaho’s opera “L’Amour de loin” first appeared at the Salzburg Festival in 2000. The first night of this English National Orchestra production was its UK stage premiere (and followed a concert performance by the BBC Symphony Orchestra in November 2002).

Saariaho and librettist Amin Maalouf have taken the concept of courtly love as expressed in the writings of the 12th-century prince and troubadour Jaufré Rudel to create an elaborate meditation on idealised romance and on how the unattainability of the beloved becomes the purpose of desire, opening out into the timeless love-substitutes of elegant devotion and analytical obsession, of being in love with the idea of love itself, of the reality of passion being kept at arm’s length.

Jaufré yearns for such a love; a travelling Pilgrim knows of a woman, Clémence, on the other side of the Mediterranean, in Tripoli, who would be a worthy long-distance love-object, and, as it were, brokers the deal. Jaufré then makes the impulsive error of visiting her, but the long sea voyage is too much for him, and he dies in her arms. 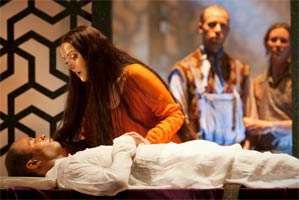 Saariaho has composed a shimmering, shifting soundworld that beautifully evokes the extremes of stylised love, but with enough cleverly placed detail to pick out character and situation to prevent the music from becoming a static, impressionistic wash of sound. Similarly, Maalouf’s libretto embraces both rhapsodic romance and narrative detail with great skill, in Richard Stokes’s elegant translation (which, apparently, the composer has played a part in fashioning).

Music and text have a fey, contemplative feel that is very beguiling, and which, despite the slow pace, rarely sags.Daniele Finzi Pasca’s production, however, is something else entirely, a visual and dance/acrobatic feast that never rests for a moment. Each of the three characters is assigned (rather as in Royal Opera’s recent “Dido and Aeneas” and “Acis and Galatea” double bill, but much more pervasive) a pair of ‘spirits’ who act out in movement and dance the characters’ states of mind. 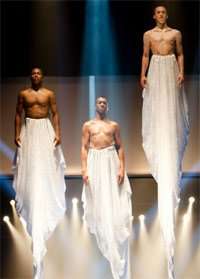 Pasca’s work in acrobatics and physical theatre (which will be familiar to fans of “Cirque Eloize” and “Cirque du Soleil”) cues an awe-inspiring spectacle of cart-wheeling gymnasts, spirits being flown high above the stage, fantastically elaborate stuff involving yards of billowing, diaphanous material, amazing video projections and virtuoso lighting effects. Golly, you might think, as you goggle at someone whizzing death-defyingly through the air or gaze transfixed at the beauty of the floating screens or the video of the sea-journey.

But Pasca overplays his hand, and it seems that once he’s started, there is no stopping him – it almost makes ENO’s current elaborate and highly stylised “Madam Butterfly” seem like a village-hall show, and it isn’t my idea of mannered, internalised medieval angst. More importantly, the fact that it is so overwrought unpicks the intricacy of Saariaho’s music. For all that, though, the production is astonishing and very complex, and if high-camp but blandly unemotional “Cirque du Soleil” theatre values are the thing, this staging certainly delivers.

The three singers do a terrific job, and Saariaho has been careful to place most of the hauntingly expressive but technically undemanding vocal lines in the middle of their ranges, so that the words are clear. Roderick Williams brings the same degree of intensity and eloquence he gave to Vaughan Williams’s “The Pilgrim’s Progress” about a year ago to the troubadour-prince; and within the directorial confines of the role, his acting and singing are focused and very moving. I don’t think I have seen Joan Rodgers in such a dramatically constricted role as Clémence; she handled it beautifully, especially the music leading up to her lover’s death, and she carried the long ecstatic closing section – where the inspiration flags a bit – very convincingly. As the Pilgrim, Faith Sherman was excellent in her recounting of the prince’s love-song (one of the opera’s most beautiful moments) and was a suitably ambiguous presence.

Edward Gardner’s love for the score was evident throughout, exemplified by ravishing playing and singing from the Orchestra and Chorus.

A lot of “L’Amour de loin” is very haunting, and in terms of mystery and illusiveness, it’s in the same sort of area of operatic love-stories such as “Tristan und Isolde”, Pelléas et Mélisande”, “Death in Venice” and “King Roger”. ENO has certainly done it proud.