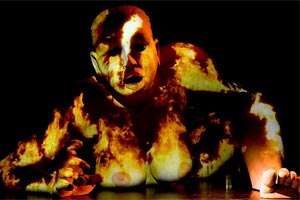 English National Opera gave the UK stage premiere of György Ligeti’s “Le Grand Macabre” in 1982 and now put on the 1997 revision in a production that is visually spectacular and thought-provoking as well as doing the piece musical justice. The team of La Fura dels Baus, who provided the visual display of the Barcelona Olympic’s opening ceremony, has come up with an arresting design.

The stage is dominated by a huge female body, “Claudia”, who fills the stage in a semi-prone position. From behind her various bodily curves and limbs characters emerge and disappear, sometimes elements detach to reveal little sets within or orifices through which characters make entrances or departures, and the whole rotates to reveal the rear view as well. The head can move mechanically and video and light projections onto the whole structure allow an ever-changing sense of both place and time to be presented. The whole is strangely beautiful to look at and yet occasionally intentionally repellent, such as the moment when the body suddenly morphs into a prone skeleton. Like the characters within the opera whose bodies are faced with death either as a result of Nekrotzar’s threatened apocalyptic comet or by other natural or unnatural means the setting provides a sense of ongoing decay. 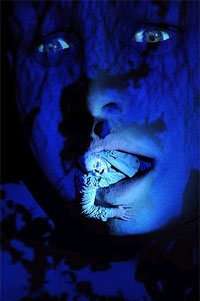 From a musical perspective matters are scintillating as well. Some of the score’s most memorable moments are the interludes. Baldur Brönnimann leads the ENO Orchestra to deliver these evocative sections with playing of extreme beauty and delicacy. The interlude heralding the arrival of Nekrotzar in the third scene, which uses and then distorts the ‘Prometheus’ theme of the final movement of Beethoven’s ‘Eroica’ Symphony whilst maintaining its rhythmic undertow, is an instance in point. The opening, played on tuned car horns, is both exciting and intense, and the prelude to the final scene has a comforting, bright and airy feel to it – perfectly matching the rather ethereal image of Piet the Pot and Astramador floating away above the stage; and the musical duetting of Amando and Amanda though the gorgeous blending of the voices of Frances Bourne and Rebecca Bottone lent these passages an almost Straussian headiness and apt eroticism.

The success of the work also very much depends on the singing and acting of the cast and their ability to get the words across and energise the surreal qualities of the plot. As the Breughel-inspired “common man” Piet the Pot was well sung and characterised by tenor Wolfgang Ablinger-Speerhacke. As the transvestite astronomer Frode Olsen, a Grand Macabre veteran who appears on the recording conducted by Esa-Pekka Salonen, revealed a strong and resonant bass, and he did not overplay the submissiveness of his character’s nature. His rather more dominant and sexually experimental wife Mescalina has some tricky music to sing and, as ever, Susan Bickley made light of the technical difficulties and much of the comedy, particularly in her invocation to the gods to provide her with a lover more potent than her husband. Susanna Andersson’s bright high-flying coloratura brought allure to Venus and her undecipherable twittering made her portrayal of the incompetent paranoid security chief Gepopo very funny indeed. 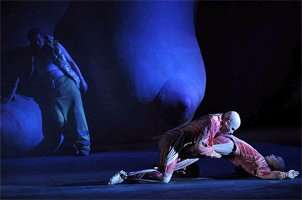 Pavel Hunka’s Nekrotzar was a little more problematic. He certainly has the vocal security for the part, but the demonic and driven nature of the character was lacking and one could not always sense why Nekrotzar terrifies those around him. Andrew Watts made an almost endearingly weak Prince Go-Go; his fluid countertenor tones falling gratefully on the ear. Daniel Norman and Simon Butteriss were amusing as the bickering ineffectual ministers – although their interplay is one of the moments where the libretto and writing sometimes labours the point. The chorus and actors made much of their contributions – the brief dance tribute to the late Michael Jackson was an amusing interpolation.

The directorial team ensure that the drama generally maintains its pace and did not fail to emphasise when operatic conventions were being subversively sent up – such as Nekrotzar’s almost ‘catalogue aria’ description of his former destructive activities, or Piet the Pot’s guying of a range of tenor ‘sobs’. Even the convention of all the characters reappearing at the end to ram home the moral of the tale (such as in Mozart’s “Don Giovanni” or Stravinsky’s “The Rake’s Progress”) was done with humour and point.

This staging will probably win Ligeti’s music many converts and I’d certainly advise trying to catch a performance: after all, and as “Le Grand Macabre” tries to tell us – you never know whether you’ll get another chance!