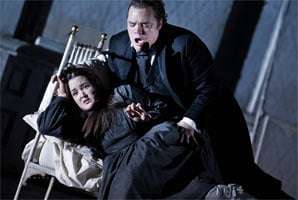 David Alden returned to direct his production of “Lucia di Lammermoor”. First seen in February 2008, it is hardly a ‘traditional’ construct, yet it does have sufficient devices to make one think about the characters’ motivations and circumstances – though quite why Lucia is made to be so very young is questionable (perhaps aged fourteen): would a girl of this tender age really be in love with one man (Edgardo, laird of Ravenswood, in whose estate Lucia lives with her brother) whilst her brother (Enrico) succeeds in marrying her off to Lord Arturo Bucklaw (only for Lucia to murder him on their wedding night)?

Regardless, Lucia is bullied by her ambitious brother, and it is his expediency with events, and his own selfish desire, that ruins both Lucia and Edgardo, no doubt Enrico, too. In Alden’s mind, everyone is an intruder on someone else’s property: characters enter through windows rather than doors, and no-one is where they should be. The only colour allowed is the red of the blood that soaked Lucia’s wedding dress. Otherwise, the two thoughts (love and revenge) of those involved were matched by the black-and-white designs. 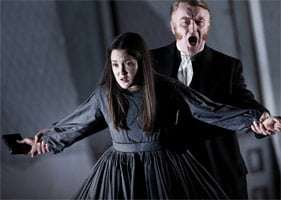 “Lucia di Lammermoor” is one of the premier bel canto operas, so it might have been a surprise that there was so little beautiful singing, but this reflects the anxiety that exists between all the characters. Anthony Walker got the evening off with a brooding and intense account of the opening music, and the playing of the ENO Orchestra was suitably atmospheric – the addition of the glass harmonica for Lucia’s ‘mad scene’ gave it the required dreamy and delirious quality (a pity that Anna Christy’s account did not match those qualities) – and exciting, though there were many occasions where pit and stage did not match.

The opera’s structure is taut, save the last two scenes, which rambled and, certainly, the usually-cut final scene needed a snip as only a top-notch performance can carry its stormy and extended discourse: a demonic Brian Mulligan (Enrico) had earlier dripped venom towards Barry Banks’s Edgardo, so this was a sorry let-down.

Anna Christy’s coloratura occasionally seemed very constricted, hampered by inadequacies in the use of the English language. The ‘mad scene’ was dramatically inert, too: hammy acting from the chaplain of Clive Bayley did not convince of his terror (caused by the sight of Arturo’s bludgeoned body and of Lucia’s deranged state) and as we are supposed to be terrified because he is so affected, this was a problem. As usual, Bayley was on top of the musical demands.

The singing was, across the board, occasionally brittle, and the chorus was too often overpowering: such first-night nerves ought to overcome themselves.