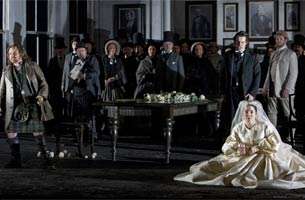 This was the second performance of English National Opera’s first production of Donizetti’s “Lucia di Lammermoor”, performed in a recent Critical Edition. Gone are many accretions that are ‘standard’ performing practice and which have helped secure the opera’s hold in the repertory. These changes include Lucia’s extended cadenza in the latter part of her ‘Mad Scene’. Indeed, the whole soundscape of that section is now transformed from the usual flute obbligato by the eerie sounds of a glass harmonica (played here by Alexander Marguerre). This was, as Parker’s interesting programme note informs, Donizetti’s original intention. But for reasons of egos, finance and expedience the idea was dropped before the premiere and the passage re-scored for flute. This is not the first time that London audiences have heard it this ‘new’ way – for a glass harmonica made an appearance in the last Covent Garden production. For ENO, David Alden’s staging gives justification for this ‘new’ sound – a haunting and disturbing consequence of what has gone before, and perhaps bringing a sense of what the huge contemporary readership of Scott’s novel found so magnetic about the tale. 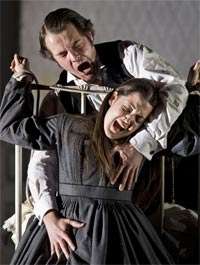 A traditional production of ‘Lucia’ is almost unthinkable these days, and Alden’s production, set in Charles Edwards’s atmospheric and almost monochrome sets, turns this story into a stark one of a young girl brutalised by her brother and his associates into betraying her lover with disastrous consequences. Alden places the drama in the time of Scott, and makes the character of Lucy very young indeed. Nobody comes out of it very well. Enrico, single-mindedly pursuing Edgardo to the death, is not above sexually assaulting his young sister, and the presence of the priest Raimondo on the margins of that encounter make the scene between the siblings very uncomfortable given the suggestion of his compliance. Indeed ‘the church’ is presented very much as a negative and hypocritical presence, not least – in a scene that is often cut – when Raimondo turns on Normanno and blames him for the whole sorry affair.

Edgardo is not so much the Romantic hero but pursuing his own hot-heated vengeance against Enrico. Poor idealistic Lucia does not really stand a chance. Anna Christy’s portrayal really helps provide the focus of the production, given her credibly frail and juvenile appearance and the rather girlish quality of her voice. The lack of tonal variety perhaps runs the risk of being rather one-dimensional in vocal terms, but it is put at the service of the director and with her slightly white tones and her excellent diction and inflection of the text it makes for a compelling performance that quashes any such fears. Her coloratura is agile and often dazzlingly secure, as devotees will expect, and she certainly has the stamina needed. It is an impressive assumption by any standards, and all the neuroses of the character are charted with unsettling veracity. If one was being mightily picky, then there is a wish for a proper trill, but everything else was there. Her narration of the ghost-story on her first appearance, abetted by Sarah Pring’s strong Alisa, was gripping and exciting as a narrative, and her ‘Mad Scene’ held the audience silent. 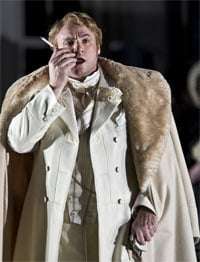 Barry Banks, sporting a leather coat over his kilt, was a fine Edgardo, bringing out the fiery nature of the Scot as well as his charm. He sang the ‘Final Scene’ very well indeed, preventing it from becoming the anticlimax it can sometimes be. Mark Stone was the consistently nasty Enrico, and sang well even if at a rather unrelenting forte. His diction was superb, although sometimes his pronunciation makes his words and vowels sound rather clipped. Curiously whenever he sang he made Amanda Holden’s trim new translation sound rather old-fashioned, which it did not when sung by the others. Paul Whelan, who had come to rescue of an indisposed Clive Bayley part-way through the first night, deputised once again and delivered a solidly sung account and a disturbing dramatic one. Dwayne Jones was an effective Arturo, even if his appearance and that of his retinue was slightly ‘camp’, and Michael Colvin managed to make much of the manipulative Normanno.

In this production, the chorus spends much of its time watching events unfold as if at a Victorian freak-show; these singers’ presence added to the claustrophobic atmosphere. Ensemble between them and the pit was not ideal to begin with, although it later settled. Paul Daniel conducts an exciting account of the score; one that kept things on the move and avoided indulgence while accommodating the singers. The Orchestra sounded very well serving up Donizetti’s distinctive tinta, not least the wind and harp parts with brass contributing forcefully at the start of the ‘Wolf’s Crag Tower’ scene between Edgardo and Enrico, complementing the rather loud amplified thunderclaps.