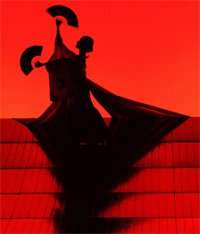 This third revival of the late and much-missed Anthony Minghella’s staging of Puccini’s “Madam Butterfly” here received a great first-night performance. Minghella’s is a handsome staging; the singing was apt to the unfolding tragedy and Edward Gardner and the Orchestra of English National Opera were potent and energetic music-makers.

The tale of casual seduction with dire consequences is fairly literal told, not scoring any obvious geopolitical points – such as America conquering, destroying and then abandoning. Nagasaki is not overtly represented but there is plenty of Japanese imagery: sliding panels for doors and walls of houses, fabulous costumes, and lanterns, all creating an oriental atmosphere. Stark lighting, such as when Cio-Cio-San reveals her son, heightened already-wrought emotions. A puppet, worked by three expert puppeteers, represents Cio-Cio-San and Pinkerton’s son. 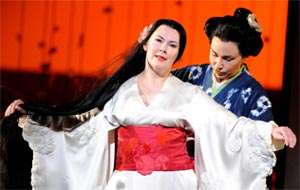 Choreography and direction is purposeful, with even the performers’ bows at the end staged-managed. Without being a caricature, the mannerisms of the locals were meekly Japanese. Moments such as when Pinkerton was getting married to Butterfly emphasised his ignorance of, and impatience with, Japanese culture – he was boorish and visibly wanting to hurry things along.

Most impressive was the Orchestra, alive to every nuance of Puccini’s imaginative score. A delight on the ears throughout, Edward Gardner heightened details for dramatic effect, not least doom-laden timpani rumblings; moments of humour – such as the occasional references to “Star-Spangled Banner” – came off without sounding alien. When Goro is discovered eavesdropping on Butterfly there was a thunderous eruption from the orchestra, Gardner maintaining a long line of tragedy.

Judith Howarth is an experienced Butterfly, able to summon youthful naïvety – she is only fifteen when she marries Pinkerton – whilst generating pathos at her abandonment by Pinkerton. ‘One fine day’ (‘On the horizon one day’ in David Parry’s translation) was touching. Admirable, too, was her clarity and projection in both the wrought and tender moments. Butterfly is a tragic figure and even her wedding – underlined by the orchestra – was weighed down by impending doom. 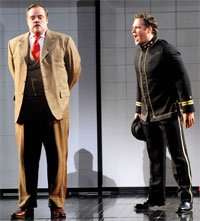 The Pinkerton of Bryan Hymel took a while to warm up. His initial contributions lacked lyricism, there being harsh edge to his vice, though he showed no fear when hitting top notes. The long love-duet between him and Butterfly was touching. Brian Mulligan as The Consul, Sharples, was much more ‘in the part’, and delivered a sensitively-sung performance. His paternal concern for Butterfly, when giving her the news of Pinkerton’s new life in the US, was tender, and with flawless enunciation.

Christine Rice’s Suzuki (Butterfly’s maid) was an ideal partner to Howarth, the former’s occasionally-energetic mezzo contrasting aptly with the latter’s despondent soprano. The minor part of Yakuside, Butterfly’s Uncle, was taken up by Philip Daggett with malicious intent. He is angry at her for renouncing her Japanese heritage, and was dripping venom with words of disgust. Michael Colvin ably displayed his hearty tenor, capturing ruthless aspects of Goro.

It is a pity that there is an interval in the middle of Act Two. It maybe necessary for various stage effects but to break up the action (at the point where Butterfly learns that Pinkerton has another wife and is in Nagasaki) seems a selfish directorial decision

Overall, though, this is a production not to be missed.