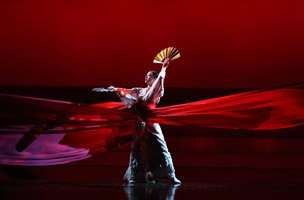 It’s not a new idea to employ film directors in the opera house. For example, such alumni as Peter Hall and John Schlesinger became known just as much for their opera direction as for anything else, although both came to prominence by working in the theatre. For his first attempt at opera direction, former playwright turned screenwriter and director, Anthony Minghella had an instant success in 2005 with his staging of “Madam Butterfly” for English National Opera. It is now on its second revival and shows no signs of losing its impact or popularity, no doubt because he employs filmic techniques to enhance the drama. This is not to say that he actually uses celluloid itself, as Sally Potter did in last season’s disastrous “Carmen” for ENO. Instead Minghella composes his stage-pictures as if he were directing a movie and the result is an astonishing piece of musical stagecraft but one that is entirely theatrical. 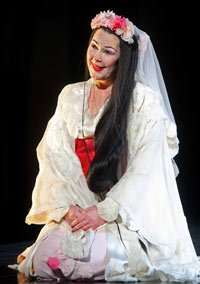 It is the combination of colours, costumes and effects that make this one of the best-ever productions of the opera. Luckily the innovations are not of the kind that belittle the work or make you wonder what the hell you are watching because what you are seeing here is something akin to a Hollywood musical, and I mean that in the nicest possible way. Or, if it’s not Vincente Minnelli circa 1955, it could be one of the movie melodramas of Douglas Sirk who dealt in garish plots, garish people and garish outcomes. But the costumes and set designs are particularly fine, with swathes of bright red cloth, heaps of flowers, oriental lanterns on sticks, origami paper birds that represent robins nesting in spring, and blossoms falling from the trees, perhaps representing the deflowering of the fifteen-year-old virgin. These aspects, coupled with some impressive choreography by Minghella’s wife Carolyn Choa (who also directs this revival), help to raise the whole production onto another level of understanding and, despite its penny-dreadful plot, allows us to see the opera in a totally new light. 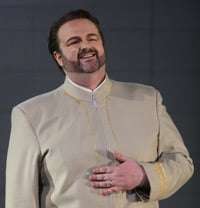 The origins of “Madam Butterfly” are pretty complex, having been inspired by many different sources, including the play by David Belasco, itself based on John Luther Long’s short story which was based on some of Pierre Loti’s tale of “Madame Chrysanthème”. Wherever she came from, Co-Cio-San, despite her tragic outcome, is a very strong young lady who will not do what everybody tells her to do. She ‘marries’ Pinkerton, an American naval lieutenant, for the sake of her son. She is a poor geisha girl and getting poorer by the minute, so wants to be an American living in the US but at fifteen years old she knows little of the real world. At the end of the first act, after a very romantic scene between Butterfly and Pinkerton, and where all the design stops are pulled out, the lieutenant picks her up and carries her off in order to bed and impregnate her with the child that Butterfly thinks will be her passage to America. When Goro, the marriage broker, who can only envision unhappiness if Butterfly continues her liaison with Pinkerton, presents Butterfly with an alternative, rich marriage, she will have none of it and refuses to wed Prince Yamadori. However, Butterfly’s strength is also her downfall. 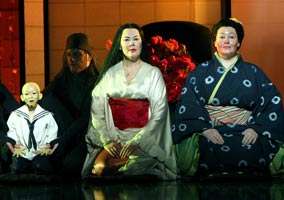 The tragedy is told beautifully as it unfolds, illustrated by aspects of ritual and wedding traditions that are quite different to those in Europe and America. Butterfly’s tunnel vision only makes her believe what she wants to. We have of late had a tradition of actress-singers who actually look like the parts they are playing. Now, Judith Howarth is no fifteen-year-old but she gives every impression of being young in her skittishness and romantic delusions. Vocally too she sustains the part extremely well and gives a really beautiful account of ‘One fine day’. The Suzuki of Karen Cargill is also cast from strength and she too gives a moving performance as the loyal servant who knows that Cio-Cio-San, already rejected by her family and friends for her liaison with the American, is going to end up unhappy and alone. Gwyn Hughes Jones is a solid Pinkerton but meets his match in Ashley Holland’s Sharpless: their scenes together are outstanding, the two voices battling for the fate of Butterfly.

The child and some of the other minor characters are ‘played’ by almost life-size puppets from Blind Summit Theatre performing in the Japanese Bunraku tradition, with shrouded black figures manipulating the dolls to brilliant effect. The child looks a little small even for a three-year-old but it is astonishingly moving the way he turns his head and looks quizzically at his mother. Another tiny puppet figure of Butterfly in her white death robe plays out her fate in a prologue to the last scene that is surprisingly even more moving, although, as Brian Conley might say “it’s a puppet!”.

Musically, David Parry evinces some splendidly dramatic playing from the English National Opera Orchestra. One cavil: with the build-up to the final confrontation and Butterfly’s death, it is a pity that there has to be a second interval after the ‘Humming Chorus’. Not continuing means that the tension built up has to be recreated again. However, the last scene is a true tear-jerker as Butterfly has to say goodbye to her son, having blindfolded him first, and then ultimately also has to says farewell to the world by killing herself with her father’s sword. With not a dry eye in the house, this one will continue to run and run.